Artwork to honor Sicilian producers of the cantaloupe Rubino F1 The ceremonial unveiling of a painting entitled “The sweetest fruit” took place in the city hall of Licata (AG), Italy, in a cordial atmosphere and in compliance with the anti-Covid measures. The painting symbolizes a moral collaboration between the Sicilian city and the seed company HM.CLAUSE. 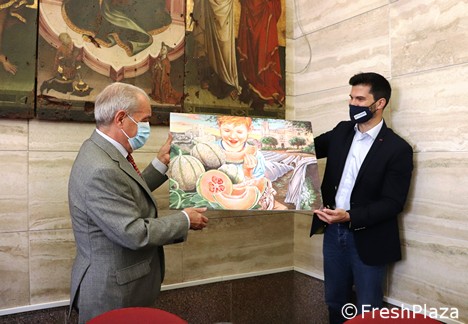 On the left, the mayor Galanti receives the painting from the hands of the general manager Berthe

The city councilor, Vincenzo Graci, and the mayor Giuseppe Galanti, the latter also in his role as an agricultural entrepreneur, welcomed the general manager of HM.CLAUSE Italy, Emmanuel Berthe, who was accompanied by the company’s regional leaders, and handed over to the city the painting created by the Sicilian artist Gaetano Guarnaccia.

Group photo with the work entitled “The sweetest fruit”

The initiative takes its cue from the specialization of a territory, such as Licata, in the cultivation of cantaloupe, a leading product of HM.CLAUSE, which has been adopted as a variety by many local farmers and beyond.

The work commissioned by the seed company pays homage to the farmers engaged in this cultivation, and 200 lithographs have been given to the producers of the territory. 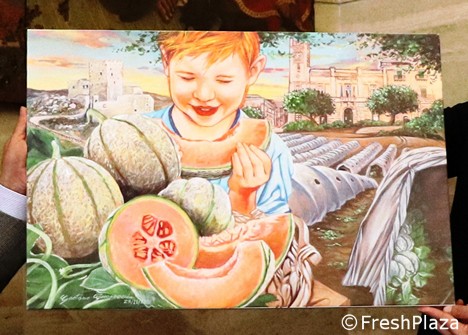 The painting portrays an infant who personifies the joy of eating the best products of the land, with a background that reproduces real elements of the territory.

Mayor Galanti extended words of appreciation for this highly symbolic initiative, while General Manager Berthe expressed his gratitude to the workers of the land who adopted the Rubino F1 retato melon, launched on the market in November 2020, precisely in Licata.

Galanti, who comes from a family of farmers, provided interesting ideas for the re-launch of the sector, backed by his expertise in the field, with a focus on the socio-economic development of the city. Berthe, in turn, endorsed the first citizen’s point of view, emphasizing the strategic importance of Licata for HM.CLAUSE Italy. 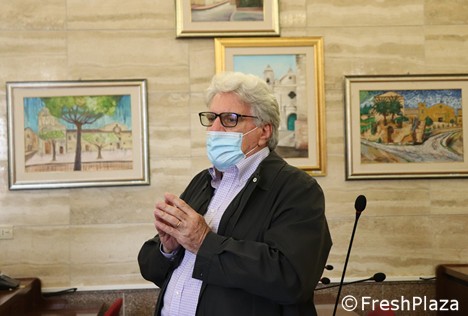 Ignazio Blanco, HM.CLAUSE Italia sales manager for Sicily. In a brief speech he spoke about the crucial role of agriculture in Sicily.

One year after its launch, the Rubino F1 variety has kept its promises and now covers 200 hectares of production in the Licata area alone. At the moment, the commercial season is promising and the added value of Rubino F1 provided the company an extra gear to stand out on the main Italian markets.