Supplies of mangoes have been tight over the past month.

“The smaller sizes have been a bit more available and larger sizes have been tight just due to sizing issues in Mexico,” says Gary Clevenger of Freska Produce in Oxnard, CA, noting the growing regions had seen some cooler temperatures. Currently, most mango supplies are coming from Southern Mexico, Oaxaca Guerrero Michoacán and Nayarit. Competing supplies are also coming from Guatemala and some from Nicaragua.

He does add that so far though, production is ahead of where it was last year at this time and quality on mangoes has been strong. “We have been moving Tommy Atkins and Ataulfo and later in May we will ship Kents and in August, Keitts,” says Clevenger. Meanwhile Ataulfo (Honey mango) will wind down in July.

Demand for mangoes has been good as well. “Consumption has been increasing every year. People understand the benefits and flavor profile and see them at their retailers year round,” Clevenger says. “Trying them at restaurants helps drive consumption at retail level as well. We anticipate mango consumption will double over the next five to seven years.”

Solid pricing
And on pricing, Clevenger says it’s been good so far this season. “At this time last year, yellow varieties were lower. But pricing differences all seem to level out due to differences in timing from one region to the next. Demand this year seems to be very good on all varieties, especially yellow varieties.”

As for Freska, Clevenger adds it has just started shipping some bagged mangoes to customers on a trial basis. While the company offers organic yellow and red varieties of mangoes along with Fair Trade certified mangoes, it’s also been growing its dried organic mango business with individual pouch bags. 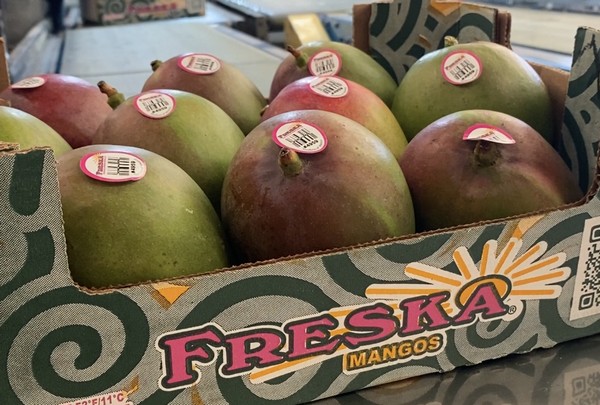 Looking ahead, he says volumes will continue to come from Michoacán, Jalisco, Nayarit and later, southern Sinaloa. “We expect to see plenty of volume to supply markets at promotable prices,” says Clevenger.