At the Dortmund wholesale market, daily business continues despite Corona. “Because of the cold snap, asparagus and strawberries from the region are in relatively short supply. If we take April/May in the previous year as a benchmark, 20 percent less volume is now being handled. But that was also rather an exception,” says Alexander Feldenkirchen, who is a third generation operator to run the wholesale market company of the same name.

“Strawberries are now becoming visibly scarcer, there will certainly be shortages soon,” Feldenkirchen said, pointing to a gradual increase in prices. “Due to the lousy supply situation for German strawberries, we will probably have to rely more on Dutch and Belgian batches until mid-May, while in other years we have already been able to largely do without imported goods at this time of year.” 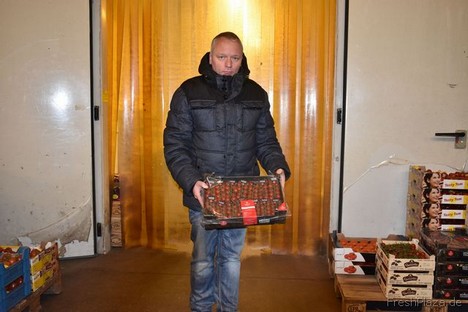 The wholesaler also expects similar market developments for other domestic products, such as outdoor vegetables. “There, from today’s perspective, we will also be able to purchase larger quantities from the region much later.”

Declining procurement of goods by food retailers
In general, consumer purchasing power seems to have diminished in the wake of the ongoing Corona crisis, Feldenkirchen believes. “The weekly market traders buy from us as usual, which actually works as in pre-Corona times. Normally, however, food retailers also purchase part of their fruit and vegetable requirements from the wholesale market. That is now becoming noticeably less, because instead they now buy almost exclusively through the central offices.”

Vegetable trade for over 60 years
The Feldenkirchen company has been based at the Dortmund wholesale market since the 1960s and serves a wide range of customers with fresh fruit and vegetables every day. “We have inevitably had to expand our range in recent years. In terms of customers, the focus is increasingly shifting from food retail stores to specialty stores and weekly market traders. That’s where we have found a loyal and consistent clientele.”