In the Netherlands and Belgium, the unlighted tomato production is underway. Around Easter, prices were still at a high level, but increasing volumes may start to put pressure on the market. Italy also had a good week. There has been a great demand for tomatoes, especially from Germany. The Spanish season is coming to a close within 6 weeks and, in general, prices have been on the low side. South Africa is dealing with shortages due to the impact of heavy rains and Mexico doesn’t yet have great volumes available either. 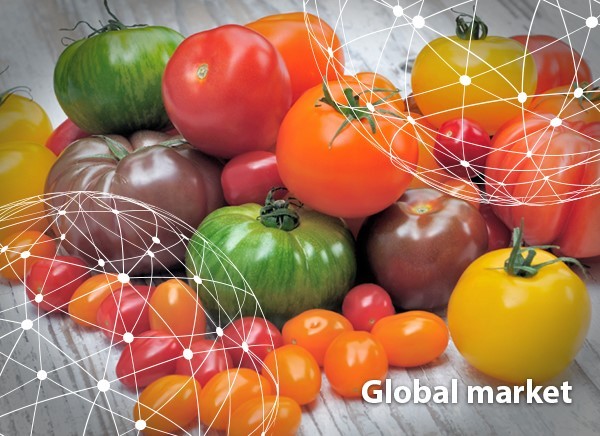 The Netherlands: What will happen in the market after Easter?
The unlighted tomato production is underway in the Netherlands. Traditionally, this generates excitement, given the uncertainty about how the market will absorb those extra volumes. Ahead of Easter, which happened early this year, prices were still quite high. The smaller tomato varieties were particularly popular, resulting in good prices.

At the beginning of week 14, however, prices seemed to drop. The prices for trusses were higher than for loose tomatoes. The price drop is not unusual for the time of year, but with the coronavirus still taking a toll everywhere, the question is how the market will respond to the rising volumes.

It is also unclear whether prices will come under (additional) pressure. This hasn’t really been the case so far, but the market conditions could quickly change. Meanwhile, there are still plenty of imports, with large volumes from Almeria. Other Northwest European growing areas will also increasingly come into production; however, these will arrive later than those in the Netherlands.

Belgium: Reasonably stable prices for specialty tomatoes
After a period of very high prices due to a limited supply, the tomato market has stabilized somewhat. The production from traditional crops will arrive soon, which will result in greater volumes on the market. Specialty tomatoes reached very high prices, but now these are fairly stable. Beef tomatoes are the most expensive at clock auctions.

Germany: Great supply, sales vary by region
In Germany, there is currently a great supply available. Vine tomatoes come mainly from Spain, the Netherlands, Turkey and Italy and have become slightly more expensive. Cheaper imports from Turkey were in great demand at the wholesale market in Frankfurt. Among the larger tomatoes, the also relatively cheap batches from Morocco have dominated. Domestic cherry tomatoes currently cost around 8.50-9.50 Euro/kg. The conditions in the beef tomato market differ per region. In Frankfurt, sales were slow to get off the ground; in Hamburg, on the other hand, they quickly picked up speed. In Berlin, prices for Belgian beef tomatoes went down due to the presence of cheap Moroccan batches. Across the board, tomato prices are significantly higher than last year.

Italy: In recent weeks there has been a high demand for Italian tomatoes
In recent weeks, there has been a high demand from abroad for Italian tomatoes. According to a trader, orders for vine tomatoes, cocktail tomatoes and cherry tomatoes have lately been arriving especially from Germany. Vine tomatoes are one of the top products and are normally sold in bulk in Germany and Austria. The other varieties are usually packaged. In recent months, packaging costs have increased worldwide due to higher raw material prices. For the time being, the big tomato producers have been able to keep costs in check, but in the short term they could be forced to raise their prices.

Regarding the prices, on April 7, 2021, at the wholesale market of Vittoria, in Sicily, small tomatoes such as the plum (2.56 Euro/kg), cherry (1.69 Euro/kg) and midi plum (1.81-1.62 Euro/kg) did well. The other segments are somewhat lagging behind, not always exceeding 1 Euro/kg and fluctuating very close to the production costs. The 2021 processed tomato marketing campaign is marked by great uncertainty. In Italy, the acreage is expected to grow by more than 25%. Some producers say that “during the first lockdown in March 2020, there was an extraordinary race to hoard canned tomatoes. We wanted to learn from the experience, so that we would not be unprepared.” The climate issue is a very big risk factor for the whole supply chain.

Spain: Export season to end in six weeks
The Spanish tomato export season will come to an end in about 5 to 6 weeks, and from then on, only the production for the domestic market will be left. At the moment, some European traders are already switching from the Spanish production to the Dutch, Belgian or Hungarian tomatoes. There is a lower presence of pests this year. Calibers are small at the moment and prices are acceptable after a good March, when there was a slight shortage. Nevertheless, the season has generally been weak in terms of prices, with January and February being the worst months. The Spanish tomato acreage continues to decline year after year, losing ground to Moroccan tomatoes (especially round loose tomatoes) and to the Dutch (especially vine tomatoes). The Spanish trade window is getting smaller and growers are therefore switching to other crops, such as bell peppers, zucchini, eggplant or cucumbers.

South Africa: Tomato shortage will persist throughout April
Heavy rainfall in January and February has had a significant impact on tomato volumes in South Africa, as it has led to increased pressure from pests (growers cannot get to the field to spray) and more spoilage. Also, when it rains for so long, flowers fall off and the fruit set is poor. The result has been a shortage of tomatoes that is expected to continue throughout April. There is also still a shortage at the market in Johannesburg. According to a trader, there were about 300 pallets of tomatoes available one day, which is a very low supply for the Johannesburg market.

The end of the season is near for tomato producers in the Western Cape, while producers in Limpopo and Mpumalanga Lowveld are supplying the winter market. Traditionally, there are lower tomato stocks in autumn (April) and spring (October) in South Africa. Prices range from R20 (€1.15) to R30 (€1.7) per kilo, with some consumer resistance to the high prices.

United States: Abundant tomato supply
There are plenty of tomatoes on stock. “There has been an abundance of larger round tomatoes for about six weeks,” says a Canadian trader. Tomato growing regions, including Mexico and Florida, have had good weather conditions and the production has been impacted by it. “We’ve also recently seen an upsurge of Canadian greenhouses,” says the trader. “This year, more than in previous ones, winter tomatoes continue to be shipped from greenhouses, especially in Eastern Canada. The production has almost doubled.”

The lack of demand from the food service sector continues to take a toll on the tomato industry, while the retail demand remains stable. All of this has resulted in some lower prices that are also at two different levels. “The prices of regular round tomatoes are quite low, but I am convinced that the situation will change by the end of April or the beginning of May,” says the Canadian trader. “Recently, however, the price of datterino tomatoes has fallen. There is a huge supply of plum tomatoes, as opposed to two weeks ago.”

Mexico: Volumes to increase soon
The Mexican tomato production has remained stable, but volumes are currently a bit low, as the production cycle is coming to an end for many growers. After a few weeks of high volumes and low prices, this is not a major problem for the market, which is now picking up. With the production cycles following each other, the volumes will soon grow again, but the market demand (especially in the US) is increasing (the foodservice is slowly opening up, which helps), so the market should be able to absorb those volumes in the coming months.

China: Specialty tomatoes increasingly popular among Chinese consumers
In recent years, more and more high-tech greenhouses have been installed in China and the use of high-end techniques for growing tomatoes has become more common. The standard of living of Chinese consumers is improving and this is raising their awareness about healthy eating; a trend that has only become stronger during the Covid-19 pandemic. High-quality tomato varieties with a high nutritional value are enjoying greater popularity among consumers. The purple Yoom tomato has successfully entered the Chinese market. Some other varieties of cherry tomatoes have also been well-received by local consumers.

TomatoesNZ invested in a promotional campaign during the peak of the summer season, from mid-November to late February, when the supply was abundant. The goal of the social media campaign was to increase the purchase frequency by encouraging consumers to add tomatoes to their weekly shopping basket under the new name “NZ Tomatoes.” The campaign was declared a success, with approximately 10,000 engagements in the social media platforms.