After a Catastrophic Sales Plunge, the Salad Bar Is Reimagined 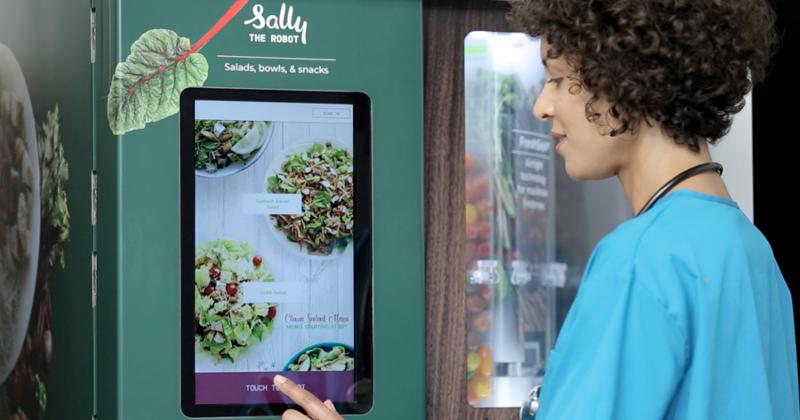 Self-serve salad bars have long been a boon for grocery retailers. Customers love the convenience of creating just-to-their liking combinations of fresh greens, vegetables, toppings and dressings, and retailers appreciate the pay-by-the-pound profits.

While sales had been declining in the years before the pandemic—largely due to the rise of fast-casual salad chains such as Sweetgreens—salad bars continued to bring in significant revenue. In the year before the shutdowns, according to Chicago-based market research firm IRI Integrated Fresh, total U.S. multioutlet dollar sales for the deli salad bar category totaled $436 million and volume sales reached 63 million pounds.

However, in the 52 weeks ending March 21, 2021, sales totaled just under $27 million—a 94% drop from the previous year—and volume sales plummeted 93%. To weather the self-serve shutdowns, many grocery retailers stocked salad bars with premade grab-and-go salads or used salad stations as display cases for packaged goods from other areas of the store.

Now, as vaccinations roll out and restrictions ease across the country, grocery retailers are reimagining their salad bar setups for a post-pandemic future.

“We always challenge ourselves to build best-in-class displays,” says Jamie Collins, VP of advertising and marketing for Chesterfield, Mo.-based Dierbergs, “so empty salad bars turned into creative spaces for our stores.” 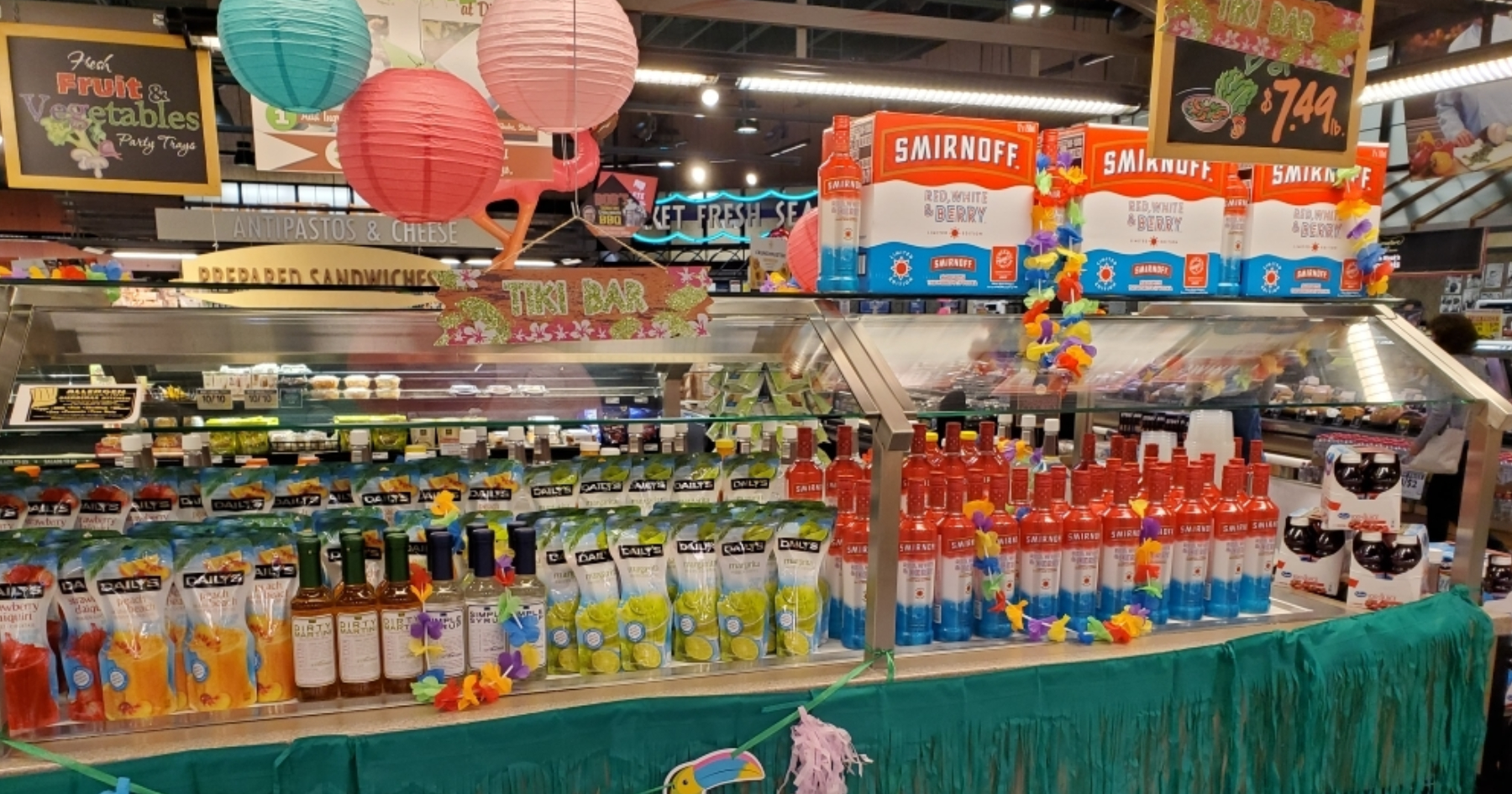 Starting with a “bar” theme, associates filled empty bins with airplane-size bottles of liquor and single beer cans. From there, the concept expanded to include a tiki bar, a candy bar, a breakfast bar and an energy bar—all using packaged goods. “Since then,” Collins says, “the space has been a hot spot for our stores to feature locally made, pre-packaged products or seasonal craft beverages.”

Stores also significantly increased their grab-and-go salad options to meet customer demand. As pandemic restrictions lift, Dierbergs is considering its options. “The future of our salad bars is definitely a point of discussion,” says Produce Director Tom Brindell. “However, we haven’t made any formal decisions about reopening.”

In early November last year, Coborn’s of St. Cloud, Minn., deployed a trio of Sally the Robot devices to fill the salad bar gap in select stores. Similar in size to a vending machine, Sally assembles and dispenses customized salads at the touch of a large-format video interface—or a mobile app. Created by Hayward, Calif.-based Chowbotics, Sally is finding a home in grocery stores nationwide.

“Having to shut down our salad bars during COVID, we wanted to leverage new technology to give guests a similar experience in a safe environment,” says Josh Croson, director of deli for Coborn’s. “Sally allowed us to do that by being a fully self-contained unit to protect the product, while allowing the use of a mobile app to minimize contact.”

Coborn’s originally had two Sally units at its Ostego, Minn., location and one at its store in Princeton, Minn., but has since moved one of the Ostego “Sallies” to a Ramsey, Minn., location.

While it has taken some time for customers to get accustomed to Sally, feedback has been largely positive. Some people have even traveled out of their way to see the salad-making robot in action. “This is something that really hasn’t existed in the market before,” Croson says, “so ensuring that people are comfortable using the machine and understanding its capabilities is huge.”

“We know people enjoy the customization options a salad bar can offer, and we are really looking to our guests to tell us when they feel comfortable with these types of options again.”

Looking ahead, Croson says, Coborn’s hasn’t yet decided if it will bring back self-serve salad bars. “It’s a bit too early to tell,” he says, “and that’s really the general consensus across the country right now. We know people enjoy the customization options a salad bar can offer, and we are really looking to our guests to tell us when they feel comfortable with these types of options again. In the meantime, Sally is a great way to deliver a similar experience to the consumer.”

After a year of increasing pre-packaged salad offerings and using former salad bar space to showcase various refrigerated and shelf-stable goods, Skogen’s Festival Foods of De Pere, Wis., is reopening salad bars in some markets to gauge customer interest. Depending on the response, the company will determine which stores will reintroduce salad bars in the coming months.

“In an effort to make our guests feel comfortable, we have implemented policies to frequently clean and sanitize components like countertops and utensils,” notes Senior Deli Director Tom Droegkamp. Stores will also offer single-use gloves and hand sanitizer.

Even so, Skogen’s isn’t ready to go all in with salad bars at its upcoming Milwaukee-area locations in West Allis and Greenfield, set to open in May and July, respectively. “We’ll be opening these locations without salad bar setups,” Droegkamp says. “Instead, we will focus the space on ready-to-eat, grab-and-go options.”

“The pandemic has prompted us to change the way we think,” says Seth Maddox, associate creative director at King Retail Solutions in Eugene, Ore. “We’re even rethinking the equipment that we’re speccing for new-build stores and big renovations. We may not be placing as many buffet or self-service cases, but rather, utilizing more tiered platforms that are set up for packaged goods.”

“They don’t necessarily want to remove salad bars, but may be looking to scale down or combine them with other functions.”

Retailers are also asking for smaller salad bar setups and hybrid designs. “They don’t necessarily want to remove salad bars, but may be looking to scale down or combine them with other functions,” says Maddox. “For instance, you might see a salad bar that’s half the size of what it used to be, and it’s combined with more packaged or premade salads and containers.”

With many customers wary of self-service options, he sees the potential for salad to become a service item—similar to sandwiches and other foods offered behind the deli counter.

“That way the employee is actually serving and packaging your salad,” Maddox says. “You still get full customization and it feels very fresh, because you actually see it go in the package rather than not knowing how long it might have been on the shelf. That’s one thing that’s definitely starting to appear.”

Conshohocken, Pa.-based Saladworks is helping to accelerate the trend by partnering with grocers to install salad kiosks. The store-within-a-store designs require only 200 square feet of space and take a single night to build into existing layouts. Once installed, customers can walk up to the counter and choose from more than 60 fresh ingredients to create personalized salads. Retailers also have the option to include a customized, Saladworks-branded Sally the Robot for a self-serve option.

The company launched 40 new Saladworks stores in 2020, with the majority placed in nontraditional locations such as grocery stores. During the past two years, Saladworks has opened kiosks in Kroger, ShopRite and The Giant Co. markets. In the coming months, it plans to expand its partnerships to include additional grocery retailers.

“COVID-19 brought safety challenges to self-serve salad bars in grocery stores all across the country, but guests feel safe with Saladworks,” says CEO Kelly Roddy. “This has led Saladworks to become a valuable player for grocery retailers looking to provide their customers a fresh meal they can pick up while doing their shopping.”

Despite such innovations, Maddox believes that self-serve salad bars will eventually return in some form—or at least that is his hope.

“Shoppers’ habits have obviously been altered by the pandemic, and we all have this heightened awareness of sanitation now, but I like to think that it will come back to some extent,” he says. “I think people like the convenience of being able to go into a store on their lunch break, fix a salad exactly the way they want it, and get out the door.”