Amazon brings its Just Walk Out technology to 1st outside grocer 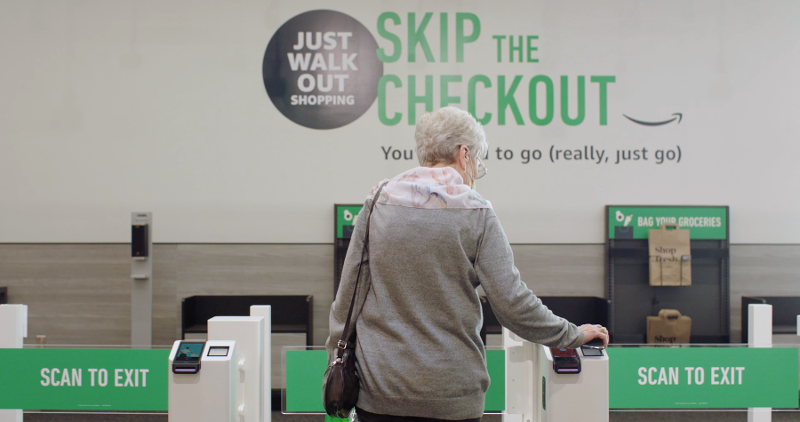 Amazon has brought Just Walk Out to its Amazon Fresh supermarkets after debuting the technology at Amazon Go c-stores. / Photo: Amazon

For the first time, Amazon is installing its Just Walk Out cashierless technology at a grocery retailer it does not own.

Plans call for independent grocer Community Groceries to reopen its store at 640 East 18th St. in Kansas City, Missouri, on Dec. 16 with Amazon’s checkout-free system, which automatically tallies items that shoppers take off shelves and processes payment when they exit, enabling them to avoid waiting in line, Amazon announced Monday.

The store opening also will mark the debut of the Amazon One palm-recognition payment system at a non-Amazon grocery store. The solution lets customers use their palm to complete their purchase at checkout.

Community Groceries said Monday that it’s adopting Just Walk Out and Amazon One as a way to enhance the customer experience and “bring something innovative to the Kansas City area.” Its store closed for the equipment installation in May, and a “closed for renovations” post on social media said “Big Things Coming Soon.”

The retailer noted that it focuses on offering healthy food options in underserved communities, and the new technologies will allow faster, more-convenient service and provide something “more memorable than a traditional trip to the grocery store.” 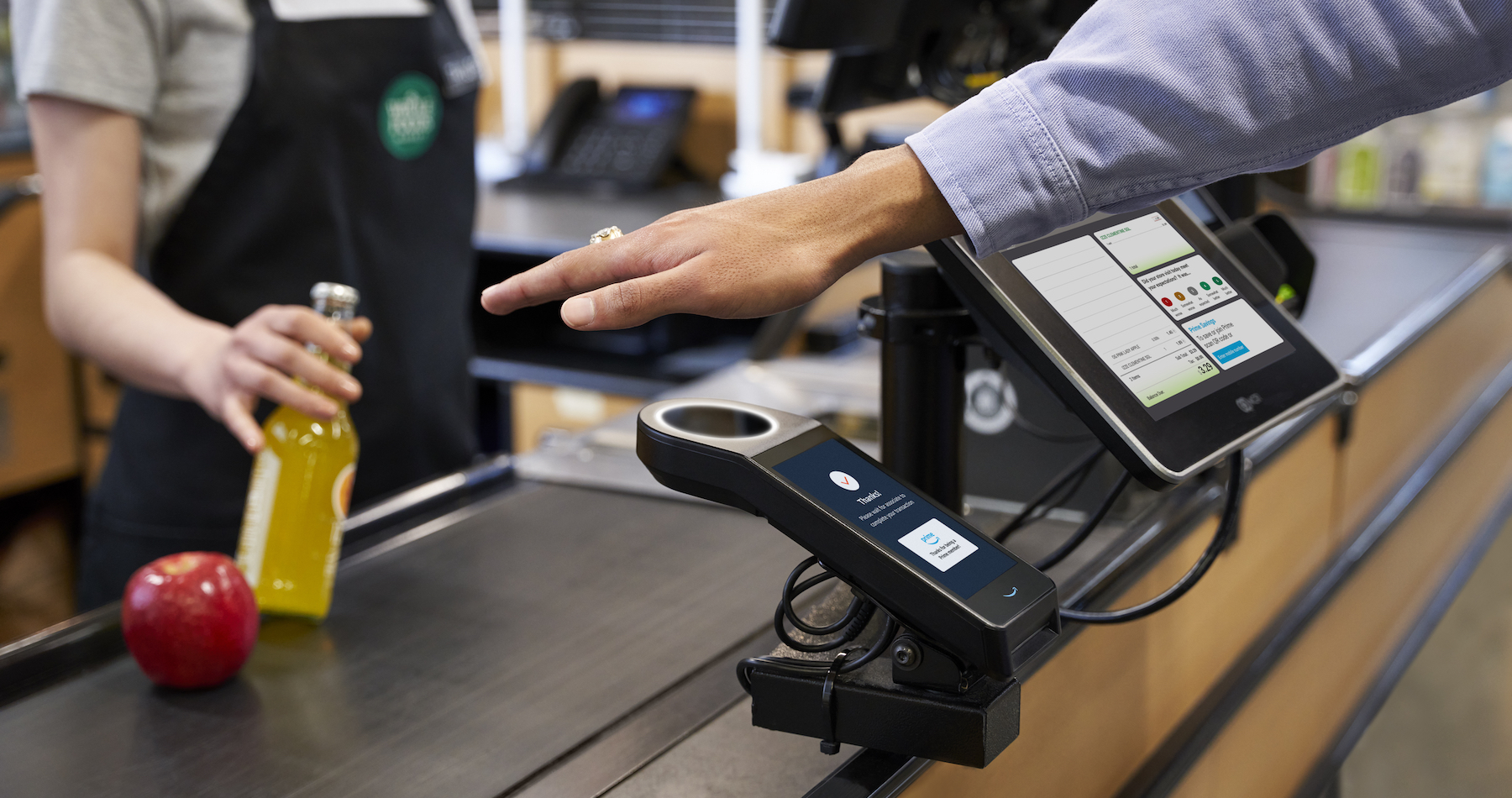 Employing palm scan ID technology, the Amazon One checkout system—also to be adopted by Community Groceries—is currently in use at Whole Foods stores and an array of other retail venues. / Photo: Amazon

“Amazon’s technologies change the way we think about shopping,” Alyssa Groenig, director of sales and marketing at Community Groceries, said in a statement. “I, like most people, have a very full schedule, and grocery shopping is a tedious task for me. This new experience will enable me and all of our guests to shop efficiently and be on our way, with no checkout lines and no hassle.”

Just Walk Out uses overhead computer-vision cameras, weight sensors and deep-learning technology to detect merchandise that shoppers take from or return to shelves and track items selected in a virtual cart. Customers using Just Walk Out enter the store by inserting a credit/debit card linked to their Amazon account at the gate or by holding their palm over the Amazon One palm signature device. When shoppers exit the store, Just Walk Out debits their Amazon account for the items they take and then sends a digital receipt to the app.

Amazon One works through the use of custom algorithms and hardware to scan a person’s unique palm signature and provide a fast, contactless way to enable daily activities like checkout and payment at a store, presentation of a loyalty card, and secure entry at sites such as a store, stadium or workplace. Customers sign up at a special kiosk or device in participating locations, and enrollment takes less than a minute, according to Amazon. After inserting their credit card, shoppers hold their palm over the device and follow the prompts to pair the card with their palm signature, which is built in real time via computer vision technology. Customers can enroll with one palm or both. After signup, customers can use Amazon One to pay at participating stores. Payment via Amazon One takes about a second or so, Amazon said.

“We are thrilled to work with Community Groceries to unlock a fast and frictionless experience for their shoppers in Kansas City, one we believe they’ll enjoy very much,” stated Dilip Kumar, vice president of AWS applications at Seattle-based Amazon. “Community Groceries is renowned for encouraging healthy lifestyles and focusing first and foremost on their local community, so we’re honored to have them as our first customer in the grocery vertical to launch a Just Walk Out technology and Amazon One-enabled store.”

The rollout of Just Walk Out to Community Groceries reflects Amazon’s expanding efforts to bring its technology and solutions prowess to the grocery and broader retail arenas. 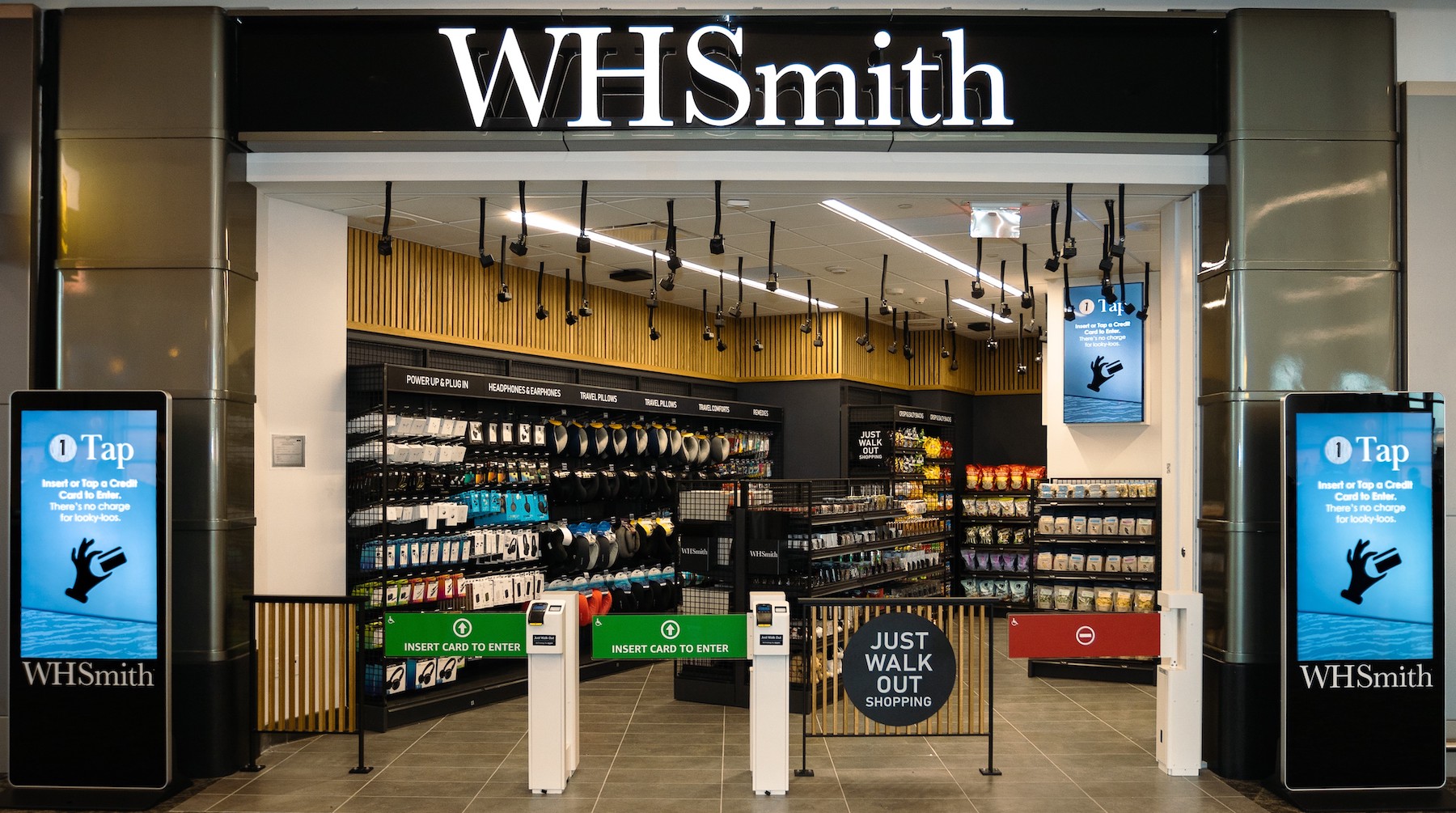 Amazon launched Just Walk Out capability at two locations of subsidiary Whole Foods Market, in the District of Columbia and Sherman Oaks, California, in February and March. The technology also has been deployed at other third-party venues such as travel retailer WHSmith in LaGuardia Airport in New York City; UBS Arena in Long Island, New York; Minute Maid Park in Houston; and T-Mobile Park in Seattle (also offering Amazon One).

Just Walk Out has been a hallmark of Amazon Go, Amazon’s first brick-and-mortar food store concept. The cashierless system made its debut with the opening of the first Amazon Go in Seattle, first for employees in 2016 and then to the public in January 2018. Next, Just Walk Out premiered at an Amazon Fresh grocery store in Bellevue, Washington, in June 2021. The technology is now in operation at 28 of the 44 Amazon Fresh stores in eight states and Washington D.C., with the rest offering the multifunction Amazon Dash Cart, which also allows users to skip the checkout line and pay via the cart.

Amazon, too, has continued to roll out Amazon One at Whole Foods and other retail sites. In early November, the e-tail giant launched the palm-scan payment solution at two Dallas-area Whole Foods stores and announced that all 16 of the banner’s Dallas-Fort Worth stores would be adding the technology in the coming weeks. Previously, Amazon One had been installed at Whole Foods locations in Seattle, Austin, New York City and Los Angeles, with the latter leading to a 65-store deployment in California unveiled in August.

And this past fall, Amazon signaled that it’s resurrecting its third-party online grocery delivery service. In late September, Ontario, California-based Cardenas Markets said it began offering two-hour delivery via Amazon at selected stores in California and Las Vegas, with plans to roll out the service to more locations next year. About a month later,  The Save Mart Cos. started offering two-hour Amazon delivery at banner stores in Lathrop and Ceres, California, as part of an expected broader rollout.

According to an Amazon spokesperson, the delivery launch at Cardenas represented Amazon’s first U.S. grocery partner delivery offering since the integration of the Prime Now program into Amazon.com in 2021. The spokesperson said Amazon has provided delivery for various third-party retailers, such as Bristol Farms, Bartell Drugs (now part of Rite Aid) and Pet Food Express, which have offered the Amazon service for more than five years. In May 2021, Amazon had announced plans to retire the seven-year-old Prime Now same-day delivery program and fold the service—including online grocery delivery and pickup—into its mainline website and mobile app.