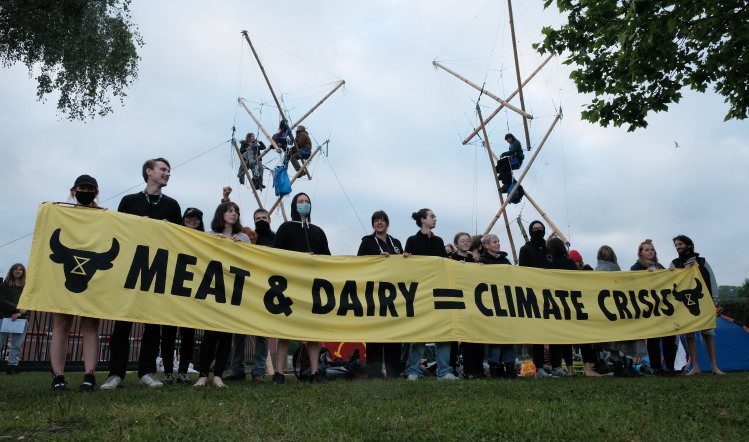 About 100 members of the group have set up a blockade around the site using tents, bamboo structures and a roof occupation in the early hours of Thursday morning (15 July) in a bid to stop the plant from distributing burgers.

Animal Rebellion said it would stay as long as it took for McDonald’s to commit to changing towards a plant-based menu by 2025, with the first step becoming 20% plant-based within one year.

Rose Patterson, a spokesman for Animal Rebellion, said: “We’re living in a time where massive change is possible, but our window to act on the climate crisis is closing quickly. ​

“The meat and dairy industries are responsible for 80-90% of Amazon deforestation, at least 18% of global emissions, and for exploiting and killing billions of animals every year. To save ourselves and the future of our children, we must start transitioning towards a plant-based food system.” ​

Officers from Humberside Police were deployed to the site to allow members of staff to go about their business and protect the rights of individuals to take part in peaceful protest.

A Poice spokesman said: “The roads in and around the industrial estate remain unaffected as the demonstration is at the entrance to one premise.​

“We are liaising with representatives from all sides to address concerns. We are committed to fulfilling our duty to protect the human rights of all the groups and individuals with an interest in this situation.”​

The protests outside OSI Scunthorpe followed similar action taken by the group at four McDonald’s distribution centres two months ago to call out the meat and dairy industries for their ‘role in the climate and ecological emergency’.

Food Manufacture has approached both McDonalds and OSI for comment.

Meanwhile, PepsiCo has set ambitious 2030 sustainable farming and climate goals​ ​to cut its environmental impact, including an aim to source all its key ingredients sustainably.