South Africa’s range of high-quality table grapes was in the spotlight in the China market this spring thanks to the active promotion work of the South African Table Grape Industry (SATI) in partnership with the Western Cape Government and leading Chinese importers and retailers. SATI on April 29 celebrated the successful 2021 South African table grape season in China through an event held with importer Joywoo and distributor Yibo at the Shanghai Huizhan Fruit and Vegetable Wholesale Market.

A highlight of the event was the participation of Mpho Hlahla, South Africa’s Consul General in Shanghai, and Mashudu Silimela, Counsellor for Agriculture at the South African Embassy in Beijing. The presence of these officials demonstrated the effective cooperation between South Africa’s industry and government to strengthen exports of the country’s world-renowned fruit products. 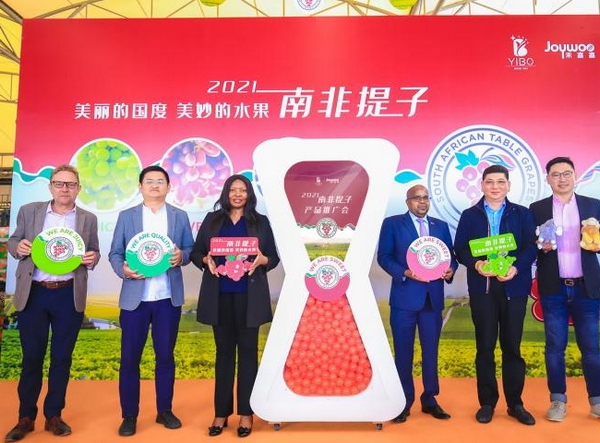 “We hold hands today as the South African Consulate-General in Shanghai, the Western Cape Department of Agriculture, the South African Table Grape Industry, as well as you, our esteemed importers, to further promote our table grapes in the Chinese market,” said Hlahla. “Today’s event should not be a one-off effort to promote South African table grapes in the local market. Let us continue to work together to expand the consumer base and grow the volumes to reflect the strong trade relations between our two countries.”

This season was the first in which SATI has actively promoted South African table grapes in the China market since the product received market access in 2014. After kicking off the season’s promotion at Guangzhou’s Jiangnonghui Fruit Wholesale Market on April 1, SATI worked together on the campaign with partners including Joywoo and two of China’s leading fresh fruit import and distribution companies, Joy Wing Mau and Goodfarmer. The promotional campaign included retail promotions and trade advertising and outreach. 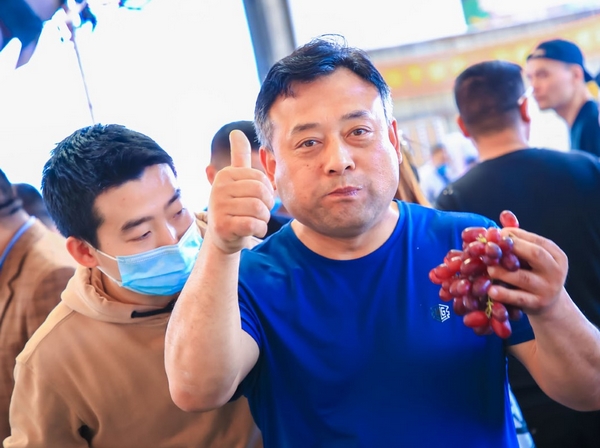 Despite challenges such as a global shipping container shortage and delays caused by increased inspections aimed at ensuring that a healthy and safe product reaches the consumer, exports of South African table grapes to mainland China in the 2021 season had nevertheless already reached a new high of 1,803,827 cartons (8,117 tons at 4.5 kg/carton) through week 14, up more than 58% over the previous season’s total exports. Through week 14, combined South African table grape exports to mainland China and Hong Kong were 2,716,239 cartons.

Historically, more than three-quarters of South Africa’s almost $1 billion worth of annual table grape exports have gone to the European Union and U.K., where they have been warmly received by consumers. Now, SATI has set the ambitious goal of increasing its exports of table grapes to China by 10 million cartons over the coming five years. As part of this effort, SATI has developed an exclusive “China Specification,” which ensures that the best possible South African table grapes are provided to this highly discerning market.

“China is an enormously important market to SATI’s strategy for future diversification and growth,” said Willem Bestbier, CEO of SATI. “And we are committed to continuing our active generic promotion campaign for South African table grapes in China over coming seasons. Indeed, we look forward to more and bigger activities in the future. Although the 2021 season may be complete, our work in the China market is never finished. We look forward to hearing from potential partners in China’s fruit industry in order that next season will be an even bigger success for South African table grapes in China.”