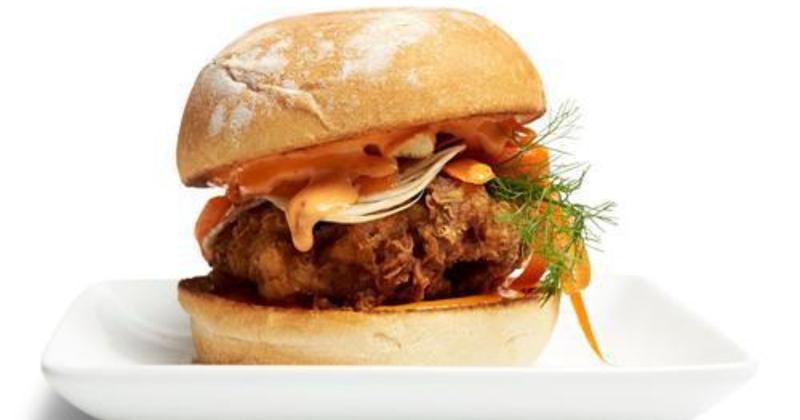 In the world of quick-service chain restaurants, the battle for “chicken sandwich dominance” began on Aug. 12, 2019, when Popeyes launched its now-famous fried chicken sandwich that sold out just weeks after its launch, largely due to a Twitter feud incited by rival Chick-fil-A in which the chain touted its sandwich as the original, notes WGB’s sister publication Restaurant Business. Scores of QSRs from Wendy’s to KFC to McDonald’s would put forth their upgraded poultry offerings in the months to follow.

But in grocery, the game of chicken is freshly afoot, and relative newcomer Choice Market—a Denver-based chain of upscale grocery-meets-c-store concepts with Amazon Go-size aspirations—is ready to battle with the best in the chicken sandwich wars.

On Denver’s eclectic Colfax Avenue, ironically in the shadow of a Popeyes, Choice Market opened its third location in August 2020. In April 2021, it opened its fourth and flagship location in the Mile High City—Choice Market Bannock—a 5,000-square-foot store that founder and CEO Mike Fogarty says is “reinventing convenience” through its mobile app, online ordering, contactless checkout and delivery in 45 minutes or less—either from Choice’s in-house team that use a fleet of electric bikes and cars or third-party service providers such as Uber Eats.

The new store features Choice: Now, Aifi-powered camera-vision technology that allows shoppers to use the Choice mobile app upon entry to pick up their groceries and freshly prepared meals made in Choice Market’s scratch kitchen—including a variety of chicken sandwiches, from the Korean Crispy Chicken Sandwich to the ever-popular fried Classic Chicken Sandwich—and then leave the market without a traditional checkout. But as “choice” defines this growing chain, says Fogarty, shoppers can also pay by traditional methods.

When Choice Market looked to strategically develop its menu to include chicken sandwiches that would speak directly to Denverites, it didn’t simply guess at what might appeal. It launched a temporary ghost kitchen, dubbed “The Chicken Kitchen,” to test consumer response to some 10 different chicken sandwiches.

The ghost kitchen revealed that while the now menued Korean Crispy Chicken Sandwich featuring free-range chicken, fennel-carrot slaw, Sriracha mayo and Korean barbecue sauce on a potato bun was deliciously flavorful to many, the Classic Chicken Sandwich made with free-range chicken, pickles, mayo, Gotham Greens bibb lettuce on a Harvest Moon potato bun was destined to be No. 1.

“Customer preferences evolve. The burger used to be No. 1, and now it seems the fried chicken sandwich is No. 1 in America, with many fast casual and QSRs introducing chicken sandwiches.”

Choice Market also taste-tested the competition. “Coincidentally, Popeyes is next door to Choice Market’s Colfax location. Right when we opened, we kept an eye out and tested some of their products,” admits Fogarty. “This is life. Customer preferences evolve. The burger used to be No. 1, and now it seems the fried chicken sandwich is No. 1 in America, with many fast casual and QSRs introducing chicken sandwiches.” As for to the so called “chicken sandwich wars,” Fogarty says, “This is just what’s happening now, but tastes will probably go back to burgers at some point.”

And while Fogarty admits that Choice’s fried chicken sandwich isn’t the healthiest item on its scratch-made menu focused on organic produce, cage-free eggs and hormone-free proteins, “it’s made from antibiotic-free chicken breasts that have been brined for 24 hours.” The Classic is also topped with New York-based, but locally grown, Gotham Greens’ hydroponically farmed organic lettuce and sandwiched between a local artisan bun from Harvest Moon.

Fogarty not only gets the importance of featuring “local” in-store and on the prepared foods menu at Choice Market, he also understands how doing so establishes a culture and supports community.

Growing up in Pennsylvania, he was well-acquainted with Wawa, Pa.-based c-store chain Wawa and its trademark hoagies, otherwise known as subs to everyone not from the Philadelphia area. In past conversations with WGB, Fogarty has said his childhood Wawa memories were in part the impetus for Choice Market, though the concepts are vastly different. Still, Choice Market’s Daring Banh Mi sandwich is listed on its menu as sesame soy marinated vegan chicken, cucumber, pickled carrots, fresh jalapeno, cilantro and vegan Sriracha aioli on a “hoagie roll.”

Social Media on the Menu

While Choice Market says its “sticking to its commitment to offer local, high-quality fresh food,” including all organic produce, Fogarty says if all of this information were on the menu board, there wouldn’t be room to list the food. Instead, Choice relies on additional in-store signage, more robust descriptions online, and social media to communicate its food philosophy.

If social media can spark the chicken sandwich wars nationwide, it can certainly drive shoppers to a particular store for their favorite dishes and more. Choice Market has had success promoting its prepared foods across a variety of social platforms.

Fogarty’s pro tip: Pay for hi-res, quality images of the food. “Anytime we show high-quality pictures of our food, we see a lift on engagement,” he says. “We use hi-res images of our menu items in-store, online and for Uber Eats. It’s the same clean visual across all platforms and that way people know exactly what they’re getting.”