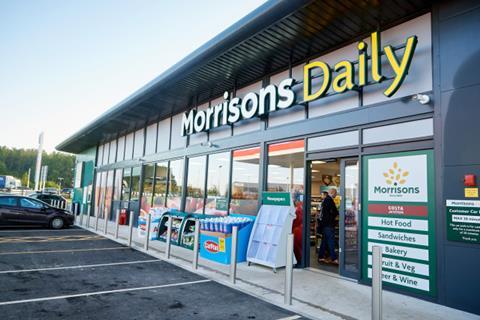 McColl’s has issued a profits warning after slower than expected Easter trading, while it remains locked in talks with its lenders and Morrisons over a financing package to enable its ongoing trading.

The convenience group said it has experienced “mixed” trading since its previous update on 28 February.

It said the recovery in trading performance had continued during the first half of March, but the business saw “softer” trading through the Easter period, impacted by reduced consumer spending and continued supply chain disruption across the industry.

It said this had resulted in product availability issues, which it is working closely with its wholesale supplier to mitigate.

Despite this, the group’s Morrisons Daily stores continue to perform “strongly”, with like-for-like sales growth that is at least 20% better than non-converted, comparable stores, and ahead of the total convenience market.

All Morrisons Daily conversions in 2022 have benefited from the introduction of a Morrisons food-to-go proposition, while its conversion programme continues with 69 store opening so far in its financial year.

“The move to convert stores to the Morrisons Daily format is fundamentally reshaping the business into a more profitable and sustainable model in the medium term,” it said.

However, the weaker than expected Easter performance and the widely reported impact of cost inflation pressures, means it now expects adjusted EBITDA for the current financial year to be no higher than the level achieved in 2021 of 20m.

It said it continues to review costs across all parts of the business in order to help mitigate the challenging trading conditions, as well as being even more targeted in its capital deployment.

Meanwhile, it said a potential financing solution is under active discussion with its “key commercial partner and lenders” which would “resolve the short term funding issues and create a stable platform for the business going forward”.

It notes that, even if such a successful outcome is achieved, it is increasingly likely to result in little or no value being attributed to the group’s shares.

McColl’s shares have lost almost 50% of their value this moring, falling back to 2p.

English wine producer Chapel Down bounced back into profit last year amid strong growth of its core business after the divestment of Curious Beer.

On a continuing operations basis, the group posted a 25% increase in turnover to £16.6m on wine sales volumes up 17% with sparkling volumes up 39%.

Group revenues increased by 9% to £16.9m as the contribution of its disposed of beer and cider arm Curious Drinks dropped 87% to £0.29m.

Total adjusted EBITDA was £1.93m, following a loss of £0.2m last year, while profit before tax for the group was £0.79m compared with a £7.9m loss, which was driven by a £6.7m exceptional cost related to the Curious Drinks disposal.

On a continuing operations basis, adjusted EBITDA increased 31% to £2.1m and gross profits were up 37% to £7m.

Following its successful fundraising in June 2021 which raised £6.88m, and the securing of a new £15m asset based lending facility, the group plans to continue to invest in it winery operations, its team and the Chapel Down brand.

CEO Andrew Carter commented: “Following the sale of the beer business, Chapel Down is completely focused on being the number one winemaker in the UK. Our Wine and Spirits business enjoyed record revenues and sold over 1.5m bottles – our largest number ever. This excellent performance results from our brand leadership position in an exciting and growing market; English Wine is thriving, and the market continues to grow at a rapid pace.

“I am very proud of the progress we are making and was delighted with the external recognition of our position as England’s leading wine producer, with multiple medals at The Decanter World Wine 2021 Awards and WineGB Awards for both still and sparkling wines.

“With an experienced, dynamic and ambitious team in place, we are well positioned for our future growth plans to double the size of our business over the next five years.”

On the markets this morning, the FTSE 100 has slumped 2.1% to 7,360.8pts amid concerns over a possible Covid lockdown in China.

This week in the City

With quarterly earnings season in full swing, it’s a busy week for company updates at home and internationally.

From a grocery perspective, the major news is Sainsbury’s full year results on Thursday – which will also see Q1 results from Unilever.

WH Smith posts its half year results on Wednesday along with first quarter sales from Nichols.

Reckitt Benckiser is scheduled to post its Q1 sales trading update on Friday.