When a European airline sought new ways to reuse decommissioned aircraft, iFarm engineers got to work designing a custom vertical farm that could flourish in the body of an airplane.

Experts from iFarm proposed converting the passenger airliner cabin into a salad bar and designed a vertical farm with a total growing area of 135 m² in the aft section of the aircraft so that the bar can offer up to 14 kg of fresh salad daily.

Fresh meals on board
“Vertical farms are good because they can be installed in a wide variety of spaces, from abandoned subway stations to airplanes that no longer serve their intended purpose. We will be happy to cooperate with companies that think outside the box and consider such high-tech repurposing options. This project does not yet have a deadline, but it has already drawn the attention of specialized design bureaus as an easily scalable example of old aircraft upcycling.” commented Kirill Zelensky, CEO of iFarm Europe.

For the airline, this project would serve as a demonstration of its forward-thinking approach and the increased focus on customer service, including the provision of fresh and healthy meals on board. 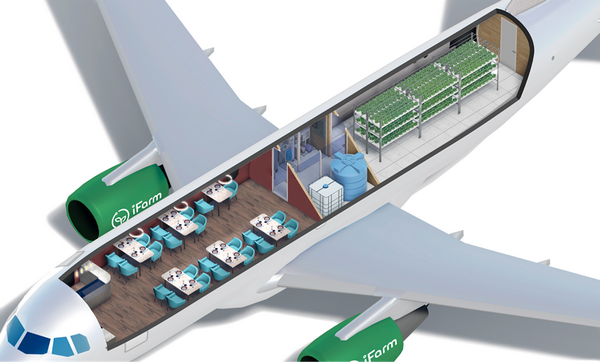 The partition between the cafe and the farm can be made transparent, and the equipment zone moved to the tail end of the plane. For iFarm, the project demonstrates another innovative way of integrating agrotechnology into seemingly unsuitable infrastructure and the versatility of vertical farming.

Repurposing materials
For iFarm, the project demonstrates another innovative way of integrating agrotechnology into seemingly unsuitable infrastructure and the versatility of vertical farming. While contemplating additional ways of using the wide-body aircraft to grow plants, engineers suggested a number of configurations that make such refitting not only useful for advertising purposes but also commercially viable. For example, a farm located in the body of a decommissioned cargo jumbo jet can produce up to 1.5 tons of greens per month.

Not all obsolete and overage aircraft are recycled. The airline industry has long used conservation methods to repurpose aircraft, such as, sending airliners to spare airfields in dry climates, where they essentially serve as containers of spare parts. Each aircraft includes about 350,000 individual components, and many of these crafts remain useful long after their last flight.

But some owners prefer upcycling to disposal in an attempt to provide “second life” to old aircraft, especially the ones notable for some reason (e.g., the first airplane of the airline). There are existing examples of creative airliner usage, including dozens of on-board cottages, offices, cafes, and hotels all over the world, and even an old soviet Yak in Georgia that hosts a kindergarten.

For airline companies, the opportunity to upcycle planes into highly sustainable vertical farms is an enticing one. When an industry known for its high carbon footprint can find new ways to support sustainable practices, it could offset emissions, enhance a brand’s image and have a genuine impact on the environment.