“In this 2020-21 season, sales of Ambrosia™ apples were very dynamic both in Spain and Italy right from the beginning,” remembers Marco Rivoira of the homonymous Piedmontese group. “Such an early end of season has, however, nevertheless come as a surprise. We initially planned to guarantee supplies throughout the month of April, but due to the higher demand on the main markets at the beginning of 2021 we decided in agreement with our clients not to curb the demand, but to end the season earlier.”

“Germany has also been a very positive surprise,” continues Fabio Zanesco, sales manager of VIP, “as the constant demand by clients and consumers was better than expected. We knew that we would do well, but such a stable demand confirms again that Ambrosia™ is a variety affirmed on solid foundations. In Scandinavia, we expanded the distribution and there’s no doubt we could have done even more, but our main objective was meeting our commitments on the different markets.” 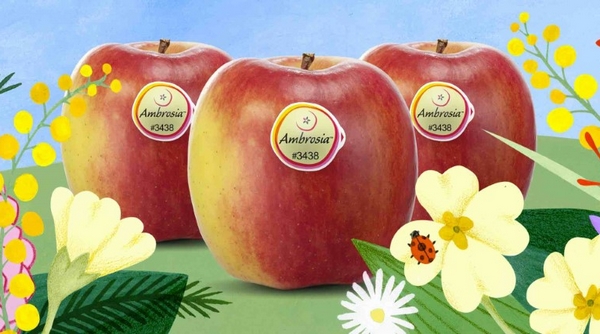 For the sake of completeness, we also have to mention the reduced campaign in Asia because of problems due to the pandemic, logistics and a market that has only shortly been receptive. “We nevertheless regard Southeast Asia as a very interesting market for Ambrosia™’s taste profile,” affirms Rivoira. “This is why we have to work hard to relaunch the marketing strategy in the next season in line with the volumes that will be available in the requested quality. This spring is climatically very difficult in all production areas. So we will have to figure out the best way in the next months.”

As far as marketing and positioning are concerned, Ambrosia™ undoubtedly found further interesting areas of development in Europe during the last season. In this context, we registered a quantum leap in both communication and direct distribution. 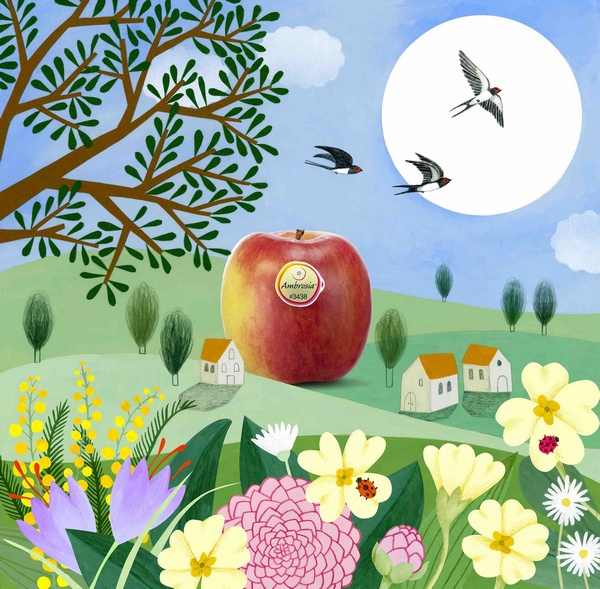 At the beginning of the season, we worked on the restyling of the brand together with the Robilant agency, which we were immediately on good terms with. The result is a modernized brand.

The 2020-2021 biennium was a special season for Ambrosia™: The Sweetest Season. The Instagram wall of @melambrosia filled with unpublished recipes and original artwork during the last six months underlining the strong value of seasonality related to the sweet apple that everybody loves. 12 food and illustration talents from Italy and abroad contributed to reinforce the positive perception of Ambrosia™ with a very colorful series of grid posts confirming and surpassing the results of the last digital campaign: more than 2,700,000 single users and more than 16 million impressions between October 2020 and March 2021.

In Spain, we started the first TV campaign over three periods of time (November, January, March), which found extraordinary resonance with the consumers.

The campaign’s reach far exceeded all expectations and Ambrosia™ was able to position itself as a quality brand among Spanish consumers.