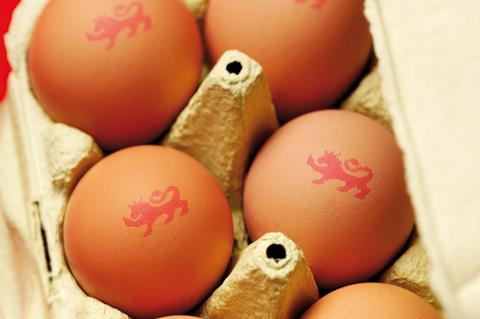 Shoppers facing growing egg shortages in the mults are also seeing hefty price rises, with Assosia data showing hikes of as much as 20% on some lines over the past fortnight alone.

With Tesco, Morrisons and M&S becoming the latest retailers to introduce egg rationing this week, analysis of Assosia data by The Grocer shows there were 37 separate price increases across the the traditional big four, Waitrose, Lidl and Aldi since 12 November.

Of the big four, Morrisons, Sainsbury’s and Tesco all saw numerous price rises, though Asda saw none during this period.

Meanwhile, a Tesco Finest Free Range Chestnut Maran Egg six-pack is now 15% more expensive than it was two weeks ago, rising from £2 to £2.30. This was the same level of percentage increase seen in Waitrose’s Essential Free Range White Egg six-pack, which rose from £1 to £1.15.

When asked about the price rise, a Waitrose spokeswoman said the retailer’s farmers had “suffered through 18 months of extreme market volatility and we’ve continued to pay them a fair price throughout”.

While that had meant “a marginal increase in price”, the retailer continued “to offer great value to our customers, while importantly ensuring there are British, free-range eggs available on our shelves”, she added.

A further 19 lines across the major supermarket chains have seen hikes of between 5% and 15% over the past two weeks, the Assosia data shows.

It comes as Waitrose today announced more support for its producers with a £2.6m aid package going directly to its UK egg farmers.

“Without our farmers, we can’t function as a business,” said James Bailey, executive director at Waitrose. “We’ve cultivated long-standing relationships with our suppliers, and paying our farmers fairly and offering our customers free-range British eggs are commitments that we simply won’t sacrifice, even when the going gets tough.”

Elsewhere, Noble Foods, owner of The Happy Egg Co, has also announced additional support for farmers, with its second price increase for egg producers in the space of eight weeks. Free-range egg producers across all grades will recieve an increase of 9p per dozen from 1 December.

“The concerns around cost pressure and risk management require the entire supply chain to work together, find the solutions to these underlying problems, and ultimately ensure availability returns to normal,” said Graham Atkinson, agriculture director at Noble Foods.

The Grocer has approached Morrisons, Sainsbury’s and Tesco for comment.