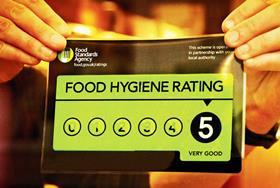 Aldi has a new string to its bow, after being named the most hygienic of 10 major grocers, based on Food Standards Agency ratings of stores.

Let’s put that in context: a discounter, with its tight margins, requiring super-efficient store operations, more consistently achieving a maximum five-star hygiene rating than any of the big four, not to mention the likes of M&S and Waitrose.

But there’s another context to the analysis published on Monday by Property Inspect: all the supermarkets are doing well. Co-op, at the bottom of the table, was credited with a five-star rating for 88.6% of its stores. It’s a figure many consumers may find reassuring, even if it’s several percentage points off Aldi’s near perfect 99.7%.

“Most supermarkets do well,” says Paul Hiscoe, MD of Scores on the Doors, which publishes ratings of outlets across the country. “They have national standards and regular independent audit checks.”

It might have been more interesting for consumers if the analysis had focused on some other types of outlets.

All are areas in which lockdowns, especially last year, have provided a tailwind for sales. According to Lumina Intelligence, the foodservice delivery market grew 48% to £11.4bn in 2020.

At the same time, a huge backlog in local authority inspections began building in lockdown last spring, leading to 60,000 being overdue by July. According to Hiscoe, 58% of ratings are now out of date as a result.

Then there is the upheaval in the industry itself, with the rise of businesses delivering from homes, or changing an existing model.

“Since the pandemic, every man and his dog has been offering takeaway,” says Hiscoe. “There are a lot of business that have changed their use, added takeaway and delivery, and haven’t been inspected since the start of the pandemic.

“It’s all fallen apart a bit.”

Even where a business’s food hygiene rating is up to date, consumers in England may have no idea what it is, because there remains no requirement for it to be displayed.

The FSA has been seeking to establish the requirement in England for years, which would bring it into line with Wales and Northern Ireland, which the agency also covers. “We remain fully committed to mandatory display of hygiene ratings at food business premises and when ordering food online in England, which will give consumers more informed choice about where to eat or buy food,” says an FSA spokesman.

Consumers overwhelmingly want it too, according to Hiscoe. “Consumers have been asking for compulsory display in England for 10 years now. It’s the biggest thing we get asked for. FSA’s own data shows 87% want it.”

Yet any such move remains at least five years away, thanks to the parliamentary process and consultation that would be necessary, along with the likely phased introduction, Hiscoe says.

Meanwhile, as a result of the pandemic “obviously the public has a very heightened awareness of the need for good hygiene standards”, he adds.

There may be much to worry about when it comes to food hygiene ratings, but supermarkets need not be the focus.