“For the first time, our entire stone fruit range is zero waste” The first greenhouse stone fruits produced in Huelva have been available on the market since the end of March. “On March 30, we started the harvesting of the first nectarines, both white and yellow-fleshed,” says Victoria Martín, head of marketing for the Huelva-based company Plus Berries. “This weekend, we will start harvesting the white-fleshed peaches and after next week we will have 4 different products available, including the red peaches.” 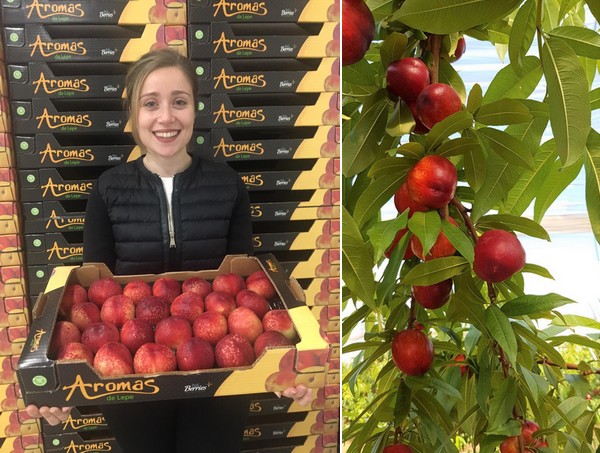 The cold spells recorded in the Peninsula during the winter, and which decisively marked the development of the campaign for other products (such as strawberries, whose production was slowed down by the low temperatures) has, however, been beneficial for these fruits, which grow sheltered from bad weather under plastic.

“This year we have had about 300 hours of cold in Huelva; an amount which isn’t normal for the province, and which has allowed the trees to have a good winter rest. This has resulted in a very good flowering and high yields,” says Victoria. “This translates into good quality fruit, with high Brix levels and also a good color in general.” The exception is apricots, which have been affected by problems in the pollination phase in many Spanish producing areas.

Low temperatures have not had an equally positive impact in all the Spanish stone fruit production areas. The frosts at the end of March have taken a toll on more than 12,500 hectares of stone fruit trees, according to Agroseguro data. Worthy of note is the damage registered in producing regions as important as Lleida, Huesca or Badajoz, and Plus Berries also has farms in production in the latter. “Due to the problems with the pollination and frosts, Badajoz’s plum production is down by around 50%,” says Victoria.

Plus Berries has 250 hectares of early stone fruit trees in Huelva in which it plans to produce about 3,500,000 kilos, including all products in the range (nectarines, peaches, Paraguayo peaches, apricots and plums). “We continue in Badajoz with the mid-late season campaign, with the prospect of reaching about 15,000,000 kilos. This allows us to serve our clients from early April to November.”

“We export our fruit to supermarket chains and wholesalers across Europe, and from next week we will also start with air shipments to Hong Kong,” she says. “Let’s hope that the cold of the last few days will be an isolated episode and that we’ll have spring weather in Europe in the next few weeks that will help encourage consumption,” says Victoria.

“Adhering to our sustainability policy, we have chosen to implement this strategy in order to offer the consumer not only an early product, but also with zero pesticide residues.”