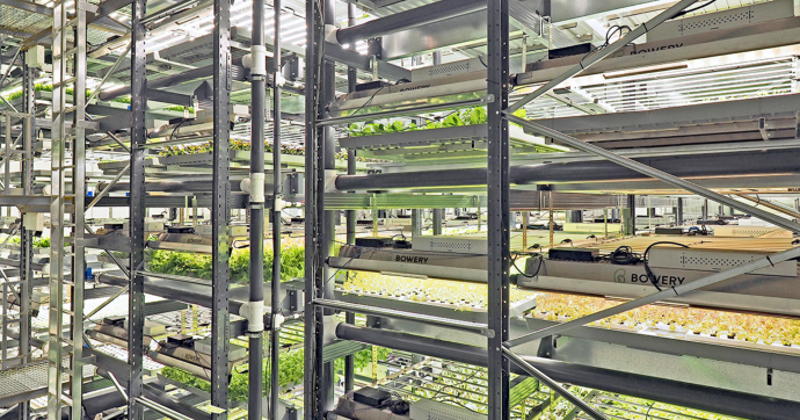 Bowery Farming, whose indoors-grown greens are sold in more than 850 stores in the Northeast and Mid-Atlantic, announced it has secured $300 million in a Series C funding round.

The latest funding round brings Bowery’s total investment haul to more than $472 million. Fidelity Management & Research, which led the Series C round, has valued the New York-based company at $2.3 billion.

In a news release, Bowery stated that its sales at brick-and-mortar retailers are up 750% since January 2020, aided by a distribution deal announced in March to provide the company’s “Protected Produce” to 275 Albertsons-owned Safeway and Acme stores on the East Coast. Bowery also has retail partnerships with Amazon Fresh, Giant Food, Walmart, Weis, Whole Foods Market and specialty grocers. The company operates two large-scale commercial farms in Kearny, N.J., and White March, Md., as well as Farm X, a research and development hub in Kearny.

Bowery, along with the growing number of other players in the vertical-farming space, including AeroFarms, Fifth Season, Kalera and Plenty, is seizing on a growing appetite for greens that can be grown locally year-round.

Positioned as a more sustainable and efficient alternative to outdoor farming, with greens grown in controlled indoor environments to reduce water and pesticide use (and the need for human labor), indoor farms have drawn a variety of big-name backers: Bowery’s investors include GV (formerly Google Ventures), celebrity chefs Jose Andres and Tom Colicchio, and celebrities Natalie Portman and Justin Timberlake. NHL Hall of Famer and Pittsburgh Penguins co-owner Mario Lemieux is a partner in Pittsburgh-based Fifth Season. Former USDA head Sonny Perdue is an investor and new board member at Orlando-based Kalera.

“We’re reinventing a new supply chain that’s simpler, safer, more sustainable and ultimately provides vibrantly flavorful produce unlike what’s available today,” Bowery founder and CEO Irving Fain said in the company’s Series C news release. The latest funding round, he said, will fuel development of the company’s proprietary technology as well as its continued physical expansion: Bowery is working to convert an industrial site in Bethlehem, Pa., into the company’s largest and most technologically advanced farm so far and is eyeing additional opportunities in the U.S. and abroad.