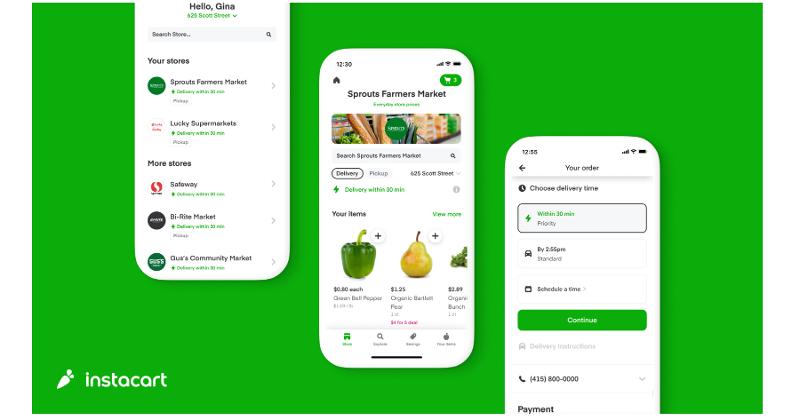 The San Francisco-based grocery delivery app said it was introducing availability of what it called “Priority Delivery” providing consumers with delivery of certain grocery orders in as little as 30 minutes.

The offering, which is debuting May 27 through 300 stores in 15 cities, including Chicago, Los Angeles, Miami, San Diego, San Francisco and Seattle, comes amid an invasion of any number of convenience-focused micro-grocers such as GoPuff, Fridge No More and Gorillas offering delivery in as little as 10 minutes in some markets.

While those services are in effect hyperlocal “dark-store” retailers, the Instacart offering differs in that its Priority Delivery sales are made through its partnering retail stores—Ralphs, Safeway, Sprouts Farmers Market and Stater Bros. are named among participants in the initial launch. Instacart said it intended to expand availability of Priority Delivery to additional markets and retailers in coming months.

Consumers using the Instacart app can now see availability of faster deliveries—as well as increased availability of 45- and 60-minute deliveries in other markets also newly launched this week—before they shop, indicated by a green lightning bolt icon alongside available stores. That feature could help certain retailers gain share in Instacart’s marketplace, which now includes hundreds of retail brands.

“We know that no two grocery shops are created equal—whether it’s a bulk buy for the week ahead or just a few ingredients for tonight’s dinner—so we’re launching new features that support the many ways people shop for their groceries today,” said Daniel Danker, the newly named VP of product for Instacart, in a statement. “For many customers, every minute counts when they’re in a pinch and need something in a hurry. With today’s launch of Priority Delivery, we’re redefining the ‘quick run to the store’ and bringing the grocery express lane online for customers.”

Availability for 30-minute delivery in launch markets will vary on a given day and is based on a number of factors, including the customer’s proximity to the store, basket size and available shoppers, Instacart said. The offering would typically be limited to small baskets not unlike a retail store’s “10 items or less” express checkout guidelines: If a 30-minute delivery is no longer possible as the customer builds their basket, a new delivery window will be shown to the customer during their online shop, Instacart said.

Priority Delivery would accompany a “nominal” and dynamic incremental fee, based on market conditions such as driver availability, the company added.

The speed of the offering would appear to reflect Instacart’s moves in recent months to withdraw crowdsourced shoppers from retail stores, and instead use its partnering retailer’s employees to pick orders. As with most orders through Instacart, Priority Delivery would be executed through its crowdsourced drivers.

Consumer demand for “small basket” shops has increased along with the broad move toward e-commerce as a shopping option, Instacart noted. The coronavirus crisis last year sparked deeper penetration of online shopping as a percentage of consumers’ overall grocery spend.

Consumer expectations of fulfillment speed are also rising exponentially, as technology companies such as Instacart and Amazon have rendered online grocery—once a next-day proposition—to a standard of two hours, and a new breed of instant-delivery convenience stores like GoPuff attract heavy investment and rapidly expand. Convenience stores like 7-Eleven and non-grocery retailers that tend to generate smaller baskets in the meantime have joined Instacart’s platform.

While Instacart shoppers can request grocery delivery up to two weeks in advance, about 85% of its customers opt for delivery in two hours or less, the company said. Last year, 95% of Instacart’s orders were placed for delivery in under two hours, and 50% of those were delivered in less than one hour.