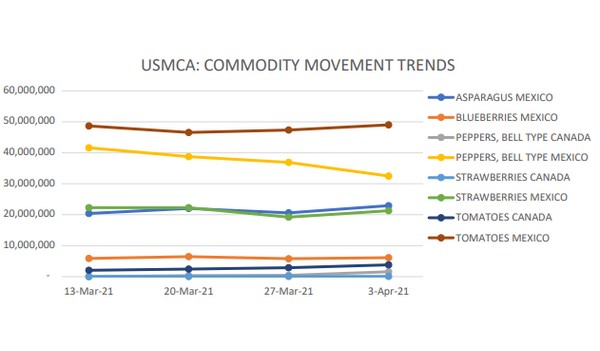 The USDA has issued its weekly report, providing trend analysis of the volume and prices of Seasonal Perishable commodities. Volume represents current week and prices represent open (spot) market sales by first handlers on product of generally good quality and condition unless otherwise stated and may include promotional allowances or other incentives. The charts provide graphic representation of the volume and prices of the major commodities this week based on seasonal volume.

Transportation issues seem to be easing somewhat for both domestic grower-shippers and importers, with trucks slightly more available now that Easter is past and diesel fuel prices are trending downwards. Vessel delays into major US ports continue, but reported wait times are much shorter than they have been in the past few months as some of the worst of the congestion has cleared up. Trucks and truck drivers remain in tight supply, impacting prices in some locations. Many in the produce industry are hopeful that the increasing availability of vaccines will help business recover back to more normal levels as in-person dining and other foodservice venues are able to reopen at their regular capacities over the coming months.

Mexican asparagus crossing through Calexico, California and San Luis, Arizona movement is again expected to decrease slightly. Trading was fairly slow on conventional and moderate on organic with prices generally unchanged on both. Most shipments are still being booked at previously committed prices. Price reporting on asparagus out of Peru is expected to begin within the next week or two as more shippers increase imports throughout the month of April.

Movement out of the central district of California is expected to increase, with trading fairly active on light supplies. Most shipments are currently being booked at previously committed prices. The Walla Walla district and lower Yakima Valley, Washington asparagus harvest is expected to begin the week of April 11 for local markets, with price reporting expected later in the month as additional growers begin harvest.

Movement of blueberries from Mexico crossing through Arizona, California and Texas is expected to increase. Trading was active at higher prices though quality remains variable. Movement out of central and north Florida is expected to continue to increase as harvesting increases. Trading was active with prices generally unchanged. Quality is generally very good. Movement of blueberries out of the south and central district of California is expected to continue seasonal increase, with current supplies insufficient to establish a market. Price reporting is expected to begin the week of April 25th. Quality is reported as variable.