Mexico exported more strawberries than any other country in 2020, dislodging Spain from the number 1 position. Strawberry exports raised over US $851 million last year, an increase of 12.4% on 2019. Although Spain had held top spot for more than two decades, but saw only $646 million in international sales in 2020. The United States was in third place with $477 million.

The Mexican strawberry industry is dependent on U.S. demand: of all its strawberry exports last year, 99.3% went to the United States, which is the world’s biggest importer. Spain largely exports to other European countries. 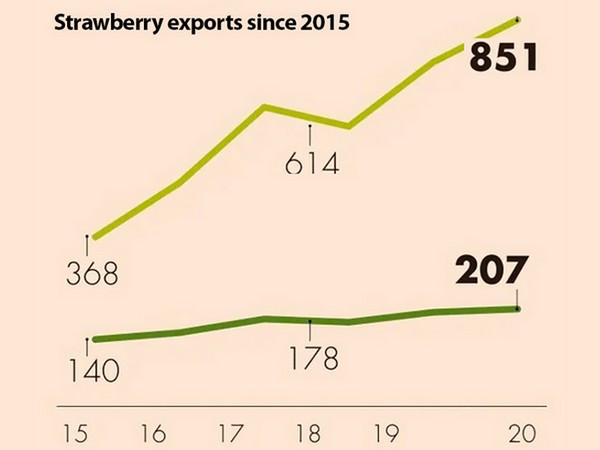 Strawberry exports in millions of US dollars are indicated in light green; in dark green volumes in thousands of tonnes / Image: El Economista

The Mexican market overcame obstacles caused by the ,pandemic such as the availability of manpower and the near disappearance of the food service industry, to which 15% of the fruit is normally sold. Demand remained robust amid producer fears that wider unemployment would make strawberries less attainable for consumers, because they are considered an impulse buy.

According to an article on mexiconewsdaily.com, Mexico’s strawberry market eclipsed the Belgian market in 2012, the Dutch in 2016, and the U.S. market in 2019.