Mixed Messages in a Recovering Economy 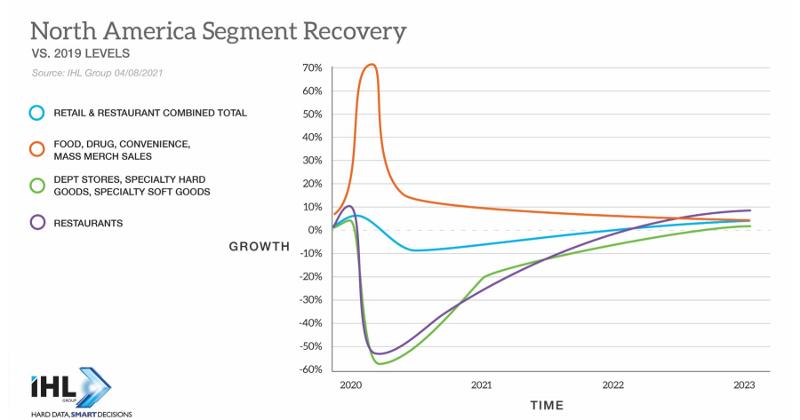 The mix of U.S. consumer spending by segment is on its way back to pre-pandemic levels. Slides courtesy Jerry Sheldon/IHL Group

Led by wealthier shoppers going hard after categories like dining, travel and hospitality that were compromised or shut down a year ago, the U.S. consumer economy is roaring back to life and will soon resemble—in most ways, anyway—the healthy economy abandoned when the coronavirus pandemic struck last March.

That is good news that most segments of retail have already begun to experience but a mixed message for “essential” retailers like food, drug and mass stores. Those retailers are expected to give back an estimated $125 billion in spending they absorbed from their wounded discretionary counterparts over the last year. Nearly all levels of shoppers say they will cut back on food-at-home budgets, and even the lowest income groups are expecting to devote a greater percentage of their budgets to hospitality this year.

Those were among the findings presented in a webinar May 26 by Jerry Sheldon, an analyst with IHL Group, a research and advisory firm for the retail and hospitality industries. His presentation came as part of a series of events hosted by microfulfillment company Fabric. The IHL data was based on an Affinity analysis of spending changes since February 2020 and on a projection based on proprietary consumer surveys. 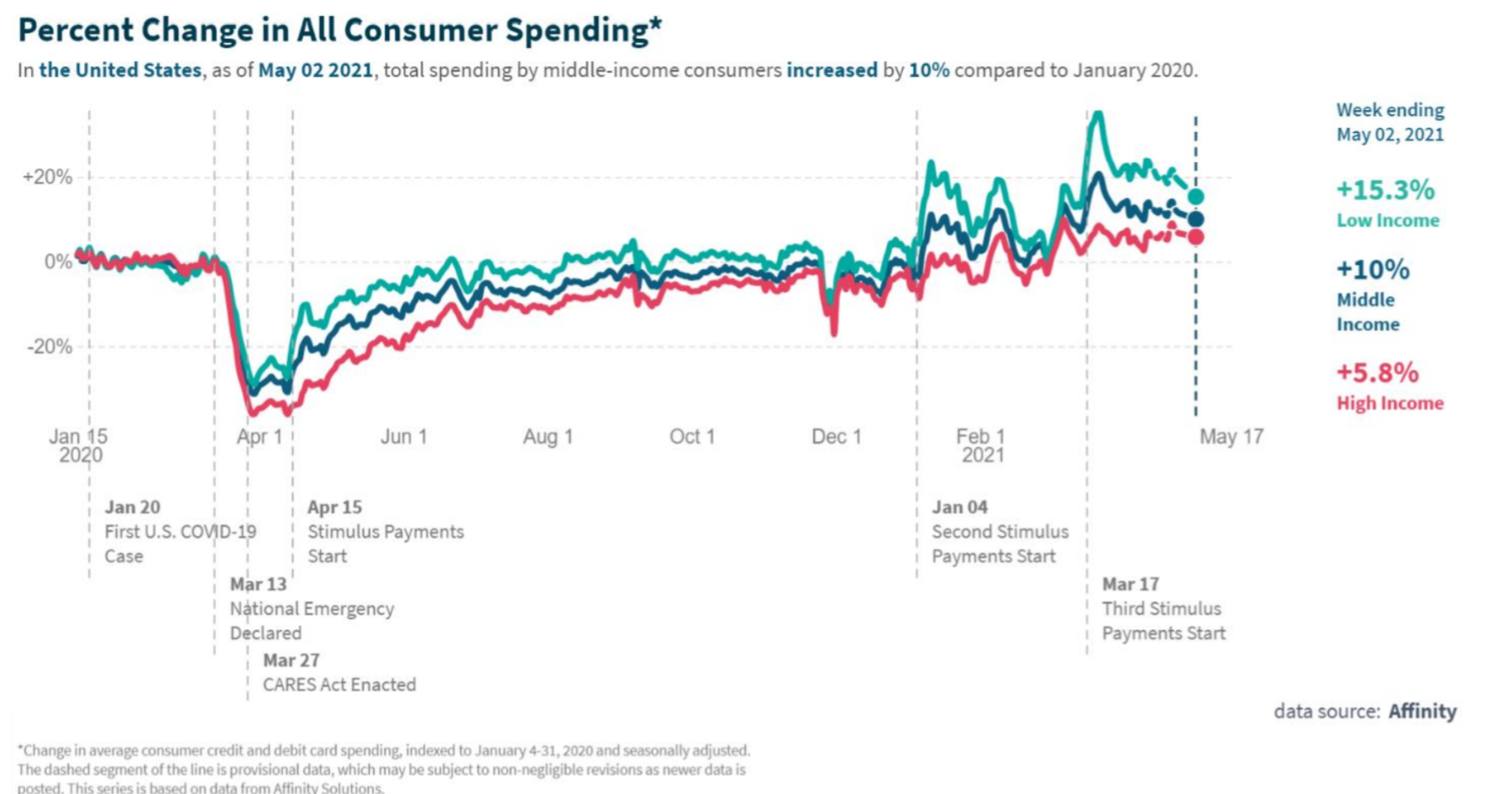 The rapid spending pattern changes over the COVID period was accompanied by indigestion in the supply chain and complicated by a widespread shift in shopping modalities—specifically an explosion in virtual shopping—that is likely to remain a larger component of retail in all categories as shopping patterns normalize again, Sheldon said. And the road back to a previous distribution of spending could also be a rocky one as a labor shortage, inflation and continued supply chain issues like port delays and scarcity of computer chips slow the technology investments some retailers will want to make to adjust to the changes in the way consumers shop.

Sheldon’s presentation showed the abruptness with which the COVID shutdowns sparked spending shifts, and how economic stimulus payments designed to prop up the economy during the crisis accompanied spending increases.

“We know that during the pandemic, savings rates went up considerably and people who could pay down debt, paid down debt,” Sheldon said. “People in low-income brackets used stimulus to pay for essentials, and a lot of people in the middle and high end put that money into savings.”

Those figures will change in the months ahead as wealthier shoppers are expected to plow their budgets into categories like travel and entertainment at a greater rate—but even the lowest income brackets will spend more on hospitality.

“People who spend above average in the hospitality space had really pulled back, but now they are coming back in full force,” Sheldon said, noting that although hospitality spending will increase among all income brackets, “as you make more, you’re going to go back to eating out more.”

Nearly all income brackets expect to spend less on food and consumables in the next 12 months and spend more on clothing, consumer electronics and home improvement. “We’re going to return more toward what the wallet distribution used to look like in the U.S. in February of 2020,” he said. 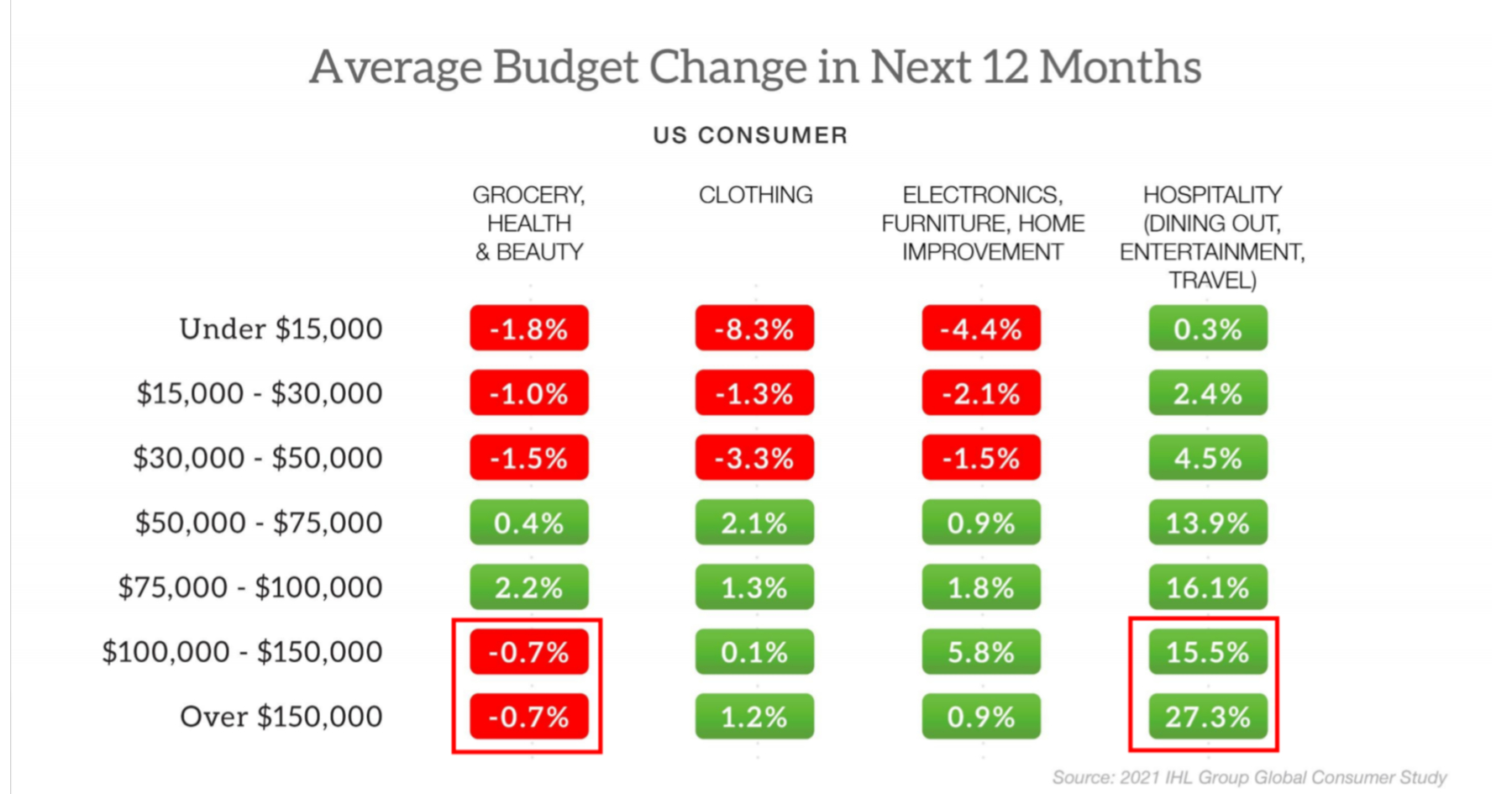 Most income groups will budget less for grocery and all of them more on hospitality, particularly wealthier shoppers, IHL data shows.

At the same time, the increase in new shopper journeys and fulfillment that accompanied 2020 are largely here to stay: Ninety-one percent of the digital shopping budget will be retained in the next 12 months, indicating that both stores and digital shopping will remain vital for consumers.

The spending reset will come amid headwinds for retailers—chief among them, an ongoing labor shortage that Sheldon predicted would eventually result in wage increases and higher consumer prices. “There’s only so much of labor you can squeeze out by process improvement and at some point you have to pass that on to consumers in the way of higher prices,” he said.

And while the pandemic proved a need for digital investment among retailers—and raised awareness of the importance IT spending among boards—investments may take longer to come to fruition amid a shortage of computer chips and port delays. “That could slow store digitization efforts,” notably those involving payment, Sheldon said. “What we thought would roll out in ’21 might be ’22,” he said.