Anyone who has done a double take upon seeing bumper stickers that read, “Pets Are People, Too,” is likely to find Impossible Foods’ new national advertising campaign—the company’s first—similarly a head-turner.

“We Are Meat,” proclaims the campaign from the Redwood City, Calif.-based company best known for its plant-based burger patties and sausages (carried nationally by the likes of Burger King and Starbucks). It’s a bold and provocative statement—but then, these are bold times for purveyors of plant-based meat and dairy alternatives, as plant-based products gain wider traction at national restaurant chains and more prominent placement in grocery cases.

It also comes at a time when the message that specialists in meat alternatives have been pushing for years—that their products really (no, really) taste like their conventional meat counterparts—may be resonating with more American consumers. Or, at least, more are willing to give plant-based versions a go: U.S. retail sales of plant-based meat alternatives increased 45% in 2020, passing $1 billion for the first time, according to the Plant Based Foods Association (PBFA) and the Good Food Institute (GFI), using data commissioned from Chicago-based market research firm SPINS. Also in 2020, 18% of U.S. households reported buying plant-based meat alternatives, up from 14% who said so in 2019.

Moreover, most of these consumers aren’t one-and-done buyers of plant-based products. Among those who purchased meat alternatives, 63% are “high-repeat customers,” according to PBFA and GFI. And the growth for meat alternatives, as well as in the plant-based alternatives market overall, came during what was a great year for sales of conventional meat.

It all points to the strength of the “flexitarian” trend, industry watchers say: Most American consumers aren’t looking to go entirely meatless, but many are interested in incorporating more vegetables into their diet and reducing their meat consumption, whether for reasons related to health, animal welfare concerns and/or environmental concerns.

“The plant-based category has evolved to the point that retailers can’t limit who they consider the plant-based shopper,” SPINS Head of Retail Dawn Valandingham said in a news release about the PBFA and GFI survey findings.

That has implications for retailers looking to meet the expectations of customers seeking a wider array of meatless options.

“We have seen a rather large increase in customers adding plant-based proteins to their diets over the past year,” says Christina Gayman, director of public relations for Hy-Vee. With more than 240 grocery stores throughout the Midwest, Hy-Vee is based in West Des Moines, Iowa—the No. 1 pork-producing state in the country. Hy-Vee customers’ growing interest in meat alternatives hasn’t come at the expense of meat, Gayman says; rather, consumers want ample, high-quality selections of both.

“In the case of meat and plant-based meat alternatives, we offer a wide variety of both because our customers let us know they want both, and our goal is to provide our customers with a complete protein selection,” she says. Hy-Vee stores carry both ground and frozen plant-based proteins as well as refrigerated plant-based brats, breakfast sausages, meatballs and ground chicken.

The plant-based category, Gayman adds, “does not appear to be a food trend, but rather a lifestyle choice.”

That tracks with what market researchers and other retailers are seeing, as well.

Ninety-eight percent of U.S. households purchased traditional meat products in 2020, FMI and the Meat Institute Foundation reported in March, and meat sales at retail rose 20% from 2019 to 2020. Amid the COVID-19 pandemic, many consumers who found themselves cooking at home more often bought a wider range of cuts than they had in the past and experimented with higher-priced cuts and varieties, given that they weren’t spending those food dollars at restaurants.

“It’s not so much about cutting meat out altogether; it’s really about finding a little bit of a better balance because of that health halo brought forward with vegetables especially.”

At the same time, 210 Analytics President Anne-Marie Roerink noted in a presentation in April, citing Datassential research, 58% of U.S. consumers said they want to increase their intake of plant-based foods, and 30% said they’d like to eat more plant-based meat alternatives.

“It’s not so much about cutting meat out altogether; it’s really about finding a little bit of a better balance because of that health halo brought forward with vegetables especially,” Roerink said. “It is really about the inclusion of items that people deem more healthful.”

It’s perhaps no surprise, then, that while the total U.S. retail food market posted robust growth of 15% in a COVID-defined 2020, and meat sales rose 20% year over year, growth for plant-based foods was even more robust at 27%, according to the PBFA.

It doesn’t hurt that plant-based alternatives—and notably, alternatives beyond veggie burgers—are getting a profile boost from meat-focused restaurant chains either. Jack in the Box introduced Unchicken sandwiches using patties from Tyson Foods’ plant-based Raised and Rooted brand in select locations in October. In April, hot dog specialist Nathan’s Famous announced it will debut a plant-based hot dog from U.K.-based Meatless Farm. The gluten-free, soy-free, non-GMO dogs (made with pea protein) are rolling out first to Nathan’s Shopify online store and then to select restaurants in Florida and the Tri-State area.

And in Chicago, 24-unit Buona Beef saw a healthy reception for its Italian Beefless sandwich, which also debuted in April. The plant-based take on the chain’s signature Italian beef sandwich uses seitan from Upton Naturals, and by the end of the new menu item’s first day in stores, it had sold out in several locations, the restaurant tweeted.

For retailers, successfully capitalizing on consumers’ curiosity about plant-based alternatives can hinge on how and where these items are presented, says Julie Emmett, senior director of retail partnerships for PBFA.

Show Them the Way

Having dedicated, prominent merchandising displays and signage touting plant-based choices can demonstrate a retailer’s commitment to serving alternatives-interested customers, says Emmett. Whereas vegetarian and vegan shoppers “will find what they’re looking for no matter what,” she says, flexitarians may benefit from additional guidance—in-store and online suggestions for how to cook and use plant-based sausages, for example.

Flexitarians “may not have plant-based items on their list necessarily,” she says, so signage and displays need to be more prominent. When they are, these customers respond. In a study that PBFA conducted with Kroger at the end of 2019 and the beginning of 2020, plant-based meat sales increased an average of 23% when these items were sold in the meat department.

The study, results of which were announced in July, “provides one more proof point that plant-based meats have moved from niche to mainstream,” Kroger Merchandising Director Sean Brislin said in a news release. “Kroger continues to experience double-digit growth in the plant-based category, and this test demonstrates the viability of shifting product placements to reach even more customers.”

Flexitarians are “such an important shopper overall,” Emmett says. Shoppers who purchase plant-based alternatives “tend to have a higher income and higher education, and they’re spending more in store,” Emmett notes. Being seen as the solution for shoppers seeking plant-based items—by carrying a range of choices and flavors and clearly labeling and promoting these items as meatless alternatives—is key to success in the category in an increasingly crowded marketplace, she suggests.

Scarborough, Maine-based Hannaford, an Ahold Delhaize banner, recently teamed with PBFA for a “Spring Into Plant Based” campaign that features in-store and online promotions of a dozen plant-based brands. A dedicated website, www.springintoplantbased.com, offers meal ideas and recipes along with links to the websites of each of the featured vendors.

Consumers seeking to broaden their plant-based horizons have a plethora of new choices from national brands as well as private labels. Late last year, Kroger added 50 new items to its Simple Truth Plant Based line, including Emerge Chick’n Patties and Chick’n Grinds, both of which customers can find in the meat department. Beyond Meat announced in April expanded retail distribution for a wider range of its products, including Beyond Meatballs, Beyond Sausage Hot Italian links and Beyond Breakfast Sausage links, newly or soon to be available at Kroger, Walmart, Target, Albertsons, Wegmans and Giant Foods. And Planterra Foods’ OZO brand in March announced the addition of several frozen items, including a Smokehouse burger, to its line of meat alternatives, which—unlike many plant-based offerings—is soy-free. 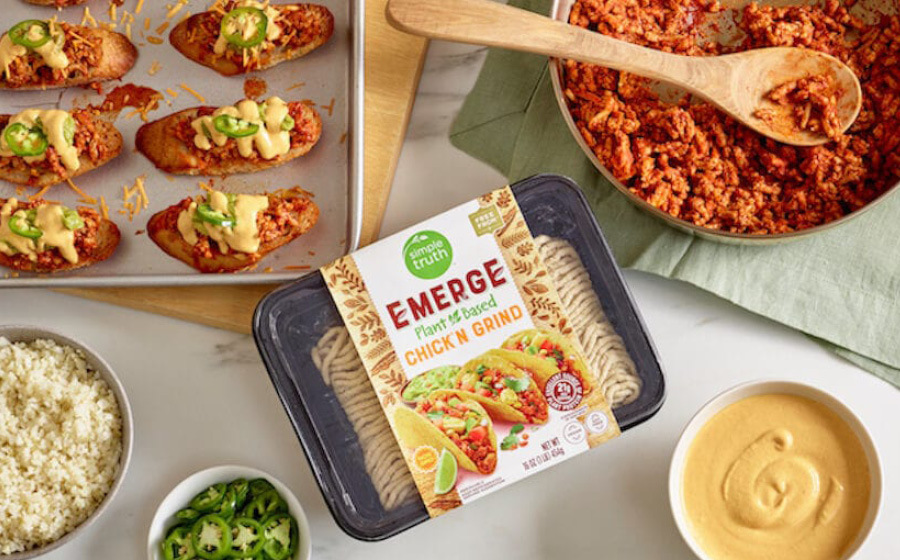 At Glen’s Garden Market, a 2021 WGB Remarkable Independents honoree, consumer demand for national plant-based brands such as Beyond Meat is “absolutely off the charts,” says store founder and owner Danielle Vogel. That surging interest in the past year came in tandem with rising sales for conventional meat, she noted. “It’s been an interesting thing to watch,” she says.

Beyond rival Impossible Foods, in declaring “We Are Meat,” makes no bones about its target audience: consumers who love the taste of meat. “Meat for meat lovers—made from plants,” the new campaign’s ads proclaim. Nine out of 10 people who eat Impossible products are meat eaters, the company notes.

Will consumers be on board with “We are meat”? It’s too soon to tell, but a lot more consumers this year will have the opportunity to decide for themselves: Impossible Burgers were available at about 150 grocery stores a year ago, the company notes. Now, they’re at more than 20,000.