Orto Ricci in collaboration with Agronova and SAIS Eleonora Pistelli, Marketing manager of Orto Ricci explains: “The Orto Ricci company was established 80 years ago in the province of Rome, in Anzio. We produce and market vegetables on 40 ha surface. Over the years, the company has strongly specialized in aromatic herbs, first of all basil. We produced basil both cut and in a pot”.

She continues: “In the last years, especially during the last one, the trend market shows how the percentage of consumers sensitive to wholesomeness of food has increased”.

“A few years ago we started with a cultivation system that would limit the concentration of Nickel in basil leaves at minimum. Now, we are ready with line of basil bio-fortified with Selenium”.

Selenium is a trace element that is naturally present in many foods and available as a dietary supplement. Selenium, which is nutritionally essential for humans, is a constituent of more than dozen selenoproteins that play critical roles in reproduction, thyroid hormone metabolism, DNS synthesis and protection from oxidative damage and infection.

The RDA’s (Recommended Dietary Allowances) are 55 mg day -1 for an adult. The Selenium deficiency often goes unnoticed and it is an example of hidden hunger. Hidden hunger, also known as micronutrient deficiency, afflicts more than two billions individuals or one in three people globally (FAO 2013).

Hidden hunger is a form of undernutrition that occurs when intake and absorption of vitamins and minerals are too low to support good health and development.

Selenium exists in inorganic and organic form. Both can be good dietary sources of selenium. In soil there are inorganic forms, known as selenites and selenates, that plants can uptake and convert into an organic form.

The quantity of selenium in a given type of plant-based food depends on the amount of selenium in the soil. Selenium concentration in plants differs widely by geographic location. Some areas are naturally poor in Selenium.

One of the most cost-effective strategies to fight global micronutrient deficiency is the biofortification of crops through agronomic techniques, conventional breeding or modern biotechnology.

Fertilization is the most common biofortification for vegetable crops. For controlling Selenium content in plants, it is essential to study the dynamic of uptake and distribution of Selenium in the plant in addition to its effect on plant growth and yield.

Plants mainly uptake the Selenium as selenate and selenite but they can also absorb organic forms but not insoluble elements Se or metal selenide compounds. Generally selenate is the most soluble and available form of Selenium for plants.

Plants can increase selenium content from the soil, by foliar application, by soaking seeds in selenium solution, seed dressing or by the nutrient solution in hydroponic cultivation.

“We knew from some studies that the addition of selenium to the nutrient solution enhances the Se concentration in Basil without decreasing the yield and the qualitative characteristics of the final product,” says Alessandro Cinelli, owner of Agronova, a consulting company specialized in horticultural production and nursery activities. 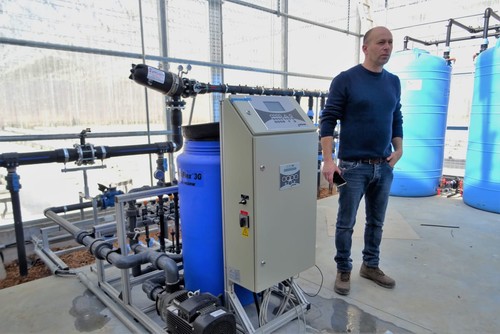 “Furthermore we knew that the addition of Selenium in nutrient solution increased the Se concentration in all plant organs. However the highest percentage of selenium accumulated in the leaves, followed by the roots, stems and inflorescences”.

“By a study carried out by Dept. of Agriculture, Food and Environment of University of Pisa and the Institute of Ecosystem Study of CNR, we also understood that the partitioning of Selenium in the leaves, roots and inflorescences was directly affected by the Se concentration in the nutrient solution. The accumulation in the stems was less sensitive to different Se treatments. We also know that selenium concentration in the leaves is higher when the plant absorbs the element from the roots rather than by foliar spraying”.

Valentina Melella, Technical Manager of Orto Ricci, says: “Considering that the leaves of the younger plants accumulate the highest concentrations of selenium, we should have used a fast-growing variety in order not to age the roots too much by limiting the uptake of selenium. Therefore we carried out some internal tests in collaboration with Agronova and SAIS Sementi, to identify which variety was most suitable for our goal. At the end of trials we chose Gemini, a variety from SAIS Sementi”. 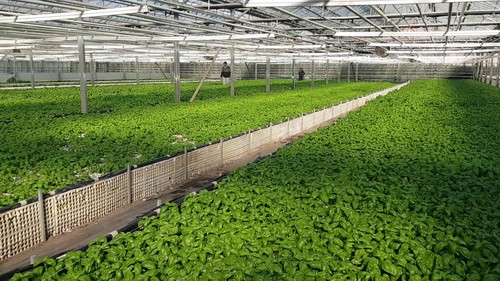 Franca Castagnoli, Manager of R&D of SAIS, says: “Gemini is a variety obtained from SAIS research. The plant recalls the traditional type of ‘Genovese’. The Gemini variety has intermediate resistance to Peronospora belbahrii and high resistance to Fusarium oxysporum f.sp basilicum. In this specific case, the challenge was to get more cuts by limiting the senescence of the roots that affects the uptake of Selenium from nutrition solution. The fast regrowing of Gemini overcomes the challenge”.

On the right: basil Nickel tested

Valentina Melella says: “We produce both cut and pot basil. The cut product is cultivated with a floating system while the pots rest on a sub-irrigated rug. The selenium- fortified line is sold as a cut product, as well as the low Nickel line.”

She continues: “We develop dedicated nutrient solution, with selenate, that get selenium amount in leaves of 2.5 mg/kg. Usually we schedule a maximum of three cuts that are planned according to the growth of the leaves. Generally we cut shoots of 15-20 cm long. We noted that the amount of selenium does not change among the cuts”. 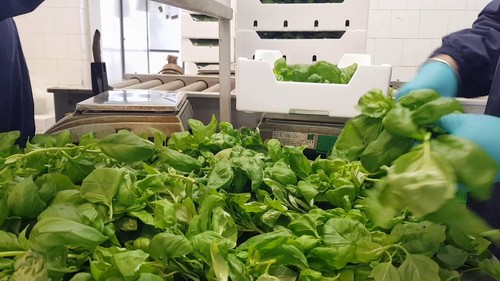 Eleonora Pistelli asserts: “We are satisfied with this goal. We are trying to get better, however it is an excellent start. The line of basil with a minimum level of Nickel (around 0.008-0.003 mg/kg) and fortified with selenium will be ready next month for the first sales with dedicated packaging.”