Although Joe Lofthouse has successfully managed tens of thousands of head of cattle, learning to manage an underappreciated aspect in feedlot production is what has made the greatest difference.

The ability to work effectively with others has been one of the most valuable skills throughout his career in feedlot management. “I’ve always said it wasn’t the amount of cattle I had to look after, it was the amount of people, and understanding how to get the best out of people,” says Lofthouse.

“I think one of the most important things is to get involved with them and never ask anybody to do anything that you can’t do yourself, and always be prepared to jump in and show somebody and help them.”

Hands-on leadership is a foundational aspect of Lofthouse’s newly launched feedlot management and consulting business, Lofthouse Livestock Services, based out of Linden, Alta.

Lofthouse’s story begins across the Atlantic, in the north of England. He was born in Yorkshire, where he spent part of his childhood before his family moved to East Anglia.

“I’ve been involved in livestock all my life. My dad and his father had a small farm plus a butcher shop back in England,” he says. “As I grew up and left school, I started working for a few livestock guys, and then I started keeping sheep and cattle of my own.”

Lofthouse and his family immigrated to Canada two decades ago, eventually settling in southern Alberta. Coming to a different climate and working in an unfamiliar agricultural system was a new challenge for Lofthouse, who was eager to understand the Canadian context of livestock production. He knew that what worked in England wouldn’t necessarily work in the Canadian Prairies. While there were some ideas he knew he could bring from England, he found he had to “listen and get involved with the Canadians,” he says.

“I think I’ve been pretty fortunate,” he continues. “I think Canada, it’s a land of opportunity, more opportunities here than what I would ever have seen back in England.”

Raising sheep and cattle in England set him up for an interesting career, one that has made use of his expertise in both species. Before coming to Alberta, Lofthouse managed a sheep feedlot in Saskatchewan with a 26,000-head capacity, custom-feeding lambs for Sunterra Farms. Because of this experience, he was asked to establish an on-site sheep feedlot when he started working for Echo Sand Ranching at Acme, Alta.

He went on to run Echo Sand Ranching, managing the 7,000-head feedlot at its Sandy Crest location and working with its 4,500-head cow-calf program. This included calving 650 heifers every year and using the Herdtrax data software to record herd information. To go from managing sheep feedlots to a beef feedlot wasn’t a huge change, as Lofthouse found the two types of operations to be quite similar. His most recent position was feedlot manager at Acme’s Korova Feeders, where he co-ordinated anywhere from 40 to 45 employees each day. 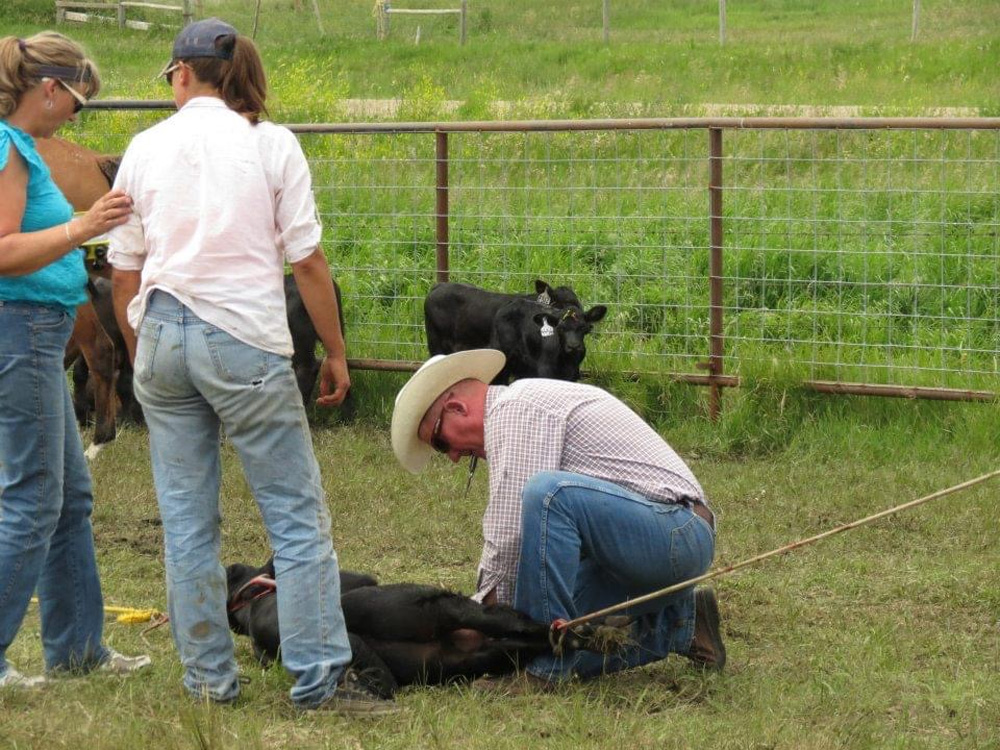 Lofthouse was born and raised in England, and has worked on sheep and beef operations in the U.K. and Western Canada.
photo: Denise Lofthouse

“I worked closely with Doug Price, (owner of Korova Feeders and Echo Sand Ranching) introducing new work practices and mentoring employees with the goal of improving the feedlot’s efficiency and profitability,” he says. “By implementing these new practices, the capacity has gone up to 24,000 head from 16,000 without having to increase its carbon footprint.”

At Korova, Lofthouse played a major part in designing and constructing the second feedlot location, a state-of-the-art facility with a 14,000-head capacity. He also spent two seasons at the company’s grazing and organic farming operation, Big Sky Grazing, in Stockholm, Sask., heading up a 7,000-acre harvest while also managing a grazing operation with cattle numbering in the thousands.

Taking this experience into his new business, Lofthouse Livestock Services, caters to both feedlot and cow-calf operations with a focus on mentorship and using critical thinking to solve problems. His approach is hands-on and takes into consideration the management of people as well as the operation as a whole.

“Sometimes I think a lot of these operations don’t spend time with the young people to get the best out of them,” he says.

He believes strongly in the value of mentoring young people in agriculture to share knowledge and make the most of an individual’s natural ability. In addition to regularly judging 4-H Achievement Days and regional sheep shows, he was very involved with his children’s 4-H beef club and served on the Calgary Region’s 4-H on Parade heifer committee during that time.

“There’s too much leadership where it’s coming from the office all the time,” he says. “I’ve found to get the best out of your people, you have to give up a certain percentage of your time to get out and help them and just mentor them, show them what we’ve learned over the years and what mistakes we’ve made and how we’ve improved.”

Lofthouse has seen firsthand how incremental progress can result in big improvements in both feedlot and cow-calf operations, and this is what he hopes to achieve in working with producers.

“If you can go into a feedlot and help improve the crew and they can then go and do better jobs within that feedlot, it doesn’t take much to help the performance of the cattle,” he says. “If I can help change the conversion in a feedlot just a little bit, it more than pays for what I’m doing.”

One of his upcoming projects is with a purebred Charolais and composite breed cow-calf operation. This project will include marketing bulls and installing GrowSafe Systems monitoring technology to measure performance traits. He’s looking forward to helping this operation use performance data to improve the herd’s feed efficiency.

He credits his past opportunities working on operations with advanced performance data systems used to inform breeding and marketing decisions. Working with Price as well as veterinarians Kee Jim, managing director of Feedlot Health Management Services, and Troy Drake, creator of the Herdtrax software program, has been very valuable to him.

“I’ve learned a lot off those guys, and that’s how I want to be able to pass some of my knowledge back to these younger people.”

As well, he views this new path as a chance to continue learning. It not only gives him an opportunity to meet and help more people, but also learn a lot more himself.

“I haven’t finished learning and getting better at what I want to do yet.”

His goal is to build his business so he can create a larger role for his son, Thomas, who runs his own business for custom farming and clipping cattle for sales and shows. “I hope to grow it so that I’ve got enough work for myself but can bring Thomas into it as well, because he’s got experience to give to me and to other people, too.”

“When I was at Korova we had probably eight or nine different nationalities, so I’ve always found that really interesting, and it doesn’t matter where you come from in different countries, you’ve always got a little bit of an idea of what’s going to help improve your operation.”