Small Robot Company (SRC), a British agritech start-up for sustainable farming, today announced its first commercial robot, ‘Tom’. The Tom monitoring robot is now delivered to commercial specification and entering service on UK farms. Customers include the Lockerley Estate, where robots are a key part of its regenerative farming strategy, as well as Waitrose & Partners and the National Trust.

SRC’s first service using Tom will be per plant weeding, a world-first milestone. This is now in field trials (see demo video), with Tom scanning first arable crops to detect weeds, and robot weeding prototype ‘Dick’ then zapping individual weeds with electrical ‘lightning strikes’, using no chemicals. On-farm pilots of the service will commence this autumn.

With up to 95% of chemicals wasted in the current farming system, this new non-chemical weeding technology will be significantly more nature-friendly and better for biodiversity. In future, Tom will also gather data from multiple sources, such as sensors and microphones for birdsong and pollinators, to assess soil health and biodiversity.

Manufactured in Northumberland by Tharsus, Tom will also be going into 5G trials in Dorset in the autumn in the £8 million 5G RuralDorset project.

World-first milestone: per plant weeding
A world-first, SRC demonstrated its new per plant weeding capabilities in technology demos at the Lockerley Estate, Hampshire. SRC showed a pair of robots, ‘Tom’ and ‘Dick’, working in concert with its artificial intelligence Advice Engine ‘Wilma’ to identify and kill individual weeds with electricity. The ‘Dick’ robot prototype deploys RootWave non-chemical weeding technology mounted on an igus delta robotic arm to zap the weeds.

This is a major technological milestone which will enable automated, precision, per-plant weeding both at scale and autonomously, for the first time providing a post-chemical future for arable farmers. 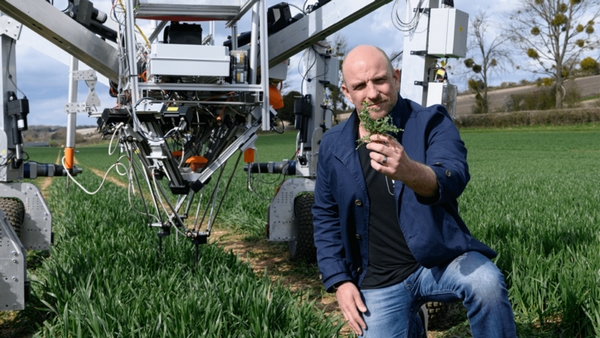 “To prove the power of per plant farming we are focusing on answering the biggest problem that farmers face at the moment which is weeding,” said Ben Scott-Robinson, CEO and co-founder, Small Robot Company, “We’ve now proved we can deliver per plant weeding: a world first. The focus for us now is being able to move forward to deliver this, repeatedly, and at scale. This will be game-changing.”

“Weeds, especially black grass, are crippling. It’s costing the industry a fortune,” commented Craig Livingstone, Lockerley Estate farm manager and National Food Strategy advisory panel. “Resistance to herbicides is the number one problem. The robot offers us a real chance to stop using artificial inputs, which goes towards our regenerative model of farming.”

Transformational for agriculture: trial plots, Net Zero and biodiversity
Tom’s scanning and measurement capabilities are also applicable to lots of wider players in the agriculture industry. The new mapping service offers highly accurate and repeatable measurement of crop data, with the opportunity for every field to become a trial plot. With trial plots yielding as much as 20 tonnes of wheat per hectare, versus the average of 8.4 tonnes on UK farms, there is considerable opportunity to improve performance.

Tom’s highly accurate measurement capabilities will also help enable farmers to access the new post-Brexit Environmental Land Management (ELMS) payments, due to be introduced in 2024. The new scheme creates a framework that links food production and the environment, and will replace subsidies with ‘public money for public goods.’

“The UK – and UK agriculture – have made bold commitments to Net Zero,” said Sam Watson Jones, President and co-founder, Small Robot Company. “Robotics can already take billions of accurate measurements in each field. This will transform the way that farms are able to sequester and cycle carbon, and measure that accurately. The opportunity for UK (and global) agriculture to support the transition towards Net Zero is enormous.”

Craig Livingstone said: “The climate and biodiversity emergency are here and now for farming. The carbon objectives for our business are really important, focusing strongly on our operations emissions reductions and carbon sequestration. An overarching strategic aim for our business is to be Net Zero, and robotics will be a key tool to take us there.”

Rob Macklin, the National Trust’s Head of Farming and Soils, agreed: “Technology needs to play a big part in solving many of the issues we currently face in farming – particularly improving soil health and carbon sequestration, reducing our reliance on fossil fuel power and fertilisers and avoiding the adverse impacts of synthetic chemicals on the environment. We have started small robot trials at Wimpole and intend to extend trials to other estates in the near future.

Andrew Hoad, Partner & Head of Waitrose’s Leckford Estate, commented: “This technology could be truly groundbreaking and has the potential to shape how we farm in the future. By helping us be more precise and targeted in controlling weeds and managing pests, this next generation of farming robots could in turn help us protect biodiversity on our land and preserve the natural environment for future generations.”

Tom is now delivered to commercial specification, ready for ramp up of the service to more than 100 farms in 2023. 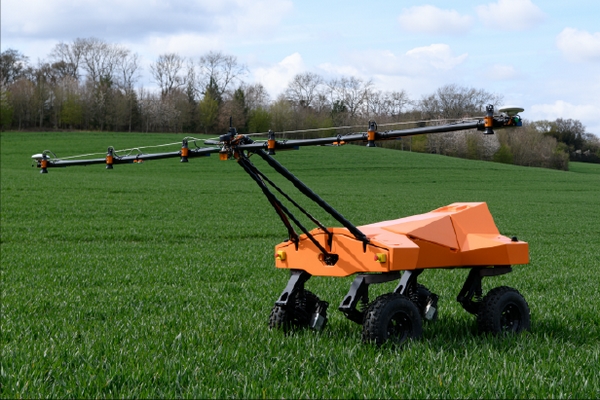 Tom is now delivered to commercial specification, ready for ramp up of the service to more than 100 farms in 2023. Tom was manufactured in Blyth, Northumberland by Tharsus, the UK advanced machine and robots designer and manufacturer. The British company also manufactures Ocado’s warehouse robots for global sale.

Other benefits from the mapping service include yield predictions, measurement of herbicide efficacy, and giving farmers the ability to take “no spray” decisions with confidence. The first crop for the service is wheat. SRC is now working on being able to recognise different weed species, with the next phase being multiple crop types. It has also just started a project to be able to detect disease in wheat.

Also being piloted is SlugBot, working with partners Crop Health and Protection (CHAP), in which Tom uses hyper-spectral cameras to detect slugs at night, and then treat them biologically with microdoses of nematodes.

Tom will cover 20 hectares per day autonomously, collecting about 6 terabytes of data in an 8 hour shift, and detecting millions of data points per field. As an example, Tom collected 12.7 million plants in a single 6 hectare field, of which 250,000 were identified as weeds.