Dutch and Belgian deliveries expanded steadily, but Spanish peppers lost in importance. Demand was met much better than in previous weeks. This had an impact on prices, which dropped noticeably. In most cases, however, only the red and yellow offers were affected by the price reductions; the green ones often cost as much as before. In Hamburg, they even became slightly more expensive.

Moroccan imports were quite cheap in some places, at €15 per 5-kg carton, so that they could be sold off quickly. In Frankfurt, domestic products cost around €6 per kg, but customers were still happy to buy them. Turkish goods became scarcer in Berlin, but this did not affect their prices. On the other places, too, the prices often remained at the previous level. 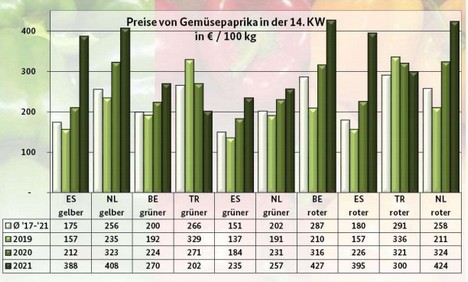 Apples
Domestic products obviously dominated the scene. The quality of European items was generally convincing. Sales were slow and the prices did not change significantly.

Pears
South African offerings predominated, led by Rosemarie and Williams Christ. The handling of batches from the southern hemisphere was quite good. Only locally, thing were sometimes slow, as customers tended to focus on Italian produce.

Table grapes
South African imports dominated. Demand picked up in some cases. However, this did not result in price increases.

Strawberries
Increased supplies, wintry weather and the resulting reduced interest, as well as returns from food retailers, were the reasons for weak trading. The turnover slowed noticeably.

Oranges
The campaign was apparently already on the home stretch: Demand faltered and deliveries decreased.

Lemons
Due to the cold weather, demand was quite good. Spanish shipments dominated and were even monopolizing the market at certain points.

Cauliflower
French products seemed to dominate events. For first domestic lots, some people had to pay €15.00 to €16.50 per 6-pack at points.

Lettuce
Lettuce came from Belgium, Italy and Germany. In general, the availability was limited. But it was enough to satisfy the demand, which was slow.

Cucumbers
Dutch, Belgian and domestic cucumbers formed the basis of the assortments. The availability was a little too abundant in some cases. The traders therefore had to adjust their prices downwards from time to time.

Tomatoes
The supply apparently outstripped the accommodation possibilities. To avoid surpluses, distributors were therefore forced to lower their prices.

Asparagus
Traditionally, business is always a little slower the week after Easter than before. Demand was lower anyway. The wintry weather caused it to noticeably drop further.