Improving technology, coupled with the difficulty of sourcing seasonal labour, has led to a significant investment for Fram Farmers member Home Farm Nacton in Suffolk.

The organic fresh produce farm has taken delivery of a Robotti 150D, from Danish manufacturer Agrointelli, which is the first robotic tractor in the UK, and is now fully operational on the farm.

Producing both organic and conventional vegetables, including leeks, brassicas, onions, red beet, potatoes, fodder beet, sugar beet and cereals, across 1940ha, Home Farm was looking for ways to adopt more advanced technology into the business, and the Robotti 150D ticked all of the boxes.

Investment
“Through our Fram Farmers membership, I heard about Robotti from Gordon Cummings, Fram’s machinery manager, who had been looking into the use of robotics in the fresh produce sector for some 2 years,” explains Andrew Williams, farm director at Home Farm.

“By January, I had approval from Home Farm’s board of directors, who were easily convinced that this was the right step forward. From a business point of view, we are confident that this is where the future lies,” he continues.

“A large amount of our produce is organic, so we are increasingly limited in how we can control weeds. Mechanical weeding is repetitive work, as is manual weeding, and sourcing seasonal, overseas labour is becoming increasingly difficult. We wanted to future-proof the farm and Robotti is perfectly suited to our set-up.”

The Robotti 150D has now been in operation on the farm since mid-April, weeding a number of vegetable crops using a harrow attachment. This is one of 50 robots which will be working in Europe by the end of the year. 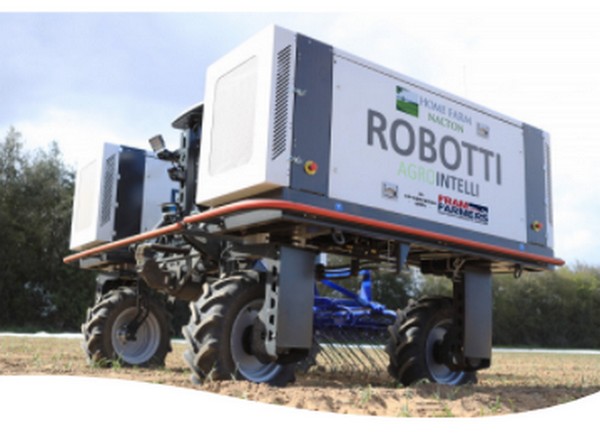 Technology
Designed and manufactured by Denmark-based Agrointelli, Robotti 150D is autonomously controlled by GPS via an onboard computer, not depending on a human driver, instead following a pre-programmed planned route in the field.

The model at Home Farm has two Kubota 75 HP Diesel or bio fuel engines; the left engine propels the machine and powers the conventional 3 point hitch, meaning it can be fitted with standard implements and perform multiple tasks in the field throughout the season. The right engine drives the PTO. Each engine takes 110 litres of fuel, which is enough for the machine to run continuously for approximately 24 hours.

“The accuracy lies in the GPS mapped field, with Robotti taking the same exact lines every time,” explains Frederik Rom, Agrointelli sales manager. “It is equipped with RTK GPS, so the set up on any farm is simple. It took approximately 10 minutes to map a four-acre field at Home Farm, and a further 10 minutes to log the weeding plan into the system. It is important for this to be accurate from the start, as it will determine reliable performance,” adds Frederik.