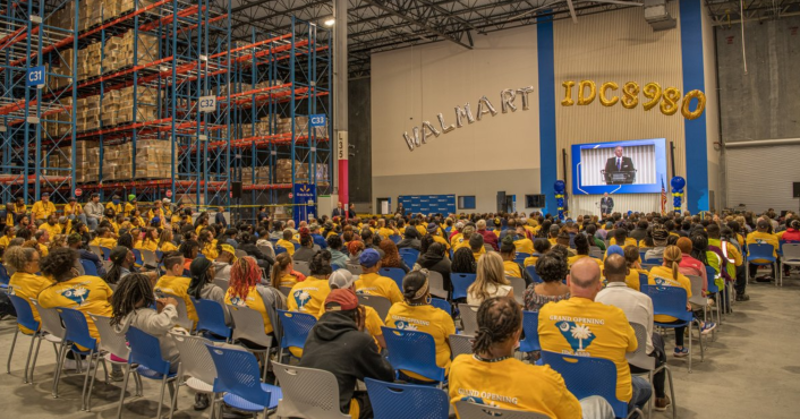 It’s a new port in the supply-chain storm for Walmart: The Bentonville, Ark.-based retailer has opened a new import distribution center in Ridgeville, S.C., about 38 miles from the Port of Charleston.

The ribbon-cutting for the 3 million-square-foot facility at 1030 Timothy Creek Road in Ridgeville took place April 22. Once fully operational, the $220 million center is projected to increase the volume of goods moving through the Port of Charleston—the country’s eighth-largest port—by about 5%, according to a Walmart news release.

The center will sort and store imported goods arriving through the Port of Charleston for distribution to 850 Walmart and Sam’s Club locations across the Southeast, according to the retailer. South Carolina’s Dorchester County was selected for Walmart’s seventh import distribution center because of the state’s “business-friendly environment” as well as its proximity to the port, Walmart stated.

“South Carolina is home to some of the country’s most convenient and efficient modes of transportation, including the Port of Charleston and Interstates 26 and 95,” said Jeff Holzbauer, general manager of the new facility. “Being a member of this community means having the advantage of the region’s existing infrastructure as well as a pool of experienced associates familiar with it.” Nearly 1,000 associates have been hired so far to work at the center; Walmart said it expects to soon employ more than 1,300 associates full time at the center.

At the import distribution center’s grand opening on April 22, Mike Gray, SVP of supply-chain operations for Walmart, said the new facility will give the company “expanded access to seaports, in turn, allowing us to deliver a wide selection of merchandise from around the globe” to meet Walmart customers’ expectations of broad assortments in stores and online.

As part of opening-day celebrations, Walmart presented a gift of $10,000 to Going Places, a local not-for-profit organization that provides bicycles to area children in need.