Surging costs of imported commodities drove China’s factory-gate inflation to its highest level since 2008, raising the odds that exporters will begin passing on higher prices and boost inflationary pressures in the global economy.


The producer price index climbed 9% in May from a year earlier, driven by price increases for oil, metals and chemicals, the National Bureau of Statistics said Wednesday. The median forecast in a Bloomberg survey of economists was for an 8.5% increase. Consumer inflation increased only 1.3% from a year ago, missing an estimate of 1.6% and suggesting retailers aren’t hiking prices yet due to sluggish domestic demand.


Intense competition among manufacturers in China, which is the world’s top exporter, has had a deflationary impact on global consumer prices since the 1990s. Now, rising costs and surging export demand mean some factories could soon start hiking prices due to low margins, just as inflation starts to pick up in the U.S. and elsewhere following vaccination roll-outs that have allowed economies to re-open. 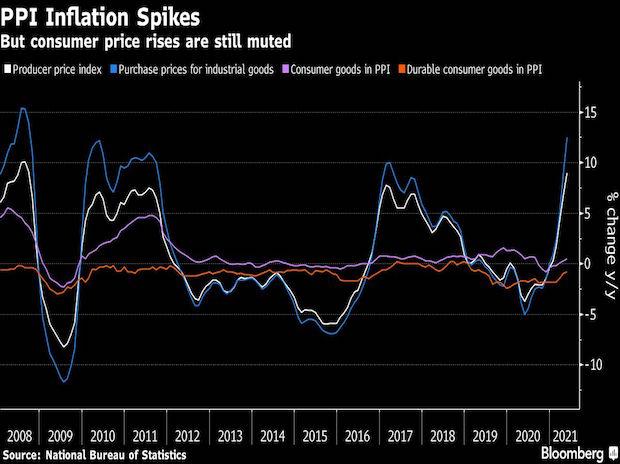 “Export prices may pick up in dollar terms due to the currency appreciation” of the yuan, said Michelle Lam, Greater China economist at Societe Generale SA. “Supply-side bottlenecks in other emerging market countries are also favorable for the bargaining power of Chinese exporters.” However, the prices pressures will only be transitory, she said.


Goods imported from China make up a relatively small component of the basket used to calculate inflation in advanced economies, meaning that exporter price hikes would need to be large and sustained in order to disturb central banks ultra-loose monetary settings.


So far, manufacturers are absorbing higher costs, rather than passing them on to customers. “It is impossible to pass on the cost to consumers even in overseas markets. Producers have to eat up these costs,” Iris Pang, chief economist for Greater China at ING Bank NV, told Bloomberg TV. Upstream producers — who have seen strong profit growth on the back of Beijing’s efforts to rein-in excess capacity in recent years — have scope to absorb price increases and shield downstream producers, she added.


Global commodity prices have rallied this year on strong property investment in China and record stimulus by governments around the world, combined with supply constraints caused the coronavirus pandemic.


Beijing has launched a campaign to curb prices by cracking down on financial market speculation on commodities as well as hoarding, which have caused slight declines in prices in recent weeks. But ultimately authorities have limited leverage over prices of imported goods such as iron ore. 
The People’s Bank of China sees the inflationary pressures as transitory, in our view. It’s also mindful of the need to sustain support for an incomplete economic recovery. A rate hike isn’t likely anytime soon.


The government is intensifying its efforts with officials considering imposing price controls on coal, according to people familiar with the plan. Officials have said that while the PPI could continue to rise in the coming months, they expect prices for imported commodities to moderate in the second half of this year as global supply recovers.


Stocks were unfazed by the data and news of price controls on coal, with China’s CSI 300 Index little changed as of 2:40p.m. in Shanghai. The onshore yuan strengthened slightly to 6.3941 per dollar.


ALSO READ: China’s imports up 51% yoy in May, grow at fastest pace in a decade


The bulk of producer price increases in May were in upstream sectors such as the mining and processing of metals and chemicals, which tend to rely on imported inputs, while increases in industries like furniture and textiles have been minimal. Base effects from last year — when China was still in the process of re-opening its economy following coronavirus shutdowns — accounted for a third of the total PPI growth, said statistics bureau economist Dong Lijuan.


Within China, consumers are cautious and retail sales growth rates are still around half their pre-pandemic levels, which limits opportunities for retailers to raise prices. Due to weak demand, which is being further repressed by sporadic small coronavirus outbreaks, such as a recent spike the province of Guangdong, consumer inflation might not see sustained rises until the fourth quarter of this year, ING’s Pang said.


Core CPI, which strips out volatile food and energy costs, rose 0.9%, with most of the increase in consumer prices coming from non-food items. The almost 24% fall in pork prices undercut stronger price rises for most other foods. Even though inflation remains comfortably below the CPI target of around 3%, the government pledged to increase the supply of key food products to stabilize prices and add to the national pork reserve, according to the report of a meeting held Tuesday.


The link between PPI and consumer prices has weakened in China over the last five years. Intense competition among smaller businesses, spurred by the rise of e-commerce, and subdued domestic demand caused by Beijing’s campaign to stabilize total debt in the economy means factories have been absorbing rising input costs rather than passing them on to consumers at home.


That gives the People’s Bank of China more room and it’s unlikely to raise policy interest rates while consumer spending is still recovering.