Besides orange pumpkins from Argentina, Israel and South Africa, OTC Organics expanded their assortment with organic pumpkins from Colombia. In 2016 they explored the possibilities to grow organic pumpkins in this country. Thanks to the sunny climate, the rainfall during growing periods and good transportation possibilities, Colombia proves to be extremely suitable for growing the most delicious organic pumpkins. Last week the first containers arrived in the Netherlands, and OTC Organics is excited about the quality and appearance of the pumpkins.

Pilot projects
In 2016 OTC Organics started a pilot in 3 different regions under supervision of Product Development Manager Alexander Restrepo. The growers started the project using highly selected pumpkin seeds on various small surfaces. Thanks to his agricultural background, Alexander was able to teach the growers different cultivation techniques. Based on the outcomes, they have selected a grower who has already years of experience with growing organic limes. His growing area is located in the south of Colombia at 600 meters above sea level. The first harvest of pumpkins was of good quality and this was the decisive factor for continuing the project. In March 2018 OTC Organics received the first container of organic pumpkins in their warehouse in Poeldijk, The Netherlands. The first containers were used for semi-commercial trials. Now the final step is commercial shipments for a wider audience. 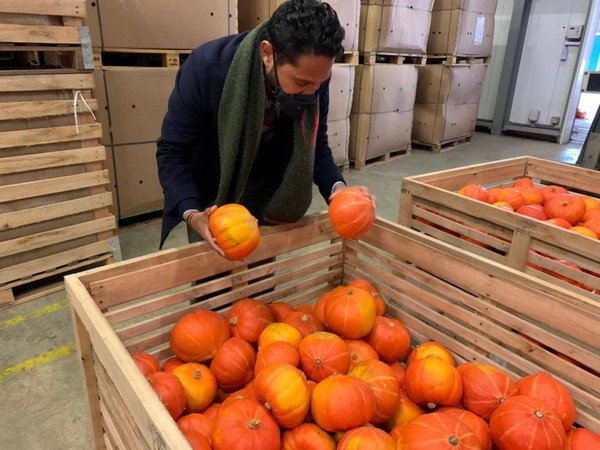 Joint Venture with Equilibria
OTC Organics believes 100% of the potential and advantages of Colombian pumpkins. The quality is stable, weather conditions are favorable for the production and food-print of the product are for sure lower than ones of other origins. That is why OTC Organics established a joint venture with Equilibria for developing the production, and for export and distribution to Europe. Equilibria is a Colombian multi-crop agricultural producer that aims to transform lives with sustainable agriculture and envisions to target international markets through a 100% vertically integrated business model. Both OTC Organics and Equilibria saw potential in the organic pumpkins. Besides along the route they found a common philosophy in the way of approaching business of both companies and that made things easy to embark themselves in this pumpkin partnership.

Arrivals and quality
Juan Pablo Duque, CEO of Equilibria: “The first containers are in the Netherlands, a bit later than what we expected but it has been a fruitful learning process. The most important aspect of this first exercise is that the quality and appearance of the pumpkins are great. Next year we will be back stronger and with more volumes to win our place on the market.”

At OTC Organics, Alexander Restrepo, reckons that there are some points that need to be improved but those are already detected and an strategy is being designed to solve these for the next season. Alexander: “It is a matter of getting the expertise and not everything goes smoothly on the first spin.”

Future plans
The plan of OTC Organics and Equilibria is to increase areas for the new season, and keep conquering customers with Colombian organic pumpkins. “We are sure our buyers will be delighted with the product and the opportunity to add another pumpkin origin to their portfolio.”, Alexander concludes.