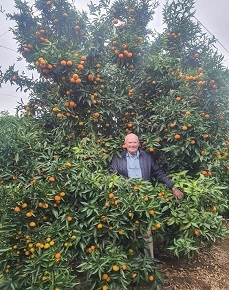 “We’ve got a very big crop, with nice size, generally a very good crop,” says George Hall, director at Dibanisa Fruit and a citrus grower himself at Tangelo Citrus Estate, located on Sovereign Farm at Buffeljagsrivier.

“Last winter was the first proper winter we’ve had in six years, probably. That’s helped. However, we have had our challenges with the ports and a shortage of containers.”

And the recent floods. “It’s been a very long time since we had so much rain in such a short period of time,” George says of the 200mm of rain that fell in Swellendam two weeks ago. In Stormsvlei and Bonnievale trees were washed out in some orchards when long-dormant rivulets sprang to life. There are orchards that cannot be restored, but most of the dislodged trees are being prepared at temporary nurseries for replanting when orchards have been restored. Fortunately the trees were under bearing age.

Soft citrus season two weeks late
The citrus season on the farms of the citrus growers – mainly lemons and soft citrus – from around Swellendam, Worcester, Bonnievale, and Ashton whose fruit is packed at Unipack, is two weeks late. The mostly UK-bound Satsuma harvest has ended and clementines are in full swing.

“As far as soft citrus goes, Dibanisa Fruit is one of the larger grower-exporters in South Africa,” George remarks. 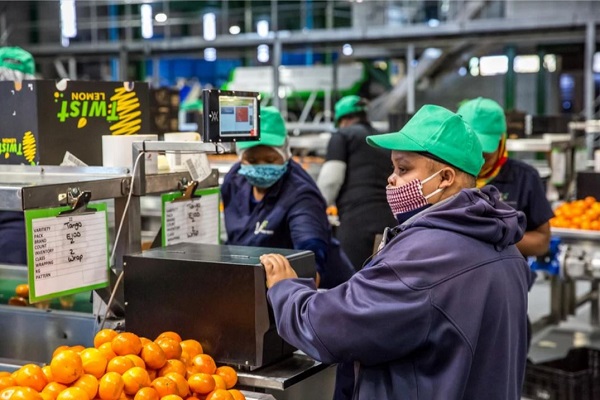 Dibanisa Fruit’s main markets are the USA, the UK and the European Union. “Brexit has made our UK exports a little bit easier as far as phytosanitary measures go, since the UK doesn’t have a citrus industry.“

He adds: “Market demand is definitely under pressure, there is a lot more fruit coming in, with some pressure from South America. The fact that restaurants and bars are still closed in places, means that demand for lemons has dropped. Soft citrus is more mainly retail-oriented and there we have not seen too much of a change.” 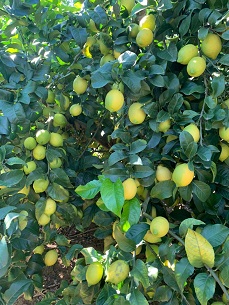 Since the start of their season in April, stacks have been a constant problem with the delays in the port, and it doesn’t help that the season is late.

To mitigate the risk and to timeously service their European programmes they’ve been loading breakbulk, as well as containers, which is, he notes, the wise thing to do.

Container constraint has been relieved by recent positioning of empty containers in South Africa, but container availability is a problem that will remain, he believes.

“We’re a long term industry, we’ve been supporting the shipping lines for years. Shipping lines need to look after us,” he says, adding: “Our ports are another big problem, a big headache to us. Transnet [the state ports authority] is not investing in equipment and efficiencies, at the expense of the economy.”

He refers to The World Bank’s 2020 Container Port Performance Index which places all of South Africa’s ports stone last; Cape Town is in 347th position. He calls the state of cranes at Cape Town “diabolical”.

The Container Port Performance index consists of two formats, based on either a statistical or an administrative approach. According to both approaches, South African ports cluster at the bottom. The lowest ranking of 351st position is occupied by either Nqgura harbour (when the statistical approach is employed) or by Durban harbour (according to the administrative approach).