The campaign, announced this week, spotlights quick and easy recipes that people can eat during the holiday season and throughout the year, including holiday dishes and cookies for Santa. Iselin, N.J.-based Allegiance said the goal is to provide convenient meal solutions to shoppers, as the demands of work and family activities — and cooking fatigue amid the pandemic — can present challenges to making time for a home-cooked meal.

Customers also can participate in the Three-Ingredient Challenge by sharing their favorite three-ingredient recipes for the chance to win a $100 Foodtown gift card. The contest, for shoppers and store associates, runs through mid-December.

“This exciting program engages a 360-degree approach to strategically promote the campaign through all marketing channels,” Donna Zambo, vice president and chief marketing officer for Allegiance Retail Services, said in a statement. “We aim to build awareness that Foodtown is an integral member of the community, dedicated to the health and wellbeing of our associates and customers.” 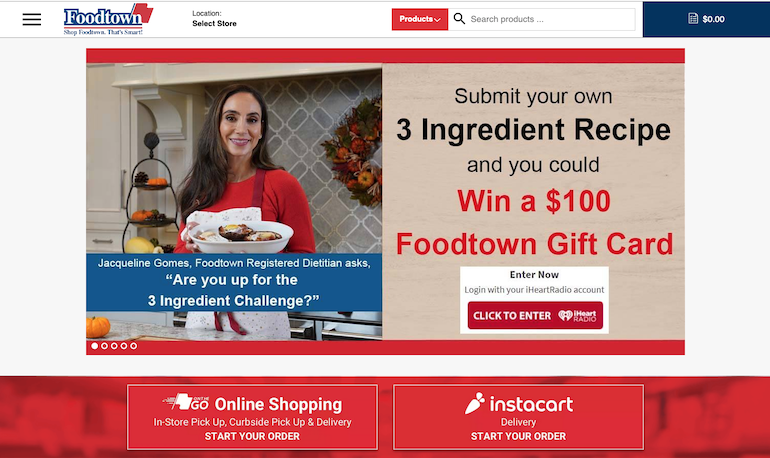 Shoppers also can take part in the Three-Ingredient Challenge by sharing three-ingredient recipes and get the chance to win a $100 Foodtown gift card.

“Foodtown understands better than anyone in the grocery space that making a meaningful impact requires a hyper-localized approach to advertising,” commented Constellation Agency CEO Diana Lee. “Since the campaign launched in September, we’ve seen an average click-through rate well over 1%, an astounding early indication that eye-catching creative put in front of the right audiences can drive powerful results.”

Also participating in the Three-Ingredient Challenge campaign is Foodtown registered dietitian and nutritionist Jacqueline Gomes, who is serving up tips and recipes for quick and healthy meals.

“Recipes don’t have to be complicated. They can be healthy and yummy with ingredients such as salsa and dark chocolate,” according to Gomes. “We hope this will inspire folks to create and share fun, easy recipes and have extra time to enjoy the holidays.”