In Europe, the harvest of strawberries moves north, as Spain closes a bumpy season while other countries begin their production. The Netherlands, Belgium, Germany and England face a slower start to their season, whilst Scotland is unaffected by the colder spells harrowing production in the other countries. North America shows a similar picture, with weather events earlier in the year leading to a later start in California. Meanwhile, in South Africa, growers move towards year-round cultivation, increasing the supply but lowering prices. 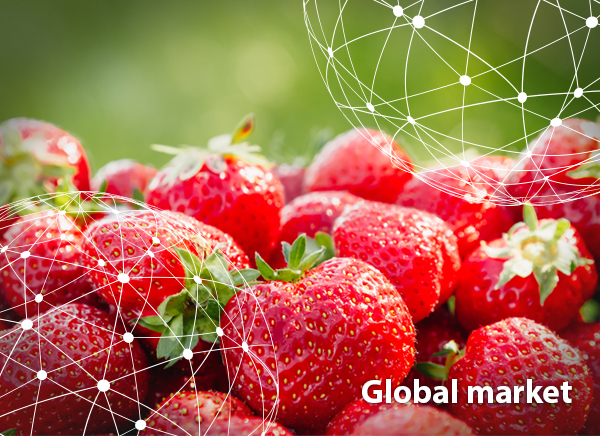 Netherlands: Outdoor cultivation three weeks later than usual
The strawberry market has been very good recently, according to a Dutch fruit trader. “Due to the cold weather, the volumes did not reach the market en masse and partly thanks to all those holidays in May, demand is very good. The outdoor crops are three weeks later than usual, while the greenhouse strawberries have already passed the peak of production. This means there is no peak in the supply and the prices remain stable. Now the prices at the auction are still around 2 euros for a pound, in the week of Mother’s Day we even hit 5 Euro.”

Belgium: Belgian season starts a week later
The Belgian strawberry season started a week later this year than last year. At the beginning of the season, production was a bit slow, due to the large number of dark days in January. Once flowering started, production continued well. The quality of the strawberries is good this year, as the temperatures during the day are not too high and the nights are quite cold. The demand for strawberries is good, but it depends on the weather. Some more sun would stimulate consumption.

Germany: Late start to the season
Due to the cold snap in April and the first half of May, the German strawberry season got off to a slow start. At the moment there are mainly strawberries from covered cultivation on the market, the first open ground strawberries are now gradually coming onto the market. Despite the difficult start to the season, a normal harvest is expected across the board, comparable to the volumes of last year. In addition to domestic product, there are also Dutch, Belgian, Spanish and Greek strawberries on the market. Prices are declining across the board, keeping pace with increasing supply.

UK: Scottish season ahead of English, labor concerns linger
The English strawberry season got off to a slow start and is still running behind schedule due to continued colder than average weather. The strawberry crop is around 10 days behind, while the Scottish season is more on track which may cause oversupply later in the season. At the moment the glasshouse crop is tailing off and volumes are building in the tunnels.

The fruit is looking very good, the cooler temperatures produce good-sized and good-quality berries. Demand is also good due to the shorter supply, with imported Spanish fruit looking a bit tired. The full reopening of the hospitality sector this week isn’t expected to affect retail sales, in fact with overseas travel still limited there will be more staycations which will increase demand.

There have been many concerns about the labor supply in the UK this season, one grower commented that he has enough workers to pick the crop, but it is just another added layer of uncertainty for growers. “It can look like you have enough pickers on paper but until they actually turn up you just don’t know. This year many workers have settled status so it will be relatively easy for them to come back, but the extra paperwork might deter some when it’s easier to go to European countries, but the fact that our vaccination program is going so well may encourage people to come here,” says a producer.

Spain: Demand decreases as Spanish season draws to a close
The Spanish strawberry season is in its last stage. It started late this year due to the snow storms and frosts in December and January, which brought very small yields during the first 3 months of the season. During that period rains damaged the production as well and quality problems forced growers to throw away around 50% percent of their volumes. The demand at that point was above the supply although retailers kept pushing the prices down, looking back to those of the previous season despite the shortage. At the end of March the volumes began to recover the usual levels until the second week of April, when there was already an oversupply.

Although volumes were too high until the 20th of April and prices went down again the sector could handle the situation. From the last week of April the production curve started to flatten and at the same time the cold temperatures in the rest of the European countries – where Spain exports most of its production- delayed the start of their seasons significantly. That had positive consequences for the Spanish exporters that found plenty space for their strawberries in Europe, seeing a much higher demand than usual at that time of the year. Production costs were also higher in that period but were mostly compensated by the good prices. From this week on the strawberry harvests are speeding up in the  European countries to which Spain exports, so the demand of Spanish strawberries is decreasing. Temperatures in Huelva, where more than 90% of the Spanish strawberries are grown, are above 32 degrees, which accelerates the production with lower quality.

Italy: High hopes for Italian season
Excellent situation and good outlook for strawberries in northern Italy. An entrepreneur, who has more than 600,000 plants in production, says that 80% of the strawberries in protected cultivation have been harvested in Emilia-Romagna, while harvesting in the open field has just begun. The quality is excellent. Volumes are adequate, prices are good. Especially abroad, where there is not much Spanish product, prices are keeping high, at around 1.50-1.80 Euro per 500 gram basket. The varieties that are best to eat are those that fetch 1.80-1.90 Euro/500 grams, also thanks to their bright color. The Italian market has slightly lower prices in the retail sector, especially for more acidic varieties.

In Basilicata, the strawberry campaign comes to an end. It has been a very good year for both production and sales, with demand and prices still high. For some varieties, such as Sabrosa-Candonga, the harvest is expected to be completed in about two weeks, while for other cultivars, such as Rossetta and Inspire, the harvest could continue for at least another 20 days. Everything will depend on the rising temperatures, which are currently high.

China: Prices drop by 25%
In May, the domestic strawberry price is 25% lower compared with same period last year. At the moment, wholesale prices are dropping. Fruits from Zhejiang province is already in market for quite a while. The price is around 10 yuan/kg. Fruits from Yunnan province just launched the market, with 20 yuan/kg. Most strawberries in China are planted in plastic greenhouses.

North America: Domestic strawberry supplies catching up with better weather
Like many commodities in California, strawberries are contending with recent weather events. “Weather has played a significant role in this year’s domestic strawberry season,” says a grower from the region. “Southern California strawberry growing areas began their season on time. However, they experienced several weather events including severe rain, hail and high winds of which caused significant setbacks to the harvest.”

There are two regions currently growing strawberries in California. Santa Maria is seeing peak supplies and will continue with high volumes of good-quality berries for the next three weeks. Meanwhile growers in Watsonville/Salinas are having a hard time building momentum due to weather. “The plants did not receive ideal chill time during the winter. Combined with wet and colder spring temperatures, the fruit has yet to ripen up as compared to timing of previous years.”

Overall, compared to recent years, the Watsonville/Salinas growing area is approximately 30 percent behind in volume and running approximately three weeks behind schedule. “However, the plants are healthy and loaded with flowers and green fruit. We’re starting to see the onset of the peak and expect a very large haul of fruit to come on by the first of June, which will make up for lost time and volume in the end,” according to the grower, who adds that this is when supplies will move into promotable volumes. “The last week of May through end of June is expected to produce an overall peak supply window for the California strawberry season.”

These supplies are meeting particularly strong demand from all over the U.S. and Canada. “In particular, we see foodservice in the southeast of the U.S. — Texas, Florida, Georgia — making a strong come back and we’re expecting quite a few other states to follow suit.”

Because of these lower than normal supplies so far, prices have been historically high for the popular fruit. However, those prices are beginning to fall now. “The USDA strawberry average was $16 per 8 1lb. tray last week and now is around $7 per 8 1lb. tray which is where we need to be because of the large amount of volume we expect in June. We need the right retail prices to move through to the consumer.”

Looking ahead, with Memorial Day around the corner, a popular strawberry-associated holiday, promotional supplies of good-quality berries will be ample.

In the Western Cape growers are increasingly cropping 12 months of the year, and consequently they’re still in the market, with growers from Gauteng and Limpopo. Although strawberry prices are high, R100 (5.8 euros) to R120 (6.9 euros) per kilogram, the season is still early and volumes are going to pick up a lot and prices will drop quickly, market agents say. With increasing local production, Egyptian imports were reduced this year.

Last year was an exceptional year for strawberries quality-wise and if rain stays away in the north, this year could be the same. The crop will be larger as a result of said expansion.