Heavy rains in Limpopo during January and February have caused havoc in the tomato industry in recent weeks – but by diversifying its supply chain, and partnering with innovative suppliers like Red Baron, the Shoprite Group was able to keep tomatoes on its supermarkets’ shelves.

Red Baron is an owner-managed tomato farm that has supplied the Group’s supermarkets for several years, and their ability to keep operating during this year’s shortage has been a boon for the company, which reported record sales in March and April.

The farm’s East London location, far from the more traditional tomato growing regions of South Africa, has been central to its recent success – and their use of greenhouses and hydroponics only further reduces the risk of climate change and maximizes output to supply retail chains.

Plants on the Red Baron farm get fed 8 to 10 times per day with between 100 and 200ml of water, depending on temperature, wind, and age of the plant.

Although this high-tech hydroponic approach is not without complexities, like high startup costs, little margin for error when it comes to irrigation and disease control, and being both labor and management intensive, it’s far more efficient when it comes to land and water use. 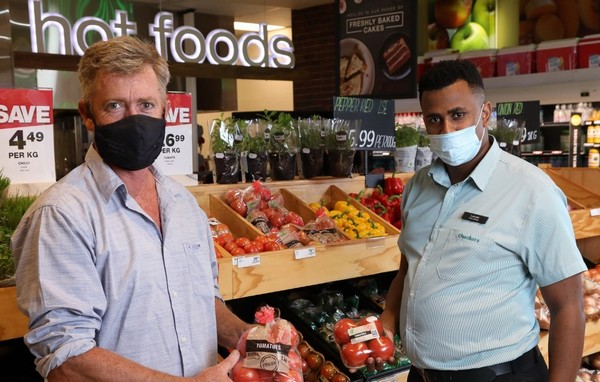 Andrew Emslie, from Red Baron in the Eastern Cape, in-store with Luvuyo Mpontshane.

“In one year we look to produce 360 to 400 tons of tomatoes in a single hectare of hydroponic greenhouse. Field grown tomatoes get only about 50 tons a hectare,” explains Emslie.

This approach also reduces the impact of changing weather conditions – the plants in these plastic-covered greenhouses are protected from wind and rain, and to a certain extent the cold. At the same time, it also significantly reduces the need for crop protection chemicals.

By partnering with the Shoprite Group, which provides a growing program with weekly estimates of the amount of product they require for the year ahead, Red Baron has been able to further grow its business.

The company is expanding the size of its “under protection” greenhouse operations and has increased the number of permanent employees from 60 to over 100. Many of these new employees are also coming through the Shoprite Group’s YES initiative, and the farm has created 50 permanent positions through the program.

Emslie says Shoprite’s involvement in owner-managed agriculture initiatives like these is critical to the country’s farming industry.

“It’s great that a corporate has chosen to get involved in grassroots agriculture – it’s helped us maintain and grow our business, thereby and it’s also creating jobs, which the country desperately needs right now,” says Emslie.

Supporting small suppliers in various regions, including those who use systems like hydroponics to improve yields and protect crops, is also beneficial to Shoprite and its customers as the quality of produce and continuity of supply is enhanced.