To help reduce plastic and other waste, West Coast grocer New Seasons Market and its New Leaf Community Markets subsidiary plan to phase out single-use bottled water at all stores by Earth Day.

Sales of still water in capacities of one liter or less and bottled in single-use plastic, fiber, aluminum or glass containers will be discontinued by both banners starting April 22, Portland, Ore.-based New Seasons said Tuesday. With the move, the retailer will prevent more than 250,000 single-use bottles from entering the waste stream annually. 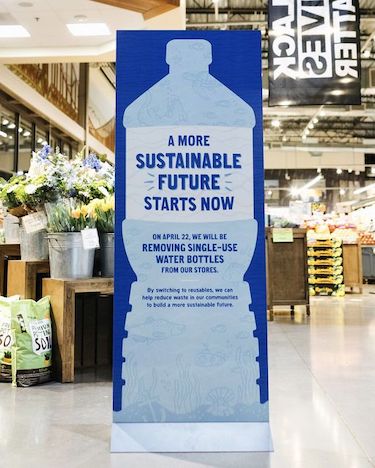 Both New Seasons and New Leaf will continue to sell larger sizes of still water in the grocery department and single-serve bottles of sparkling and flavored water, the company said. Stores also will continue to offer one refillable, single-serve bottle of still water from Pathwater, a Fremont, Calif.-based vendor selling locally sourced, purified water in specialized, refillable aluminum bottles.

A selection of reusable water bottles also will be available in the home goods aisle, the retailer added.

“Combined, beverage bottles, caps and lids make up the second most-common form of ocean litter. By committing to using reusable bottles, we can remove over a quarter million single-use plastic, aluminum and glass bottles a year,” according to Athena Petty, senior sustainability manager at New Seasons Market and New Leaf Community Markets.

“We’re starting efforts with still water in containers one liter or less because opting for reusables is an easy individual choice to help lessen our collective environmental impact,” Petty explained.

Under their sustainability initiatives this year, both banners will continue to award Neighbor Rewards loyalty program members with 10 bonus points when shopping with reusables, New Seasons said. Members also can sign up to receive e-receipts and save paper; the retailer noted that receipt paper isn’t recyclable. 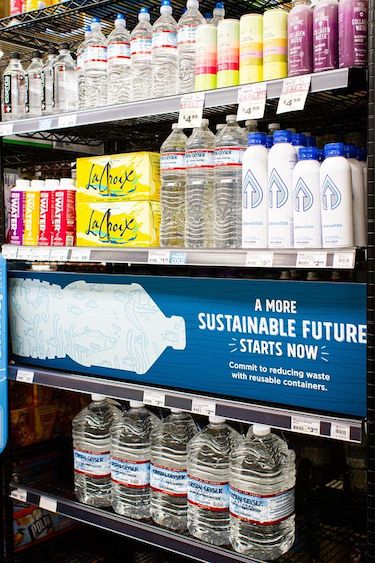 New Seasons and New Leaf, too, have set a goal to cut down operational waste at their stores by achieving a 57% landfill diversion rate. The company said both banners also aim to lower energy use by 5% per revenue dollar. In addition, store departments at New Seasons are exploring packaging improvements, such as switching to lighter-weight or reduced-footprint packaging on bulk tubs, half-pie clamshells, grab-and-go items and produce.

Both banners, which operate independently as certified B Corporations, were acquired in early 2020 by Good Food, a holding company with three other food retail chains: Bristol Farms and Lazy Acres Natural Market in Southern California and Metropolitan Market in Seattle. Hypermarket retailer Emart, which operates about 200 stores in South Korea, acquired Good Food Holdings in 2018 and is part of Seoul-based global retailer The Shinsegae Group.