A traditional fruit farm. That’s how Kees van Ossenbruggen describes his Dutch top fruit company. He runs it along with his siblings, Jan and Jetty. A visit to their premises gives you a good idea of what goes on behind the scenes. Last year, Van Ossenbruggen Fruit expanded its existing premises. It added a modern 5,500 m2 office and sorting and packaging area. The company now has state-of-the-art cooling and packaging facilities. So, it can provide its customers with Dutch apples and pears all year round.

“We thoroughly considered routing and functionality beforehand. If you’re clear about what you want, there’ll be no surprises afterward. Everything works perfectly. The building was constructed with the future in mind,” says Kees. They added a new Greefa sorting line. It sorts both internally and externally. It and the existing packing line stand in the new warehouse. Dutch Filtration took care of the water purification system, complete with underground pipes.

Another unique feature is the container store at the back of the building. This spans no less than 50m in width, with no central columns. You can see the new office with facilities and sanitary areas from the front of the building. The first floor houses a large meeting room with a balcony. From there, you have an expansive view of the farm’s orchards. 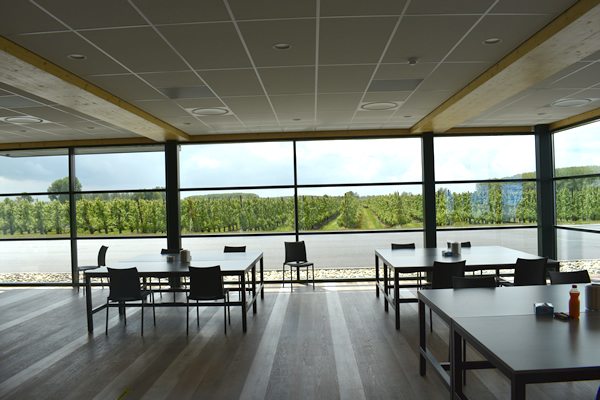 “We’ve always combined cultivating, trading, storing, sorting, packaging, and marketing top fruit. That works perfectly for us. Firstly, we know exactly what’s going on in the cultivation. And secondly, our retail clients appreciate the advantage of buying directly from the source.” Van Ossenbruggen’s 90 hectares of own production is neatly divided between apples and pears. They grow varieties like Elstar, Jonagold, Conference, Lukassen, Triomphe de Vienne, and Gieser Wildeman.

The company not only grows its own fruit. It also buys plenty of fruit from the tree. That’s to have a buffer during the season. Van Ossenbruggen sells most of its apples to the local market. Their pears go all over Europe, especially to the retail chains. “In our 58 cells, we can cool ten million kg of fruit,” says Kees.

“This year, for example, we’ll have Dutch Elstars until at least mid-July. This makes us an ideal retail sector partner. Farmers are producing 110 to 130 million kg of Elstar. So, let’s face it, this variety is the number one apple in the Netherlands. We’re proud of that. That’s why we’d have liked to see a follow-up to the ‘Elstar, always a hit’ campaign.”

Van Ossenbruggen has been focusing its sales on the retail chain and the modern wholesalers for 25 years. Its own products have been PlanetProof certified for four years now. “We didn’t have to change much for that. We’ve been using flower strips, insect hotels, and low-emission spraying for years,” explains Van Ossenbruggen.

“So, we already met the standards. The produce we buy from other growers is also PlanetProof-certified wherever possible. Though that remains each grower’s decision, of course. We do point out to the farmers that they must provide a ‘certificate of guarantee’ with their product.”

Kees is optimistic about the fruit company’s future. “We have an advantage in this part of the country. We have access to surface water for irrigation. And the soil’s always been very suitable for fruit growing. It is up to us to grow an honest, sustainable product that consumers trust. Then they always put Dutch fruit first. After all, if the European harvest’s large but the quality’s poor, we all suffer. We must grow a reliable product that meets people’s wishes. I’m sure we can increase Dutch top fruit consumption then.” 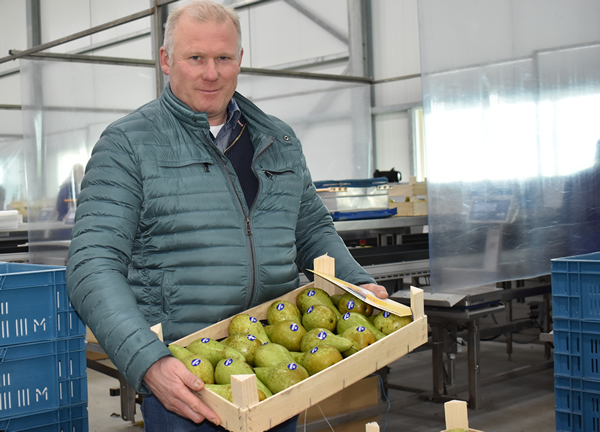 “That’s why it’s such a pity that there are so many Elstar and Jonagold variants,” Kess continues. “They often look good, but sometimes the flavor leaves something to be desired. We can’t afford that. We focus on cultivating Elshof Elstars. There was a vast difference in apple quality this season. Those from the unprepared lots were of much poorer quality. Pears have had good quality so far.”

Kees is also optimistic about the new season. “I had a walkabout this week. Despite the cold and wet spring, the buds and flowers look strong. But we depend on the climate. Night frost, drought, and sun damage, but also bacteria blight, the pear psyllid, and scale insects remain serious threats. Nevertheless, we manage to deliver Elstar until July and Conference all year round. We can’t control everything. But by growing, cooling, sorting, packing, and selling, you keep the chain under control,” Kees concludes.