In general, trading was fairly quiet. Although availability was limited, it was sufficient to satisfy the steady demand. Prices did not change significantly. Here and there, slight volume-induced price increases were recorded. In Berlin, extensive returns from food retailers arrived: South African Flamingo affected regular business. 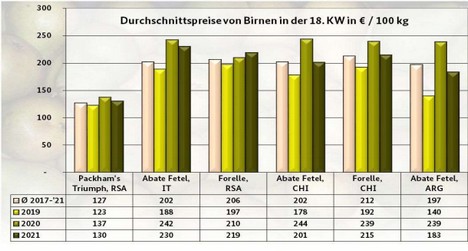 Apples
The presence of the dominant domestic products was obviously limited. Interest was nevertheless satisfied without difficulty, as it had diminished a little, in parallel with the supply.

Table grapes
The deliveries were limited, all in all. However, since demand had also decreased, traders rarely had to modify their previous calls.

Strawberries
Domestic fruits gained strongly in importance and, together with Dutch items, formed the basis of the assortment.

Lemons
Spanish primofiori dominated and were only selectively completed by Italian and Turkish imports. Availability was sufficient to satisfy the demand.

Bananas
For the most part, ripeners sufficiently matched their supply to accommodation. As a result, prices often remained at their previous levels.

Lettuce
The season of Spanish iceberg lettuce slowly entered its home stretch: Deliveries were noticeably reduced. In some cases, they were no longer sufficient to satisfy interest. Quotations trended upward.

Cucumbers
Local, Dutch and Belgian snake cucumbers predominated. The quality usually left nothing to be desired. No clear line was discernible in terms of quotations.

Tomatoes
A very extensive and varied assortment was available. Central European batches now clearly dominated the action. Spanish, Turkish, Moroccan and Italian deliveries had restricted themselves and locally said goodbye to the trade.

Sweet peppers
Dutch deliveries dominated the scene ahead of Turkish and Spanish. Availability grew and the high quotes of previous weeks were a thing of the past.

Asparagus
After clearance had not always been successful in the previous week, the accumulated stocks had to be sold off first. As a rule, this was only possible with noticeable discounts, which the traders had to grant.