The Atlantic waters on the southern side of Tobago can be rough even for seasoned sailors. But early that morning the sea seemed normal, with the sunlight shimmering off the rippling dark blue surface, promising brilliant weather and a good day’s catch.

As the group of experienced fishermen continued casting their lines from their traditional low boats, pulling in fat mahi mahi, wahoo and other bounty, they noticed the unusual white pirogue drifting unmanned nearby.

It stood out, immediately, for the different curved profile with a sharp, higher bow – and for the dolphins and other fishes strangely drawn to the vessel, four miles off the coast of Belle Garden, a scenic village in the smaller of the twin-islands that also has beautiful beaches.

Word travelled quickly in the close-knit community, and other boat operators sped out. One cautious veteran exclaimed, “Oh, my God!” as he drew near enough to see the sole symbols, A4231 or AG231, and to discern the stench. Shouting to each other, they observed, “we have dead men over deh” even as another superstitious fisherman declared, “I don’t want to see no dead people.”

In the unwritten code of the trade, the crew of “Big Thunder” knew what had to be done as the first part of a very grim task. Unlike the earlier perplexing incident in Guyana last February, they towed the barnacle-encrusted boat without a name to the nearby bay, where a backhoe pulled it out to shore at the fishing port. Investigators would eventually determine there were 14 bodies plus skeletal remains, of unknown men believed to be of African descent, dressed in dark sweat-shirt-type clothing and “greenish” rain capes.

‘We can’t find the boat’

On February 14 last, the Guyana authorities announced the shock discovery of several bodies in a small, green, riverain boat floating about 75 miles offshore Georgetown. A supply vessel MT20, contracted to work with the American oil behemoth ExxonMobil stumbled across the vessel. Officials had asked for help to tow the boat in that night, but the crew was reportedly unable to do so, as the conditions deteriorated.

“The second request was for them to stay and keep an eye on the boat while we seek to mobilise other assets and resources…” but they lost sight of it, due to the deteriorating weather, the Public Works minister Juan Edghill later said. He admitted “we can’t find the boat,” despite extensive sea and air searches. 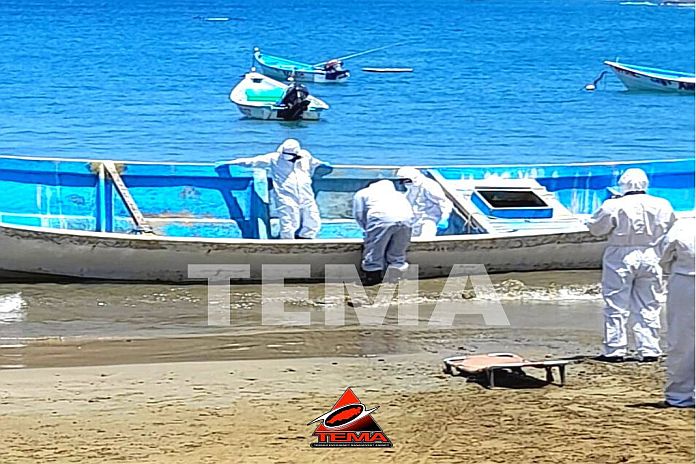 Weeks later, across the region, Nicaraguan officials confirmed finding the bodies of at least six people, believed to be illegal migrants, in a different boat floating off its Caribbean coast. The interior ministry said a Republic of Guinea passport belonging to a 31-year-old man was found on one of the bodies. The passport had no Nicaraguan entry stamp in it.

The Belle Garden discovery on Friday, May 28 last, prompted speculation in Trinidad and Tobago that the vessel, allegedly reported stolen in Mauritania, was the same one that went missing in Guyana, but the size, colour and shape are all different. Yet, the catastrophe has gripped the imagination of a national and regional population, in lockdown and under curfew, already reeling from record daily deaths due to the COVID-19 pandemic.

We may surmise from the jumble of plastic bags, scattered shoes and worn ropes remaining in the mystery boat, as pointing to an ongoing tragedy that is magnified by the killer virus, starting with the migrant’s dream of simply wanting a better life in another continent, far across the treacherous ocean that brought many of our ancestors to the Caribbean.

Before last week, we knew little about Mauritania, some 3 000 miles away. Senior police officials recently disclosed that the vessel was traced to the sprawling and dry north-western state in Africa, officially named the Islamic Republic of Mauritania, a former French colony, 90 percent of which lies north in the Sahara, the world’s hottest desert.

Prone to frequent coups and periods of authoritarian military rule, it was only in 2019 that president Mohamed Ould Ghazouani’s victory following elections, became the country’s first peaceful transition of power since independence in 1960.

Bordered by the Atlantic Ocean to the west, Algeria to the northeast, Mali to the east and southeast, and Senegal to the southwest, Mauritania is merely another strategically-sited place to pay unscrupulous smugglers large sums of about US$2,000 each, to launch a dangerous sea voyage to the Spanish archipelago and Europe.

Fleeing economic hardships, conflict and violence, asylum seekers continue to attempt the risky journey, with unknown numbers dying, and others disappearing forever. Just last month, the world learnt of the case of the extraordinary 17-year old migrant girl from the Ivory Coast, Aicha, who was one of only three people to survive a harrowing 22-day crossing from Mauritania.

She was spotted by Spanish rescuers, in a similar designed vessel like the boat found off Tobago. The teenager left her hometown in November 2020 according to a recent BBC video report. Aicha only told her older sister she was hoping to make it to Europe when she travelled to Mauritania, and then boarded a wooden boat to cross the Atlantic Ocean towards the Spanish Canary Islands, in April.

Last year, more than 23,000 people arrived on the Canary Islands from the West African coast, and figures for the first four months of this year, “show that trend accelerating,” the BBC said. According to one Spanish group, nearly 2 000 people died attempting the Atlantic crossing last year, making that route to Europe among the deadliest, the website Infomigrants related.

After more than three weeks at sea, most of the 59 people on Aicha’s boat, with no shade or shelter, had died. About two dozen bodies remained on board. Journalist Bruno Boelpaep interviewed Sergeant Fernando Rodriguez who recalled: “As we started descending, looking at it, you could tell it wasn’t good. It was like a mass grave in the middle of the sea.”

The three survivors could hardly move. “One woman was crying, but she had no tears left,” a rescuer told Boelpaep. Aicha explained that after two days they had run out of food and water. “On the fourth day there was no more petrol.”

A shoe of seawater

Aicha wept as she remembered: “There were men who could no longer stand up and who screamed out of thirst. ‘Please, please,’ they begged, ‘I need to drink water, can someone please give me water?’” In desperation, the others tried to dip seawater using a shoe, their only container.

‘What I left behind’

The saga of the boat that ended up in Tobago is still being unravelled, but the ordeal those victims endured is echoed in other heart-breaking stories from the sea. One traveller, Samba, who is now resident in Niger, recorded his tale in the “I am a Migrant” online series.

He said: “I left Mauritania almost a year ago to go to Europe. What pushed me was the desire to study and help out my parents. I want them to be happy. It makes me sad when I think about what I left behind. I spent almost two months in prison in Libya. They beat us, tortured us, shot at people. I had no contact with my family so they all thought I was dead. It was really hard on all of us.”

Samba recounted: “Some brothers made some money, some didn’t, some were left behind in the Sahara, while others drowned. On my way back, I saw people that had done 10 days in the Sahara with barely any food or water. There were a few dead among them. It was a sad thing to see. I left Mauritania for Europe, but I wasn’t prepared for what I saw on the road.”

“At the end of the day, we are responsible for everything that happens to us. They told me not to go, but I went anyway. Man’s biggest problem is man himself.”

*ID is counting her many blessings. She is happy to learn that Aicha has recovered physically and is learning Spanish. The teenager can stay in Spain legally, only until she turns 18.