The “postcode lottery” of micronutrients in crops When it comes to getting crucial micronutrients from crops, it really does depend on where you live. That’s according to new research conducted by a team of universities from the UK, Ethiopia, and Malawi. 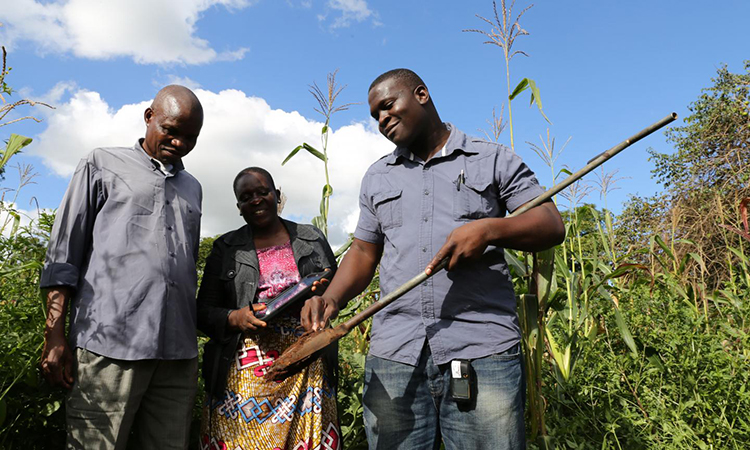 Soil samples, like this one being taken in Malawi, were a crucial part of the study Credit: University of Nottingham

The amount of micronutrients people get from the crops that they eat is a type of ‘postcode lottery’ according to new research that has analysed thousands of cereal grains and soils as part of a project to tackle hidden hunger in Malawi and Ethiopia.

A global team led by the University of Nottingham and its Future Food Beacon including academics and researchers from Addis Ababa University (AAU) in Ethiopia and Lilongwe University of Agriculture and Natural Resources (LUANAR) in Malawi, working on the GeoNutrition project, have discovered more about the relation between soils, crops and micronutrient deficiencies among people living there. Their findings have been published today in the journal Nature.

The team analysed the grain of more than 3000 cereal crop samples from farmers’ fields in Ethiopia and Malawi. They found that the amount of the dietary micronutrients calcium, iron, selenium, and zinc in the cereal grain varied substantially with location, with some areas showing much lower levels of micronutrients than others. Some cereal types, such as millets, are more nutritious than others, such as maize. However, whether deficiencies are likely in an area also depends on its soils and landscapes.

Micronutrients include the vitamins and minerals which the body requires from the diet in small quantities, for a range of functions. Micronutrient deficiencies, also known as hidden hunger, are common globally, affecting more than half of children younger than five years of age, especially where access to sufficient food from plant and animal sources that are rich in micronutrients is limited for socioeconomic reasons. Micronutrient deficiencies pose a serious risk to human health, including the growth and cognitive development of children and susceptibility to infectious and non-communicable diseases.

This research shows that location is intrinsically linked to the nutritional quality of diets. Getting enough micronutrients is a type of ‘postcode lottery’ with nutritional value varying by location. This will particularly affect rural households who consume locally sourced food, including many smallholder farming communities where location may even be the largest influencing factor in determining the dietary intake of micronutrients.

“It is important to have good quality evidence on the nutritional quality of diets if we are going to support public health and agriculture policies to improve peoples’ health and wellbeing. Mapping the quality of diets is an important part of this evidence,” said Martin Broadley, Professor of Plant Nutrition in the School of Biosciences and a contributor to the Future Food Beacon, who led the study.