The reimagining of the salad bar While sales had been declining in the years before the pandemic—largely due to the rise of fast-casual salad chains such as Sweetgreens—salad bars continued to bring in significant revenue. In the year before the shutdowns, according to Chicago-based market research firm IRI Integrated Fresh, total US multioutlet dollar sales for the deli salad bar category totaled $436 million and volume sales reached 63 million pounds.

However, in the year ending March 21, 2021, sales totaled just under $27 million. This is a 94% drop from the previous year. Volume sales plummeted 93%. To withstand the self-serve shutdowns, many grocery retailers stocked salad bars with premade grab-and-go salads or used salad stations as display cases for packaged goods from other areas of the store.

In early November last year, Coborn’s of St. Cloud, Minn., deployed a trio of Sally the Robot devices to fill the salad bar gap in select stores. Similar in size to a vending machine, Sally assembles and dispenses customized salads at the touch of a large-format video interface—or a mobile app. Created by Hayward-based Chowbotics, Sally is finding a home in grocery stores nationwide. 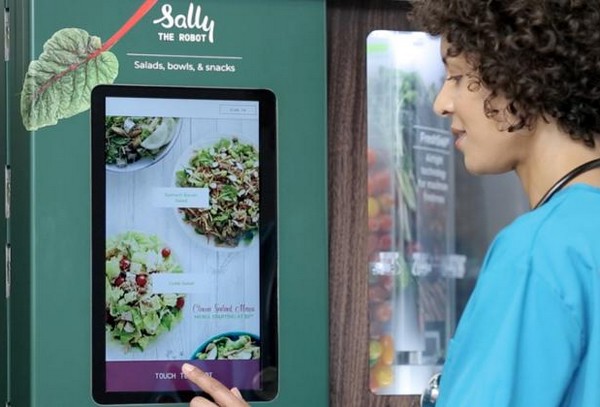 “Having to shut down our salad bars during COVID, we wanted to leverage new technology to give guests a similar experience in a safe environment,” Josh Croson, director of deli for Coborn’s, told winsightgrocerybusiness.com. “Sally allowed us to do that by being a fully self-contained unit to protect the product, while allowing the use of a mobile app to minimize contact.”

While it has taken some time for customers to get accustomed to Sally, feedback has been largely positive. Some people have even traveled out of their way to see the salad-making robot in action. “This is something that really hasn’t existed in the market before,” Croson says, “so ensuring that people are comfortable using the machine and understanding its capabilities is huge.”