Top central banks go their own way into stimulus exit Britain became the first G7 economy to hike interest rates since the onset of the pandemic on Thursday, with the US Federal Reserve also signalling plans to tighten in 2022 but the European Central Bank only slightly reining in stimulus.


The different paths taken by major central banks underline deep uncertainties about how the fast-spreading Omicron variant will hit the global economy and their differing views on stubbornly high inflation and cross-border supply chain snags.

They also reflect the uneven impact of the pandemic on the world’s top economies. Fed Chair Jerome Powell on Wednesday forecast the United States was heading towards full employment come what may — a far-off prospect for most European labour markets.


Bank of England policymakers raised the benchmark Bank Rate to 0.25 per cent from 0.1 per cent, confounding economists’ expectations that it would stay on hold, saying that inflation was set to hit 6 per cent in April, three times the BoE’s target level. 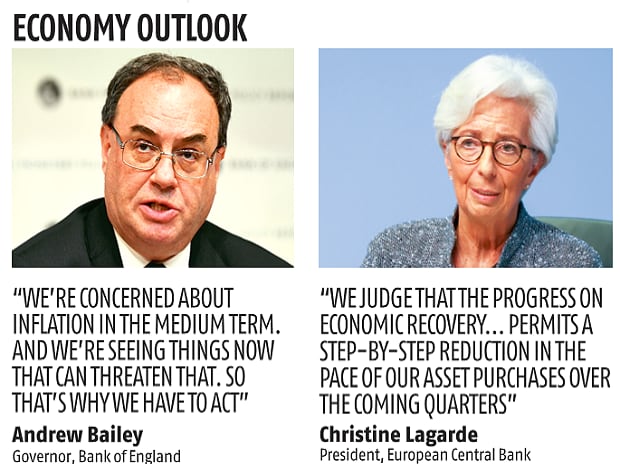 Governor Andrew Bailey said Omicron was already hurting retailers and restaurants but the BoE had felt compelled to stop the recent jump in prices from becoming a longer-term problem. “We’re concerned about inflation in the medium term. And we’re seeing things now that can threaten that. So that’s why we have to act,” Bailey said.


UK daily coronavirus infections are at their highest since the earliest days of the pandemic, forcing Prime Minister Boris Johnson this week to impose new restrictions.


A first read-out of the UK Purchasing Managers’ Index (PMI) for December on Thursday showed Omicron had already hit British hospitality and travel firms — a day after data showed consumer price inflation at a decade-high.


The ECB, which has undershot its inflation target for most of the past decade, meanwhile kept interest rates on hold and announced the end of its pandemic emergency asset-buying scheme next March.


But the euro zone central bank promised copious support as needed via its long-running Asset Purchase Programme, confirmed its relaxed view on inflation and signalled that any exit from years of ultra-easy policy will be slow.


“The Governing Council judges that the progress on economic recovery and towards its medium-term inflation target permits a step-by-step reduction in the pace of its asset purchases over the coming quarters,” it said in a statement.


The European Central Bank raised its inflation projections on Thursday but cut its 2022 growth outlook as the Covid-19 pandemic and supply chain disruptions slow the euro zone’s economic recovery.


The Bank of Japan is due to announce its policy on Friday. With consumer-level inflation remaining largely absent, only a slight reduction in corporate asset purchases is under discussion at its meeting.


The Fed on Wednesday doubled the pace at which it will cut bond purchases, while forecasts from its policymakers signalled as many as three interest rate increases next year.


Turkey’s central bank cut its policy rate again as expected by 100 basis points to 14 per cent on Thursday despite inflation soaring above 21 per cent, sending the lira to a fresh record low. The lira touched a low of 15.689 after the move, before trimming losses to 15.5 by 1151 GMT. The dollar has more than doubled in value against the lira this year, rattling Turkey’s big emerging market economy.


The central bank’s 100 basis point rate cut, in line with the forecast in a Reuters poll, brought its cumulative easing since September to 500 points, making the local currency even less attractive to investors. The bank signalled it would pause the easing cycle to monitor its effects in the next three months.


Erdogan’s new economic plan prioritises exports and lending, even though economists and opposition lawmakers have widely criticised the policy as reckless. With inflation soaring above 21 per cent, Turks’ budgets are straining and anxieties are building. The central bank has intervened four times in the currency market in the last two weeks, selling dollars to slow the lira sell-off and eating into its already depleted foreign reserves. (Agencies)

(This story has not been edited by Business Standard staff and is auto-generated from a syndicated feed.)