Unemployment is falling in rich countries, but not every job is coming back Companies are hiring and unemployment is falling across most advanced economies on hopes that vaccines will eventually contain the Coronavirus. But not every job is coming back.


The pandemic has pushed out older employees and is deepening inequality as lower income workers feel the brunt of the crisis. Economists warn that there’s still a way to go before global employment is back to where it was before the pandemic.


A resurgent US job market is creating more opportunities at a faster clip than many economists and employers expected. Nonfarm payrolls rose by 916,000 in March, blowing away economists’ median estimate of a 660,000-job gain. But there are gaps. There are still nearly 2 million fewer US women in the labor force than before Covid. Black women in particular are falling behind other groups in job gains. Bloomberg Economics sees US unemployment dropping below 6 per cent in the current quarter then heading toward 5.1 per cent in the fourth quarter before falling to 4 per cent at the end of 2022. Japan’s resilient employment is masking underlying weakness. The proportion of available jobs is still sharply down from pre-pandemic levels, reflecting weak hiring in hotels, restaurants and bars. The unemployed are outnumbered by people furloughed or on leave, and the number leaving the working force altogether is rising. Bloomberg Economics expects Japan’s jobless rate to rise to around 3.0 per cent in the second quarter as renewed virus-containment measures hits the services sector. 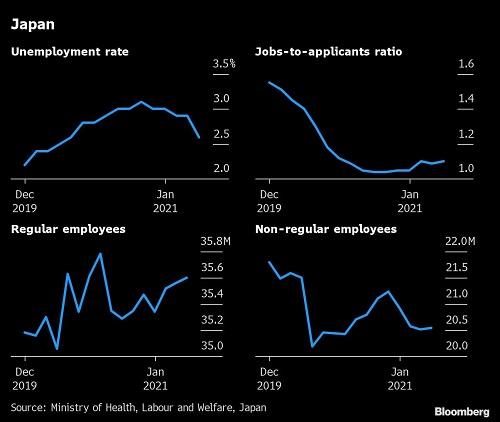 German employment has been more resilient than in other European countries due to a greater reliance of the economy on manufacturing even as thousands of businesses remain affected by recently-extended pandemic restrictions. Yet many businesses are strained by nearly six months of lockdowns, and the labor market has a long way to go before a full recovery. Bloomberg Economics expects Germany’s unemployment rate to fall to 4.2 per cent in the fourth quarter and to be at 4 per cent at the end of 2022. 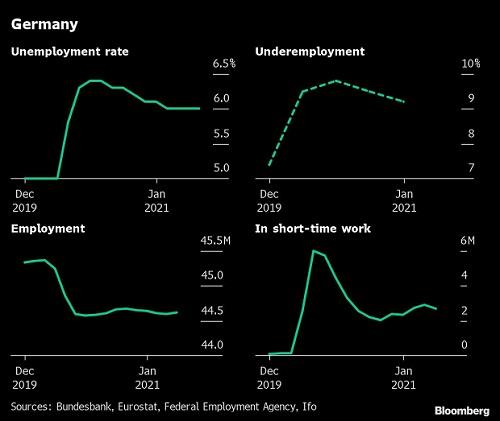 The UK labor market weakened unexpectedly in March as company payrolls fell for the first time in four months and more people dropped out of the workforce. Long-term youth unemployment has been highlighted as a particular concern. Overall employment remains about 800,000 below where it was before the pandemic struck. Bloomberg Economics expects UK unemployment to peak at 6 per cent in the fourth quarter before declining to 4.8 per cent in the final quarter of 2022. 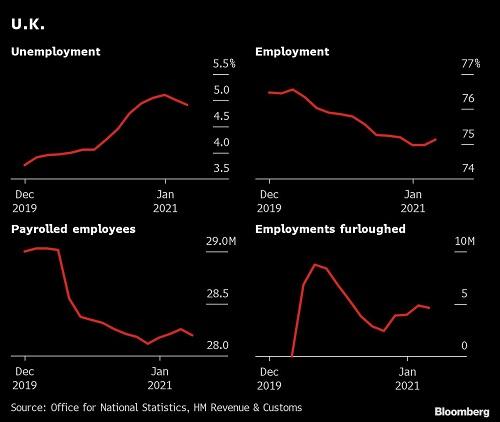 While the number of job-seekers in France has declined from an all-time high in the first lockdown, the count remains above pre-crisis levels and around two million people were still on the short-term working scheme in February. A surge in registrations for training suggests French workers are anticipating fundamental shifts in the labor market. Bloomberg Economics expects France’s unemployment rate to rise to 8.3 per cent in the third quarter before declining to 8.0 per cent in the fourth quarter of 2022. 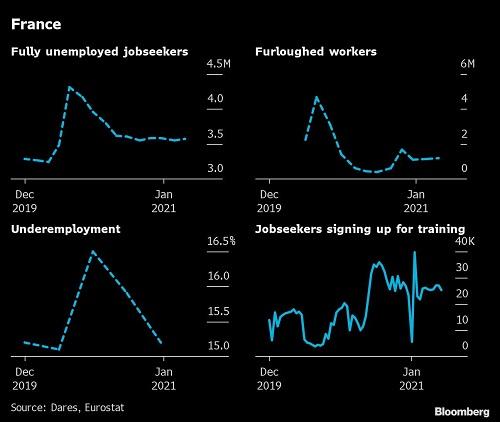 Italy has lost about 896,000 jobs since the start of the pandemic last February. It was one of the first countries hit by the virus with harsh lockdowns that caused economic output to shrink almost 9 per cent last year. The unemployment rate declined to 10.1 per cent in March from 10.2 per cent a month earlier. Women and the young and the services sector remain the most damaged from pandemic fallout. Bloomberg Economics expects Italy’s unemployment rate to fall to 9.4 per cent in the fourth quarter before declining to 8.9 per cent at the end of 2022. 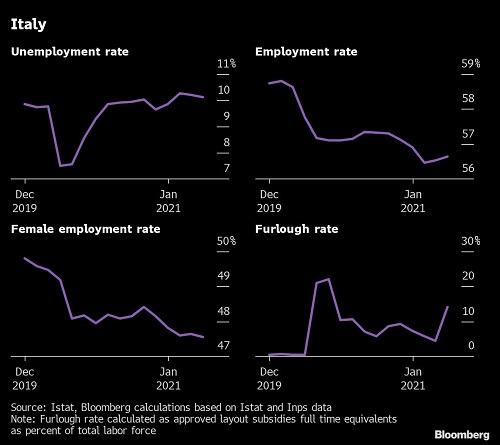 Canada’s economy has recovered about 90 per cent of nearly 3 million jobs lost during the first wave of the pandemic, versus just over 60 per cent in the US For months, the data have shown a rebound that has surprised even the most optimistic analysts — a resilience that forced the Bank of Canada to be the first major central bank to signal its intent to reduce emergency levels of monetary stimulus. Bloomberg Economics expects the jobless rate to fall to 6.7 per cent in the fourth quarter of 2021 and then to 5.9 per cent in the fourth quarter of 2022. 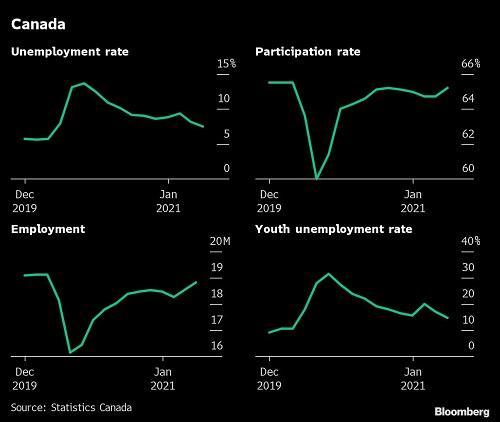 South Korea’s jobs market has just started to recover but much of the increase is being driven by temporary and daily workers — employment and labor force participation remain well below pre-Covid levels. Wage growth remains subdued and youth unemployment remains the highest among all age groups while hiring for those aged 60 and above has been the least impacted throughout the pandemic. Bloomberg Economics expects South Korean unemployment to average about 4 per cent this year. 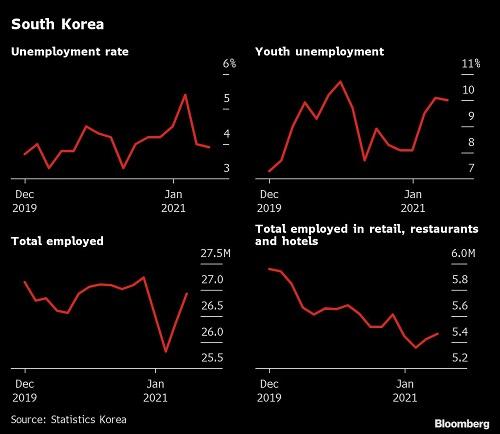 Australia is one of the first nations to regain all jobs lost through the pandemic, reflecting a successful early suppression of Covid-19 and a massive fiscal-monetary shot that’s sent the economy roaring back. Participation is at record highs and the unemployment rate is moving quickly in the right direction. But wages growth is sluggish and while underemployment has fallen, there’s plenty of people that want additional hours. Bloomberg Economics expects the decline in Australia’s unemployment rate will slow over the second half of 2021 and doesn’t see the unemployment rate dipping below 5 per cent until 2024. 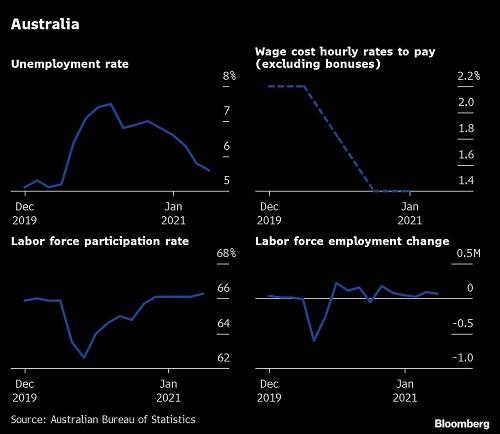 
“The beginning of a rapid recovery in the US, and furlough schemes keeping workers attached to jobs in Europe, mean the labor market landscape is not as bleak as it could be,” said Tom Orlik, Chief Economist of Bloomberg Economics. “Still, with the pandemic accelerating the ‘Amazon-effect’ shift from small, labor intensive firms to their bigger, tech-savvy rivals, the path back to full employment will be arduous.”