To keep up with growing consumer demand for strawberries, US fresh strawberry production has increased over the last two decades (from 2000-19). In the United States, fresh strawberries are primarily grown in California (roughly 90 percent annually) and Florida (about 8 percent), followed by New York, North Carolina, Oregon and Washington.

With the development of newer varieties, strawberry season has expanded in both California and Florida. California produces strawberries year-round with peak harvest spanning from early spring until fall. 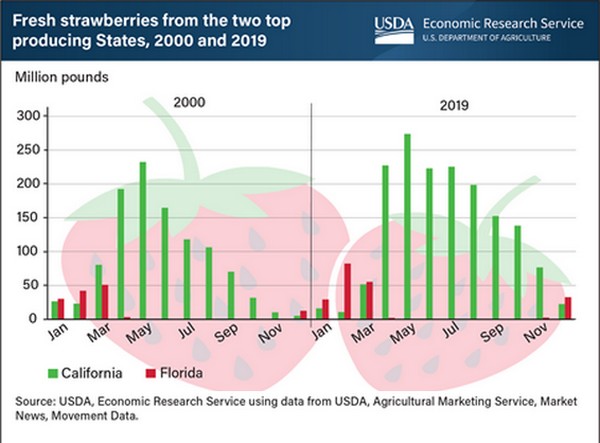 California production has now increased from July to October with higher yielding varieties on decreased acreage, and shipments were 220 percent higher in 2019 than in 2000. Florida’s strawberry season typically begins in December and goes through March, but with the use of an early yielding variety, the Florida strawberry season now begins in November with relatively small volumes.

Florida’s strawberry shipments more than doubled between 2000 and 2019. From all locations, strawberry supplies in the United States typically begin to rise in the spring, which is the perfect season to pick strawberries since National Pick Strawberries Day is on May 20.