Uzbekistan cherry exports to Singapore; how sustainable is it? It is very obvious that the export of cherries outside post-Soviet countries allows growers to get a higher price than when it is supplied to Russia or Kazakhstan, which means that both large and small farmers can increase their income.

News on the export of Uzbek cherries to Singapore do not report the volume of delivery, however, it is most likely to be air delivery, which can range from 1 to 3 tons. Uzbekistan exported the same volumes of cherries to Malaysia, Thailand, Great Britain, Norway and Oman in previous years. However, they did not have any significant impact on the market. Nevertheless, these exports are very important for the country’s image and further promotion of Uzbek cherries in these markets. No less valuable is the experience of the exporter, which he can get here. In addition, it shows others that anything is possible.

Of course, often a very small volume is exported by air. Therefore, in addition to air transportation to the above countries and to Singapore, Uzbekistan exported cherries by road to post-Soviet countries. Accordingly, export volumes were significantly higher. 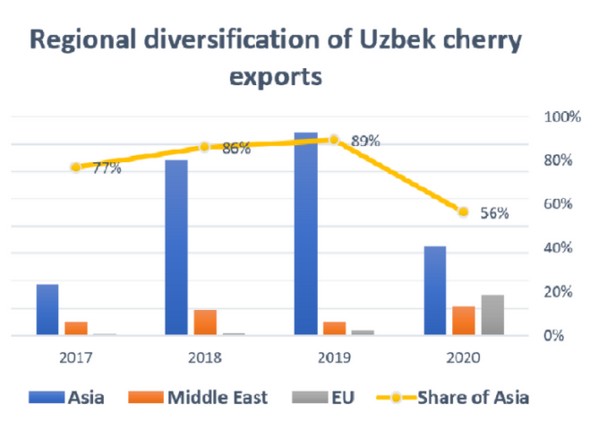 Naturally, the Asian direction dominates here – China and South Korea imported more than 700 tons of fresh cherries from Uzbekistan in the best export season. Although this is less than 1% of the cherries produced in the country, it had a positive impact on the market. After all, the best quality cherries were selected for export to these countries.