AppHarvest to expand into berries and leafy greens 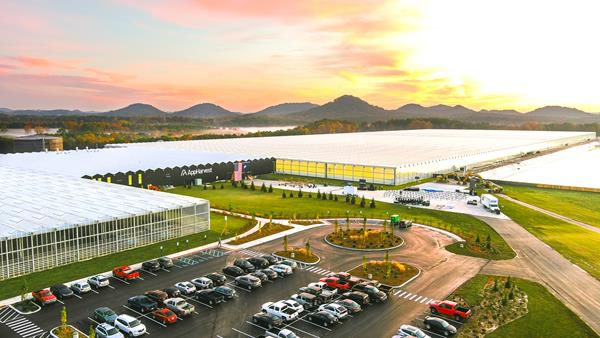 Appalachian greenhouse company AppHarvest generated $2.3 million in net sales in the first quarter 2021 as it began harvesting from its initial high-tech indoor farm in Morehead, Ky., representing 3.8 million pounds sold with the farm only partially planted as the facility ramped up.

“At our flagship farm in Morehead, Ky., our expert growers have ramped up production of the full 60 acres as of the first week of May,” said AppHarvest Founder and CEO Jonathan Webb. “The team is putting in place the right infrastructure for growth.”

Two more high-tech farms are now under construction—one in Berea, Ky. designed to grow leafy greens, and another in Richmond, Ky. planned for tomatoes, and the company plans to move ahead on two more projects this summer which will put them at five operating farms by the end of 2022.

“They are slated to grow additional products including strawberries and leafy greens,” Jonathan reveals. Two more projects are slated for development. “We are well on track for 12 farms by the end of 2025,” he concludes.

The plans were revealed with the presentation of the Q1 results.

AppHarvest has a long-term distribution agreement with Mastronardi Produce to sell all USDA Grade No. 1 tomatoes in top retail grocery and food service outlets – and the company confirmed this morning they are shipping full truckloads to retail customers such as Kroger and Wendy’s building on AppHarvest’s existing relationship with Mastronardi.

Chief Technology Officer Josh Lessing, Root AI’s former CEO, is leading the effort to build a digital operating model for farming with AI at its core that can manage a global network of facilities to execute complex supply chain strategies autonomously with higher returns.

Based on its modeling, the company expects its investment in technology to drive both top and bottom-line results at its Farm of the Future facilities, and the technology investments are expected to raise annual run-rate adjusted EBITDA for a future 60-acre vine crop facility by approximately $7 million.