Queensland farmers Andrew and David Moon, from Moonrocks, picked up the top award at the National Awards for Excellence Gala Dinner, being crowned Grower of the Year.

Moonrocks is a fifth-generation family farm in St George producing vegetables including Onions, Garlic and Broccoli

“The Grower of the Year Award is the highest accolade in Australian horticulture and reflects Andrew and David’s dedication to their business and their tireless efforts on behalf of the horticulture industry,” AUSVEG CEO James Whiteside said. “Andrew and David are actively involved in the vegetable and wider horticulture industry, with Andrew previously serving as Chair of Onions Australia and David a former Board Member of Hort Innovation. Andrew and David have transformed their business into one of the most innovative and successful growing operations in Australia, which has been built on a strong foundation of consistent quality through environmentally sustainable farming practices and attention to detail.” 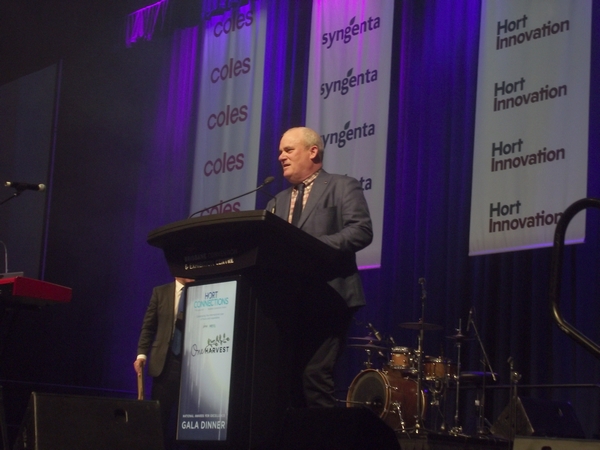 Photo: Andrew Moon giving his acceptance speech after winning Grower of the Year

The dinner capped off the three-day Hort Connections conference in Brisbane, with every sector of Australian horticulture celebrating the significant contributions of the industry and its members.

There were more than 2,000 delegates at the event which featured a trade show of around 200 local and global supply chain partners.

During the week, Growcom hosted the Queensland Horticulture Export Congress and dinner, where Moffatt Fresh Produce took home the award for Exporter of the Year and Green Valley Fingerlimes won the New Exporter Award.