The orange is the main citrus fruit produced in Benin. After the banana, it is also the second most produced and marketed product in the country. Oranges are also very popular on the local market because of the many enzymes, vitamins and minerals they contain. They are especially popular among the Muslim population of the country during the month of Ramadan for the breaking of the bread (Iftar).

Climate change already has greatly impacted the sector, with an abundance of small calibers and increasingly more limited yields over the past decades. But the production in Benin is mostly affected by a number of factors hindering its development. The orange yield barely reached 1.46 tons/ha in 2019, the fourth lowest yield in the world. Fabrice Afloukou, phytopathologist specialized in the pathology of citrus fruit, obtained his doctorate from the University of Çukurova (Turkey) and is now a research assistant at the Laboratory of Phyto-technology, Improvement and Protection of Plants (Faculty of Agronomy/University of Parakou). He shares the challenges and prospects of citrus fruit farming in Benin. 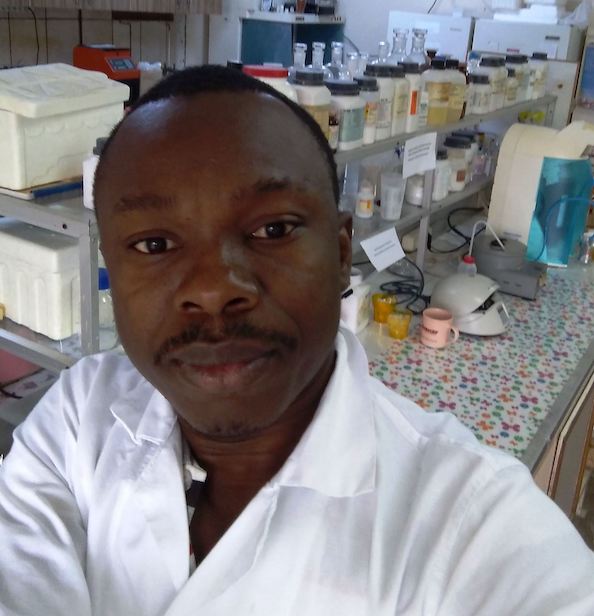 The current sanitary state of the orchards is poorly known in Benin
“Everywhere in the world, citrus fruit production is generally limited by a number of diseases that have significant economic consequences. This is particularly the case of diseases caused by necessary parasites (viruses, viroids, phyto smas, mycoplasmas),” explains Dr. Fabrice Afloukou.

“In Benin, the current sanitary state of the orchards is poorly known. Symptoms of the citrus tristeza virus, the most dreaded citrus virus, were reported in most of the country in the 1970s. Benin has actually faced massive infections from the virus in the past. Insects carrying the virus (Aphis gossypii and Toxoptera aurantii) are present in the country’s citrus orchards. Additionally, the virus was recently reported in abundance in some Nigerian states (Ogun, Osun, Oyo and Lagos), near the production areas in Benin. In spite of it all, no recent study has been carried out to determine the presence, epidemiology or characterization of the virus. The same goes for the exocortis disease, which is responsible for significant losses throughout the world. Other diseases (citrus psorosis, Huanglongbing, citrus stubbornness, citrus xyloporosis…) yet to be identified could also be present in the country’s orchards.” 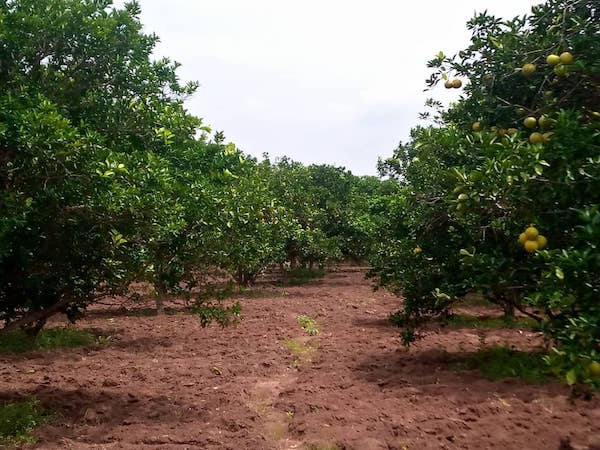 Strong pressure from diseases and pests on citrus fruit in Benin
“When the commercial orchards were set up, many citrus fruit varieties were introduced in the country between 1961 and 1972. The sensitivity to diseases and pests and poor adaptation to local land and climate have led to the abandonment of several varieties. The citrus fruit varieties in Benin now include Mexican limes (citrus aurantifolia), Ranpgur (c. limonia), common mandarins and clementines (c. clementina Hort. Ex Tan), Tangelo Minneola, Wekiwa and Orlando (c. reticulata x c. paradisi), Tangor Ortanique (c. reticulata × c. sinensis) and tangerine Dancy (c. reticulata Blanco) as well as grapefruit (citrus paradisiMacfad ) Shambar and Marsh.” 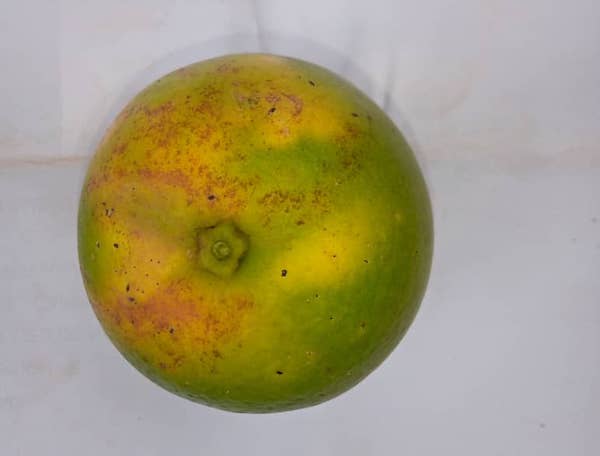 Among the oranges, Hamlin, Pineapple and Valencia are the most widespread varieties in the country’s orchards. “The Pineapple variety is so sensitive to the tristeza virus that it is used as an indicator of the disease worldwide. The main rootstock used in the country is the Rangpur lime tree, which presents two major problems: its sensitivity to the exocortis disease (citrus exocortis viroid) and to gummosis phytophthora.”

In addition to diseases, pests are responsible for significant losses in the orchards. “The termites dig galleries in the trunks of the citrus plants. The fruit flies make the fresh fruit unfit for export because of the stains left by the bites on the surface of the fruit. The citrus leafminers (Phyllocnistis citrella) are a serious problem for the nurseries and young orchards. The mealy bugs produce honeydew on which fumagina grows. 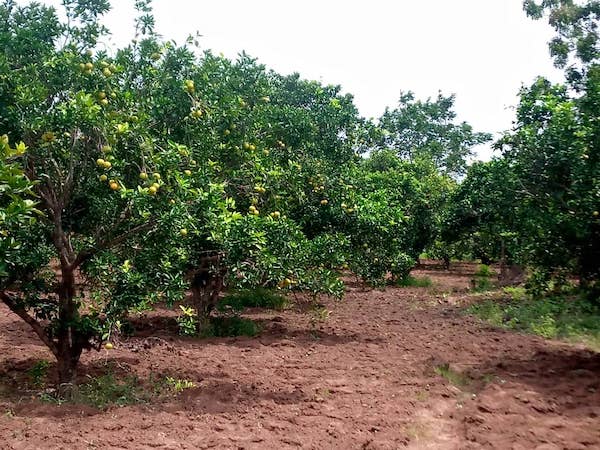 Poor management of the nurseries
For decades now, the orchards and nurseries have been poorly managed. They were built directly on the ground, which exposes the grafts to Phytophthora spp. The young plants are transported with bare roots. They are often badly grafted and in precarious sanitary conditions. In some areas, the plants are not even grafted. The orchards are planted very densely and left exposed to nature’s hazards. The trees are rarely pruned, irrigated or treated against pests and diseases. The practice of combining citrus fruits with other crops is dangerous when these crops are faced with the same pests, therefore increasing the pressure on the citrus fruit.

“Finally, because of the poor management of the fruit after the harvest, low processing rate and lack of organization of the value chains, many of the fruits are lost after being harvested.” 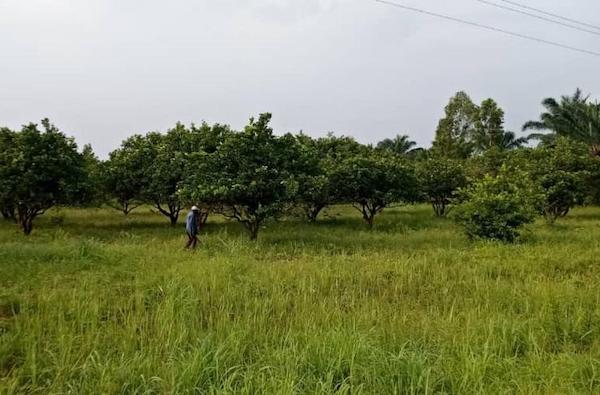 The Zou department is the most favorable for citrus crops
Benin has three climates: subtropical, Sudano-Guinean and Sudanian.

“Citrus fruits need 21-30°C on average and 1,016-1,143mm of water, well spread for optimal physiological activity. The Sudanian area (950-1,300 mm of water/year, average temperature of 17-33°C, relative humidity of 20-47%) with its long dry season of 6 months could inflict severe water stress on the citrus fruit unless irrigation is used. The plantations in the sub-equatorial region (950-1,500mm of water/year, average temperature of 24 to 31ºC and average relative humidity of 58-95%) will be faced with more fungal and bacterial diseases.”

“The reasons mentioned above have surely guided the pioneers of intensive citrus fruit farming in Benin to set up most of the crops in the Sudano-Guinean (1,200mm of water/year, average temperatures of 22.5 to 35.2°C, average relative humidity of 30-83%) and sub-equatorial regions of the country in the 1960s. Citrus collections were therefore planted in Toué/Bohicon, Sékou/Allada, Allahè/Za-kpota. A woodlot is located in Toué/Bohicon and rootstock trials in Allahè/Za-kpota. Some orchards have been planted almost everywhere in Akassato country in Manlanville, but the Zou department in the center of the country has proved to be the most favorable for citrus fruit farming.” 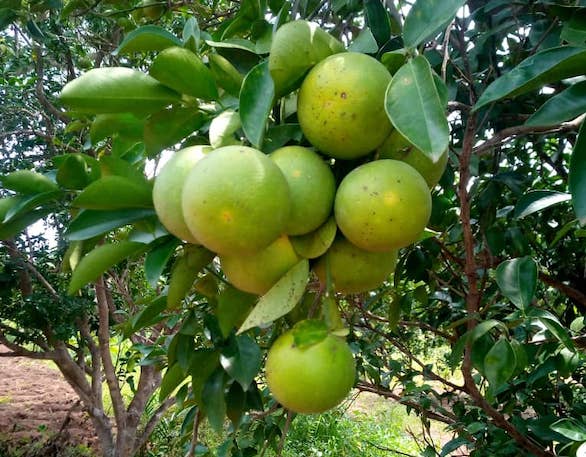 Green citrus fruit: an obstacle to exporting to Europe?
“Generally speaking, the night temperatures above 13-15°C, especially during the fruits’ ripening phase, are responsible for the green color of the ripe fruit in the tropical regions contrary to the temperate areas (Mediterranean basin for instance), which give orange or yellow fruit depending on the type of citrus fruit. This state of affairs could be an obstacle to the export of fresh citrus fruit from Benin to Europe.”

Increasingly more extensive orange production in Benin
“A study conducted by Félicien Akohoue and his collaborators in 2017 in the Zou department, estimates the average size of the citrus orchards to be 3.18 hectares. Besides, the graph below shows the yields and surface areas harvested from 1960 to 2019, revealing that the orange production is increasingly more extensive in the country. 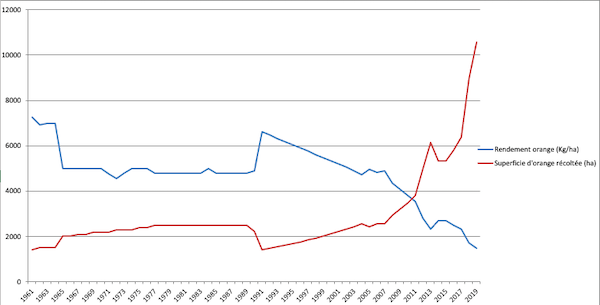 The citrus fruit sector: a possible solution to Benin’s socio-economic problems
“The current citrus fruit situation is very concerning, but simple solutions adapted to our means and conditions exist and are waiting to be implemented. The citrus sector could be an excellent solution to Benin’s socio-economic problems by generating significant revenue. For example, Turkey produced 4.30 million tons of citrus fruit in 2019 and exported 1.60 million tons for a value of over 750 million USD. Benin’s advantage in terms of soil and weather conditions, compared to its neighboring countries (Burkina-Faso and Niger for example) should incite the authorities and partners of development to concentrate their efforts on the citrus sector in Benin.” 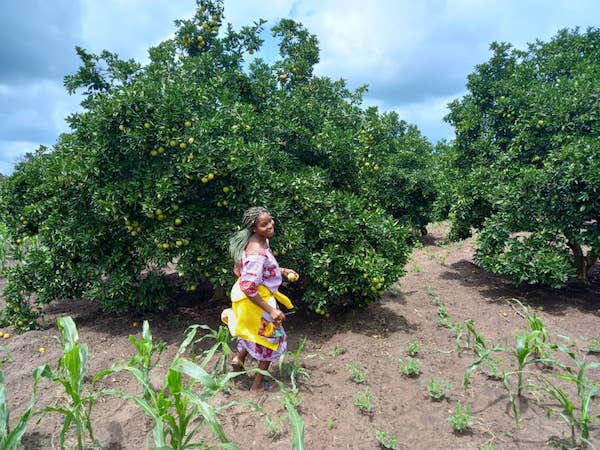 “The second area for improvement concerns pest management in the strict respect of the environment and consumer health, because some pests carry diseases. The use of biological pesticides is a serious route. Finally, there must be an inventory of all the pests present in the country’s orchards.” 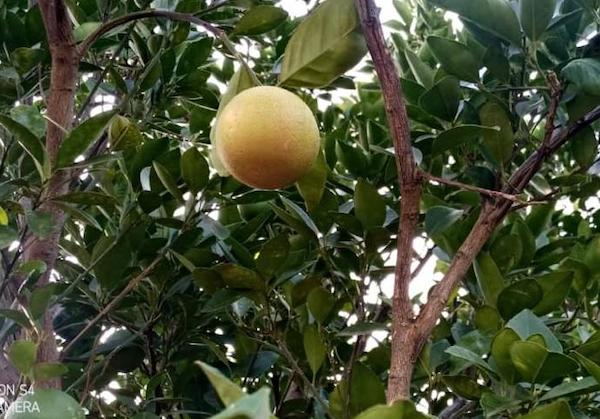 Training nurserymen and citrus fruit growers is essential
“Training nurserymen and citrus fruit growers on the good practices to grow citrus fruit is essential. Nurserymen need to improve their ability to manage citrus nurseries. Disinfecting grafting and pruning tools with bleach concentrated at 2-5% must become common practice. On the other hand, placing young plants on the ground, grafting too close to the collar, transporting young plants with bare roots and using heavy non-sterilized soil on which to put the nursery are not recommended practices.”

The density of the orchards should also be reduced. Spacing of about 7x7m, 7×7.5m and 8x8m should ensure a good aeration of the plantations and less competition between the plants for access to sunlight.

“Combining crops in the citrus orchards carries some risks. Combining citrus fruit with corn or cotton for example could increase pest pressure on the fruit, as all three of these crops share the cotton aphid (Aphis gossypii Glover) and the carrot aphid (Myzus persicae) as pests, as well as two important vectors of the citrus tristeza virus. Combining citrus fruit with tomato crops could be the basis for the mechanical transmission of exocortis from one crop to another.”

“Additionally, developing and using specific fertilizers for citrus fruit is essential in each agro-ecological area of the country where the fruit is produced. It is necessary to promote the mechanization of weeding operations, phytosanitary treatment, pruning, harvesting and picking of rotten fruit in the orchards… The support from public authorities and partners to popularize pole saws, telescopic pruners, electric sprayers, motorized or non-motorized mechanical weeding tools, is necessary to reduce the demand for increasingly scarce labor.” 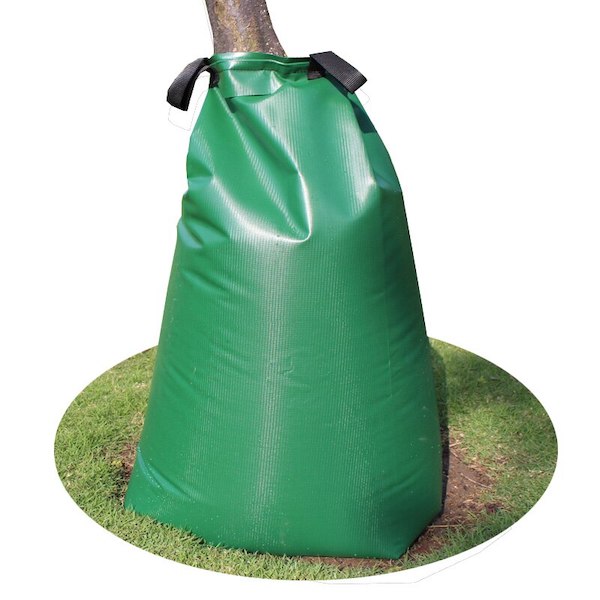 “In terms of reducing the effects of climate change, it is necessary to set up irrigation methods that are simple and inexpensive (watering bags for trees or jugs coupled to the irrigation system) in order to reduce the plants’ water stress a bit as the dry seasons become longer and drought pockets are visible in the middle of the rainy season. Finally, the shelflife of the fruit harvested can be improved by treating them with fungicides (Imazalil, thiabendazole, sodium ortho-phenylphenate, fludioxonil and pyrimethanil) before transporting them in plastic crates rather than baskets.”