Tendency for a slight confidence increase after autumn 2020 The Copa-Cogeca confidence index is calculated twice a year on the basis of the results of national surveys carried out in Belgium (Flanders), Germany, France, Hungary, Italy, the Netherlands, Poland, Romania, Sweden and the United Kingdom (England and Wales) on how farmers assess the current and expected economic situation of their farms. The confidence survey saw a tendency for a slight increase after autumn 2020. Still, the results across countries and within countries are quite diverse.

Where the sentiment has improved, it has improved significantly but remains overall in the negative spectrum. In other countries, the sentiment remained stable or has even decreased, with Italy continuing its decrease. In general, the results of the survey show a bit more optimism for the future. 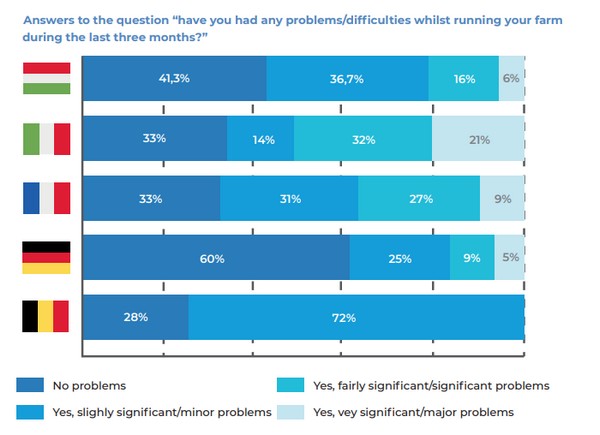 The chart above shows that in spring 2021, the proportion of those replying that they did not face any problems slightly increased compared to autumn, with a big proportion of German farmers having faced no problems (60% of farmers), followed by Hungary (41,3%). France and Italy were at the same level (33%). Belgium had the lowest share of farmers with no issues, but increasing since last survey and now representing 28%. On the other side of the spectrum, the highest share of farmers facing very major issues was recorded in Italy with 21% and France with 9%. Belgium did not have any farmers in this category.

Amongst the issues most commonly encountered were price decreases of agricultural prices, weather conditions, health and environmental regulations.