UK next steps for peace and stability in Chad, Central African Republic and Cameroon 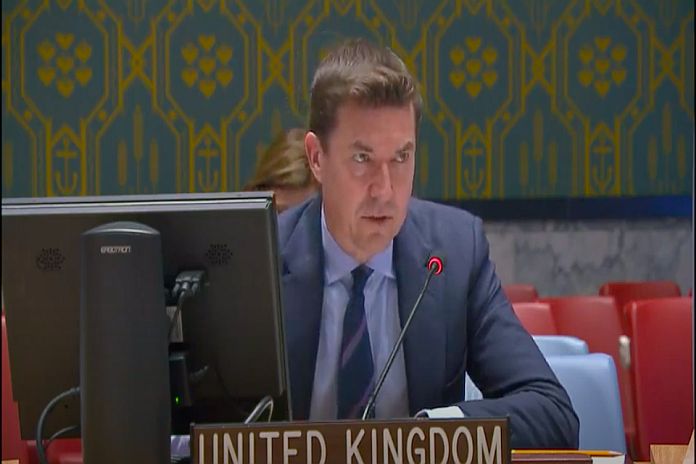 LONDON, England – The following is a statement by ambassador James Roscoe at the Security Council briefing on the UN Regional Office for Central Africa

“On behalf of the United Kingdom, I want to express our thanks to SRSG Fall for his continued efforts to support and promote peace, stability and security in Central Africa, particularly amidst the COVID-19 pandemic and its impacts.

We welcome recent progress in the region, particularly the establishment of the new ECCAS Commission. But as SRSG Fall has set out, Central Africa continues to face serious political, economic and security challenges which have been exacerbated by Covid-19.

We commend UNOCA’s ongoing efforts to coordinate with UN country teams across the sub-region and deploy the UN’s good offices to prevent, mediate and resolve conflicts across Central Africa. I would like to focus on the next steps needed in this respect in three of the country situations we have heard about today.

Firstly, Mr President, let me turn to Chad. The United Kingdom deplores the violence and repression of protestors in Chad in April. We support the AU’s recommendation that the Transitional Military Council should respect human rights, provide an inclusive constitutional framework and conduct free and fair elections within 18 months. A stable Chad is pivotal for the Chadian people as well as the wider Sahel region.

Secondly, turning to the Central African Republic, I understand that we will have the opportunity in closed consultations to discuss the recent very troubling clashes across the border between Chad and the Central African Republic. The last thing the region needs is increased instability and mistrust between neighbouring countries, and so all actors should encourage de-escalation of those tensions.

Within the Central African Republic itself, following the recent presidential and parliamentary elections there is an opportunity to build on this democratic trajectory towards peace and reconciliation. We hope that all stakeholders will redouble efforts to strengthen political inclusivity, protect and promote human rights and meet the needs of the population, including with respect to basic security and humanitarian needs.

Thirdly, Mr President, The United Kingdom also remains deeply concerned by the ongoing crisis in the North-West and South-West regions of Cameroon. In March the UK’s minister for Africa visited Cameroon and met president Biya and prime minister Ngute, encouraging them to renew efforts to achieve a peaceful resolution to the crisis.

On his visit our minister saw first-hand the profound impact of the crisis on civilians. Over a million people have been displaced due to the conflict, and over two million are in dire need of humanitarian support. Unimpeded humanitarian access is desperately needed. At the same time, we continue to receive deeply concerning reports of human rights violations and abuses committed by both sides in the North-West and South-West regions of Cameroon. Accountability for perpetrators is essential for building long-term peace. And in the short term, armed actors should heed the UN Secretary-General’s call, and cease attacks against civilians.

We welcome the steps taken by the government of Cameroon to grant special status for the Anglophone regions and convene the inaugural regional elections in 2020. However, all parties should do more to end this protracted conflict in Cameroon. The UK stands ready to support parties to engage in good-faith dialogue and peacebuilding efforts. And we are supporting efforts to alleviate the suffering of vulnerable civilians through UK funding, currently totalling US$19 million, for vital assistance, food, sanitation and medical supplies.

Finally Mr President, I do want to acknowledge the very real threat that Cameroon and its neighbours continue to face in terms of terrorist attacks on civilians across the Lake Chad Basin region. The recent attack in Yagha province in Burkina Faso where over one hundred civilians were reportedly killed is a stark reminder of the grave threats facing civilians across this region. We strongly condemn all such attacks, and continue to support the efforts of the Multi-National Joint Task Force to tackle Boko Haram and Islamic State West Africa. We urge the governments of the Lake Chad Basin countries, with the support of international partners, to improve governance, demobilise and reintegrate former combatants, and mitigate the impacts of climate change on regional security.

“I’d like to finish with a thank you as I began to SRSG Fall for his extraordinary efforts across this region. We know that his personal interventions across the region with countries, with governments and with heads of States have a serious and significant effect on the trajectory of the region and we’re very grateful to him.”